The adventure in Vietnam continues, returning first to Hanoi followed by a cruise on Halong Bay. Starting in Hanoi (see part one here), we drove north to Ha Giang to spend seven days on motorcycles in the mountains. The first three days can be seen here followed by the next three here and the story of our last day on the bikes along with lessons learnt along the way here.

In the bus on the way back to Hanoi I was reminded of some good advice given; be happy wherever you find yourself whether that be on a plane, in a taxi or in a client’s reception. The wisdom of the advice was hit home on the bus as I enjoyed reading my book and listening to music; instead of impatiently wishing to get to Hanoi. Really the destination is less important than the journey.

Dinner at Highway 4 in the French Quarter was an absolute delight. The restaurant is a Vietnamese take on the Japanese Izakaya drinking and dining house, with fresh, tasty meals and lots of alcohol. This was our best meal of the trip with superbly cooked chicken and fish dishes, augmented by deep-fried locusts for the adventurous; the latter was delicious, deep fried in pig fat and lemongrass. This was followed by a visit to the Bình Minh Jazz Club where we listened to great jazz in a laneway behind the Opera House.

The next morning we hopped on another bus, this time heading four hours south to Halong Bay. This was not part of the original itinerary, however, after two days in Hanoi, we decided to decamp to a less hectic part of Vietnam. Entering Halong Bay and it seemed as though everyone else had decided to do the same thing. There was an incredible number of tourist buses and cruise boats sitting in the bay along with modern hotels and apartment houses. 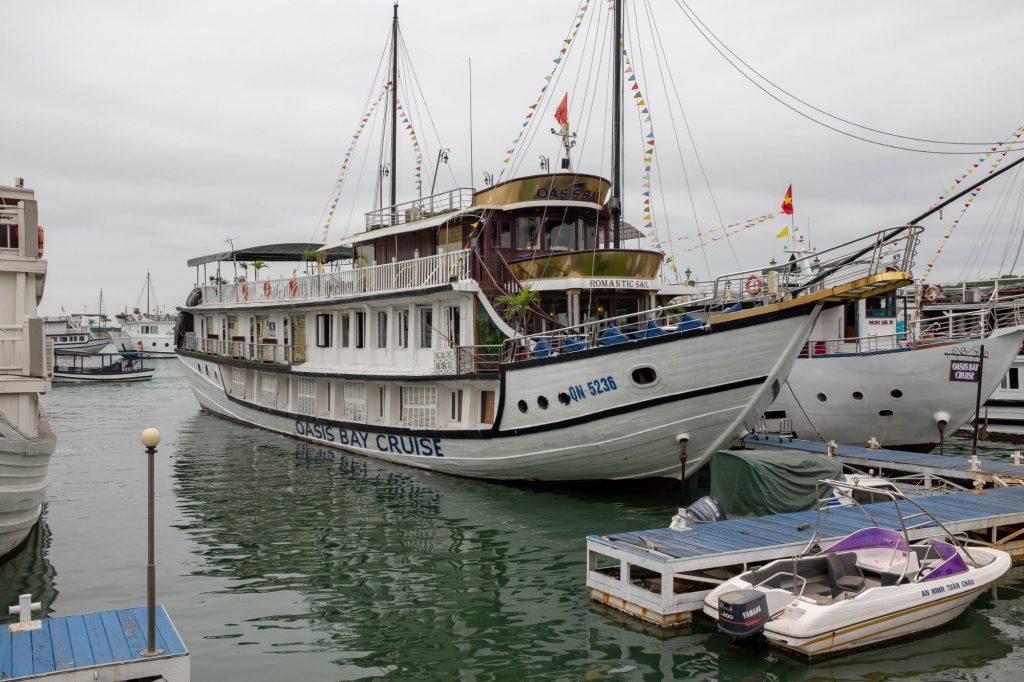 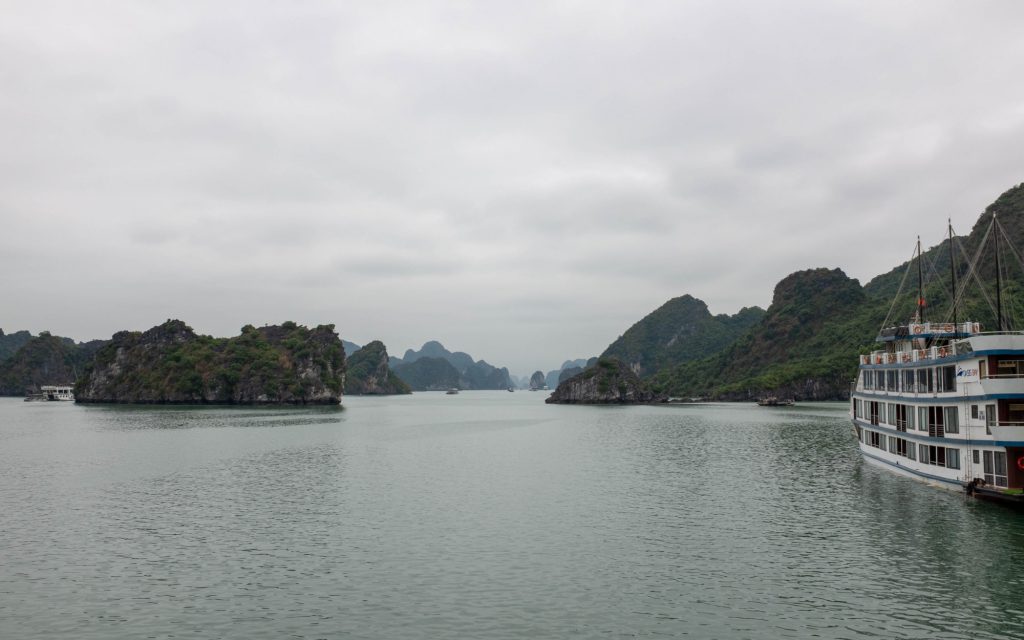 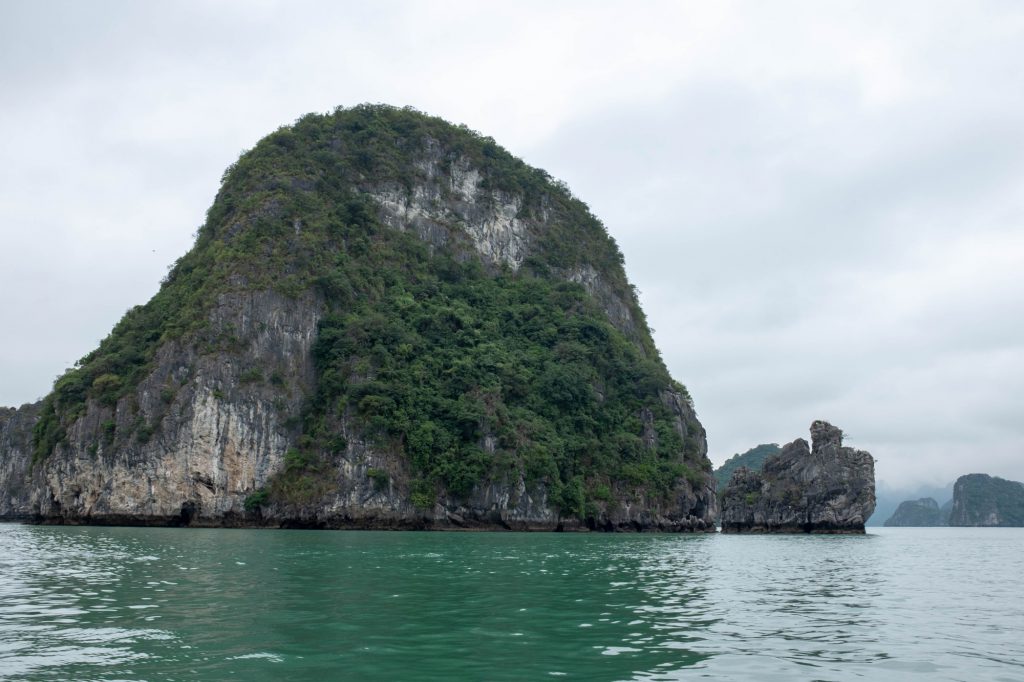 On the boat, a sense of relaxation descended on the crew as the clean air and peace marked a sharp contrast to the busyness of Hanoi. As we made our way out into Halong Bay—the word means Dragon Descending—, the beauty of this place with its multitude of small mountains immediately impresses. In fact, I realised that this was the highlight of the trip for me; even surpassing motorcycle riding in the mountains.

The beauty of Halong Bay was increased by the charm and sophistication of the Oasis Bay Cruise ship with its wood panelling and brass fixtures. This was an unexpected delight with the food and service a good match for the boat. The older style of the ship and high service levels brings to mind Agatha Christie’s Death on the Nile, with each of us wondering when Poirot would appear in a silk dressing gown.

The ship had a series of planned activities for our overnight stay. After a delicious lunch, we set off in kayaks into Frog Pond, so named for the shape of the bay when viewed from the sky. It was very peaceful being in this lagoon as we navigated a small entry into the bay beyond; accessible only at low tide, otherwise, you are trapped in the natural crater. 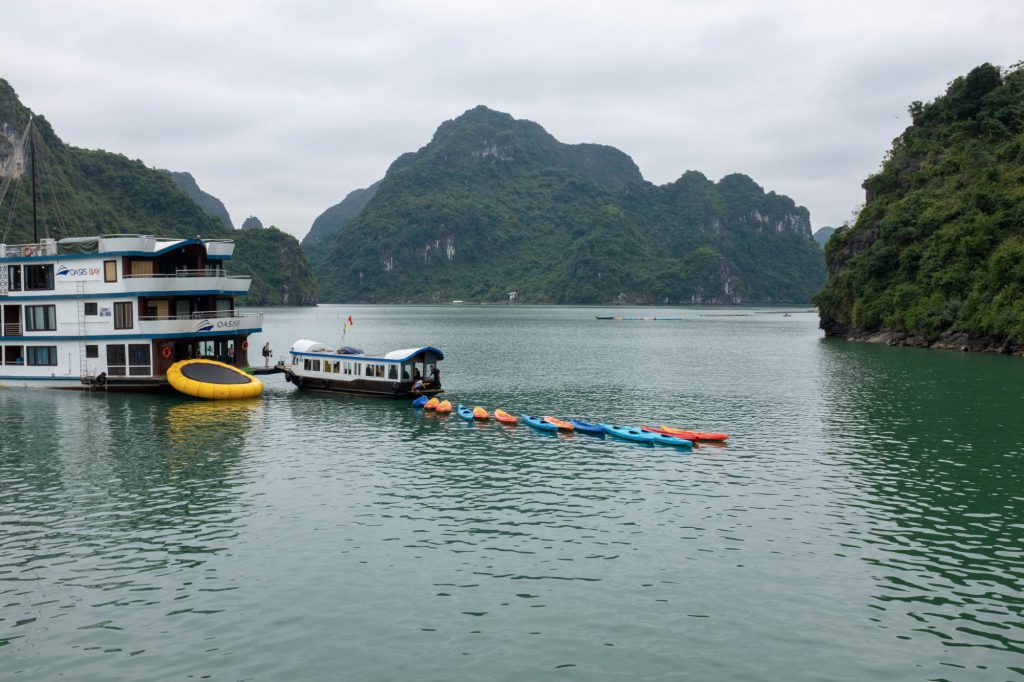 Back at the ship, we leapt off the bow and swam in the bay. While a little chilly, this was another great experience, floating in Halong Bay. This was followed by cocktails served in the outdoor hot tub, with a hot stone massage and dinner capping off a very satisfying day.

At dawn, there was Tai Chi on the roof, an activity that enlivens your body in spite of the seemingly limited movements. The Tai Chi master was wearing a set of white silk PJs as he went through the series of moves adding up the sense of occasion. 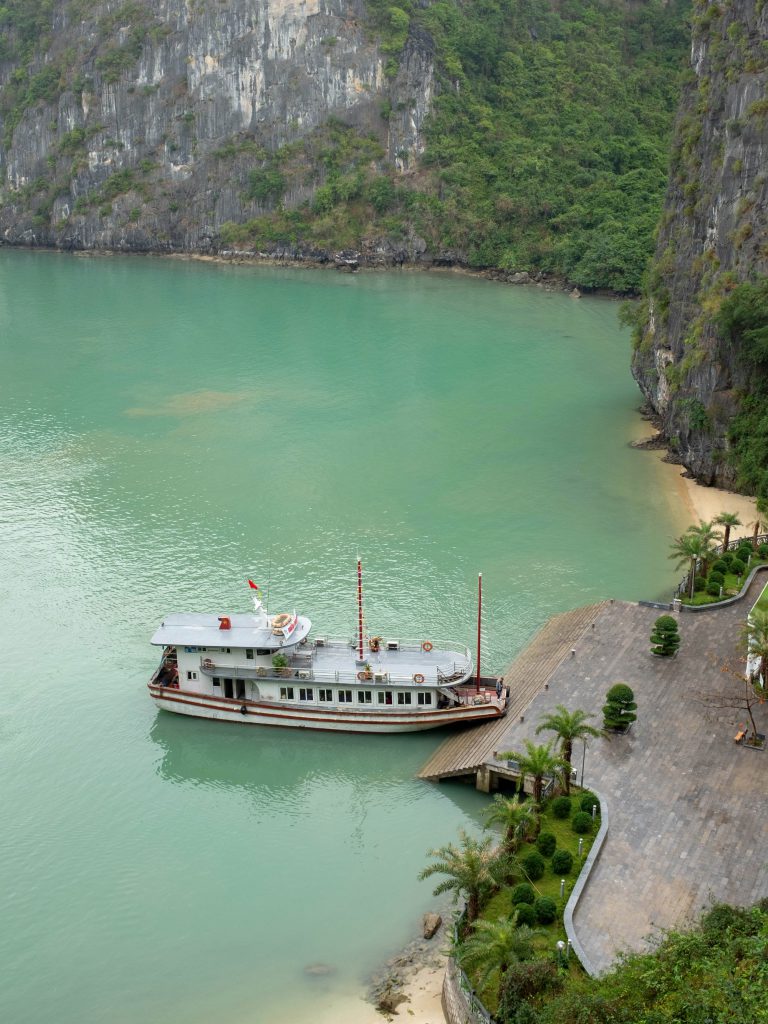 After a light breakfast, we took the tender boat out to the ‘Surprise Cave’; the largest of the calcium carbonate (limestone) caves in Halong Bay. The Vietnamese government has done a great job in making the cave accessible and lighting it for maximum visual impact. There are countless stalagmites and stalactites formed over thousands of years in this spectacular cave. 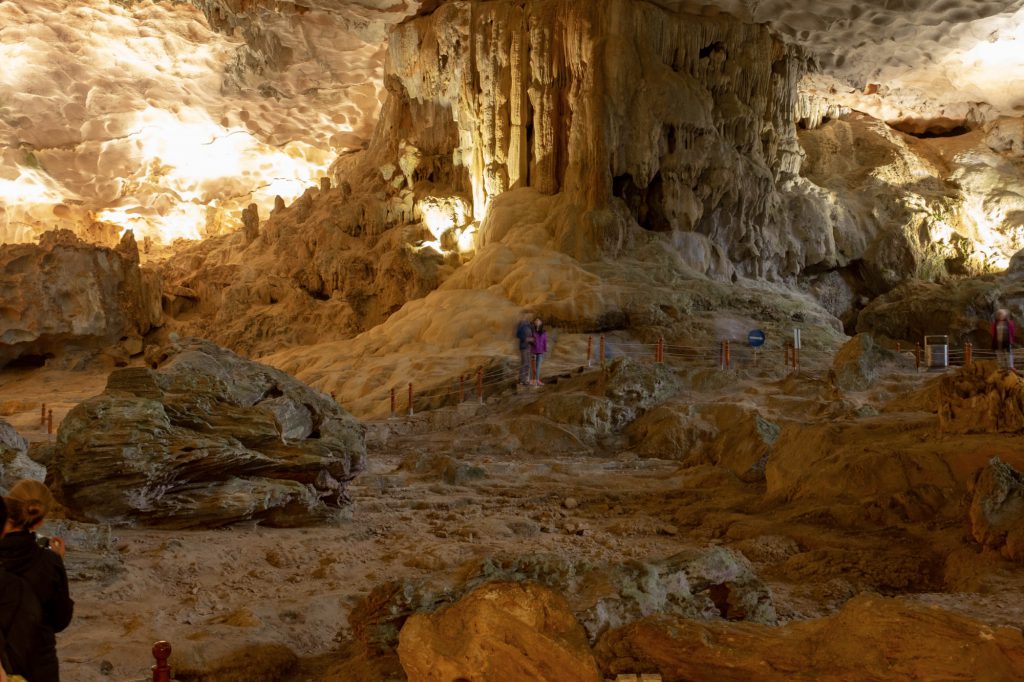 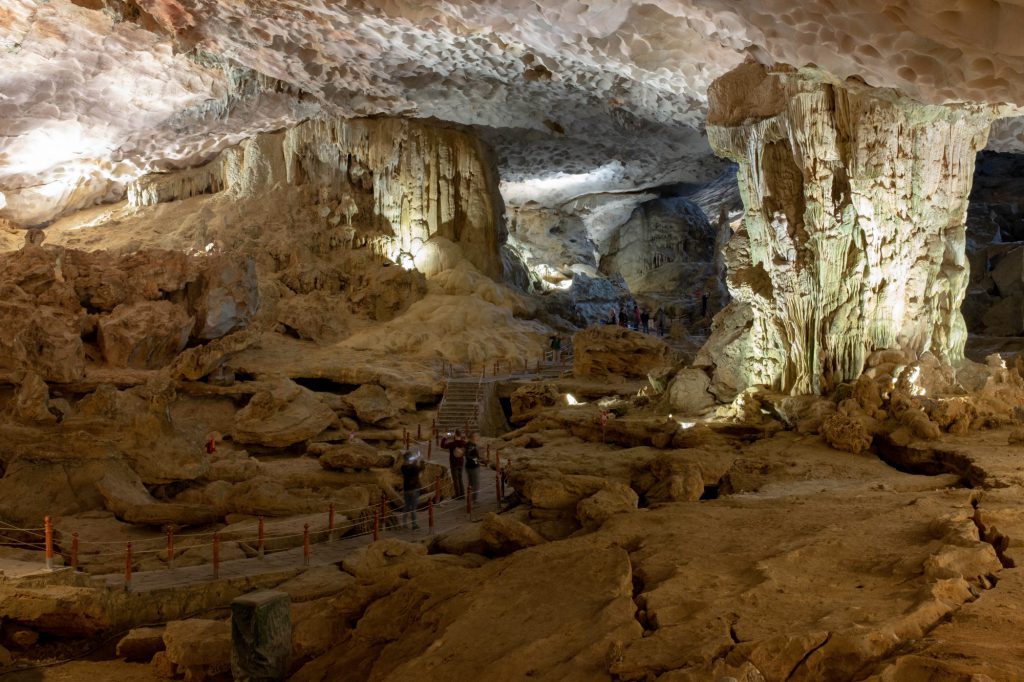 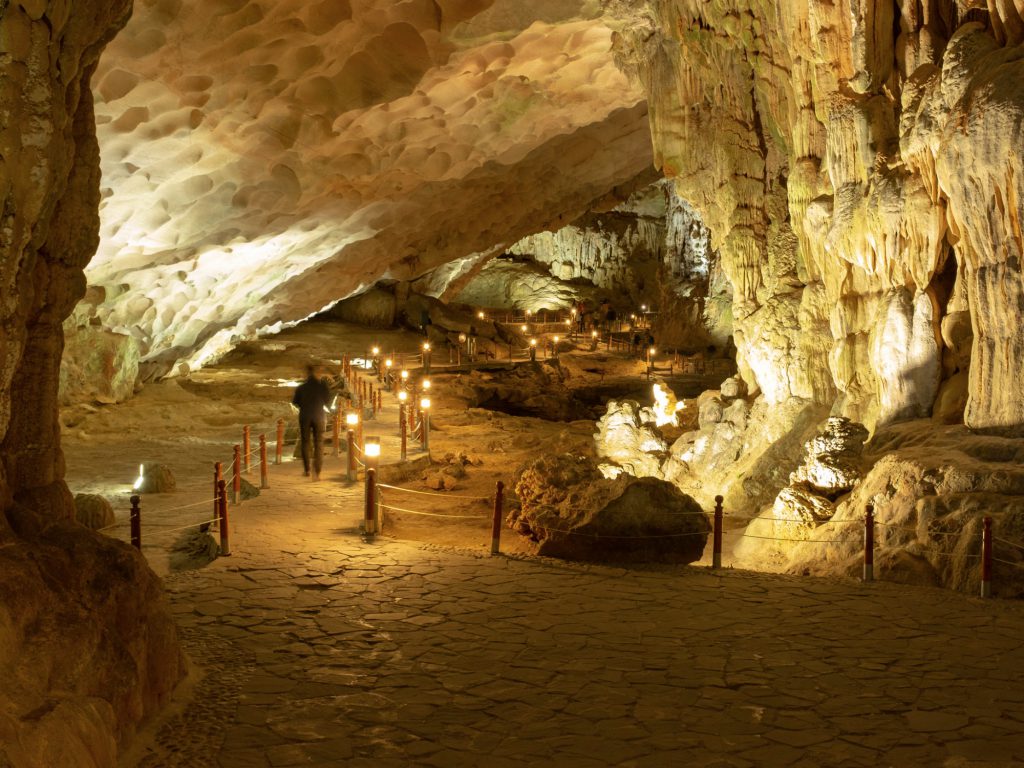 Back on the bus, we set off for our last night in Hanoi to buy silk and local artwork in the Old Quarter. The Hadong Silk boutique was very smart, contrasting sharply with the tourist offerings on every street corner. I bought an elegant scarf, along with local artwork of a skateboarder in traditional Vietnamese attire.

While walking around the Old Quarter, we spotted an enterprising entrepreneur at Durty Bird who came up with a burger to celebrate/parody the meeting between Donald Trump and Kim Jong-un which gained international attention; the Russian television crew was recording while we passed by. 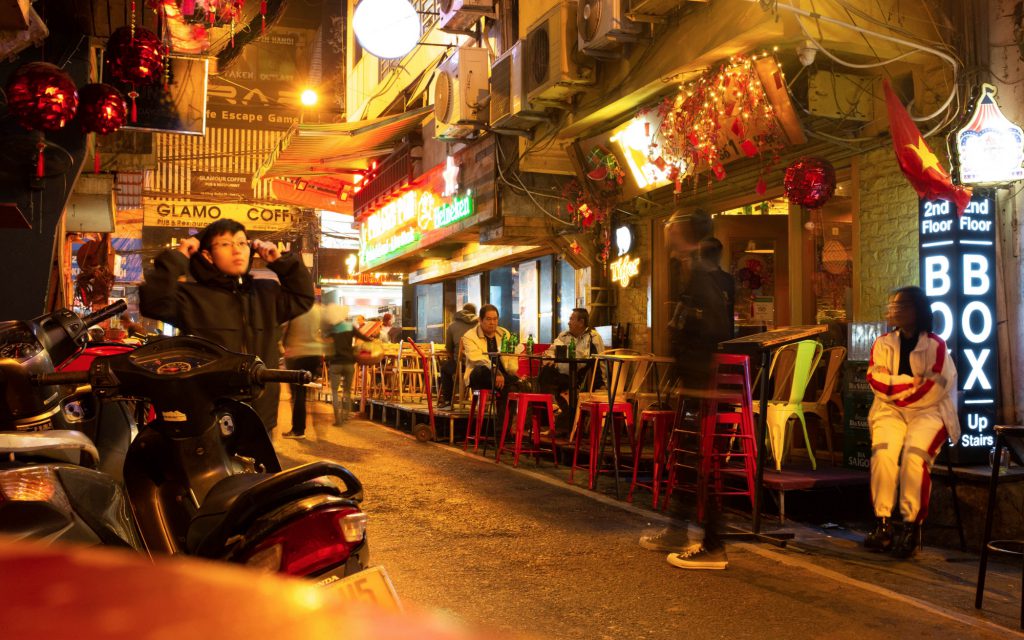 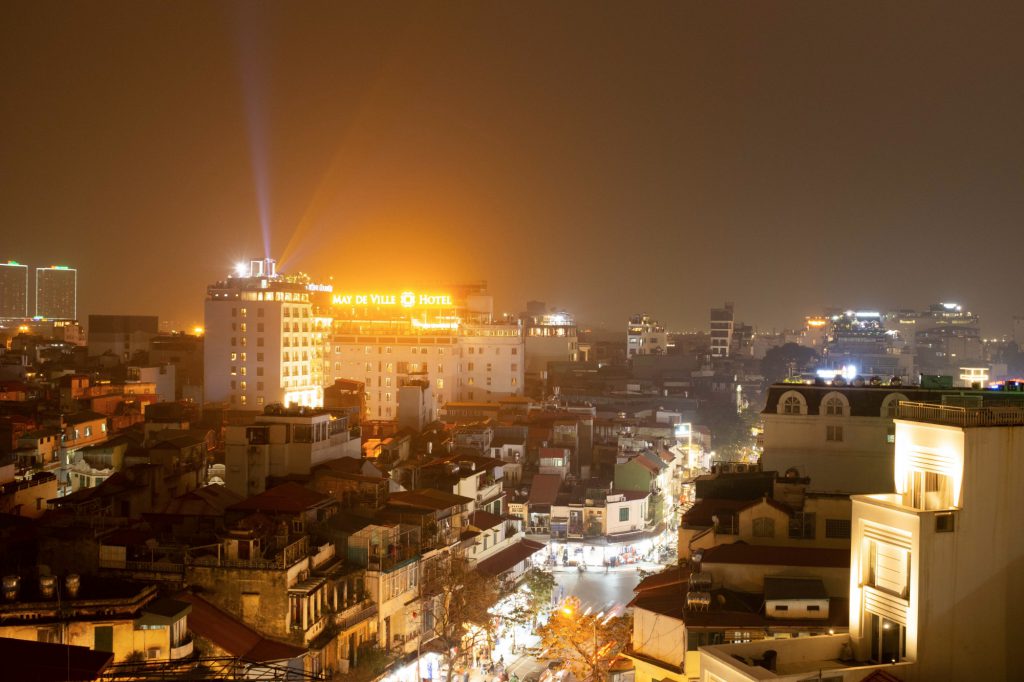 Feeling hungry, we went looking for a snack before dinner, settling on skewers cooked over hot coals from a street vendor. While waiting for them to cook, I bought some fried dough sticks, similar to a doughnut from another vendor. This caused a commotion as the vendor was overcharging me and got into trouble with one of the locals. The Vietnamese people genuinely have a good culture, protecting tourists from local scams. Nice.

Dinner that night was at Cha Ca La Vong, a one-dish restaurant serving a freshwater whitefish cooked at the table with mounds of Asian greens, noodles, herbs and chilli. It was one of the culinary highlights of the trip; be warned, the fish stomach option is a bit tough. 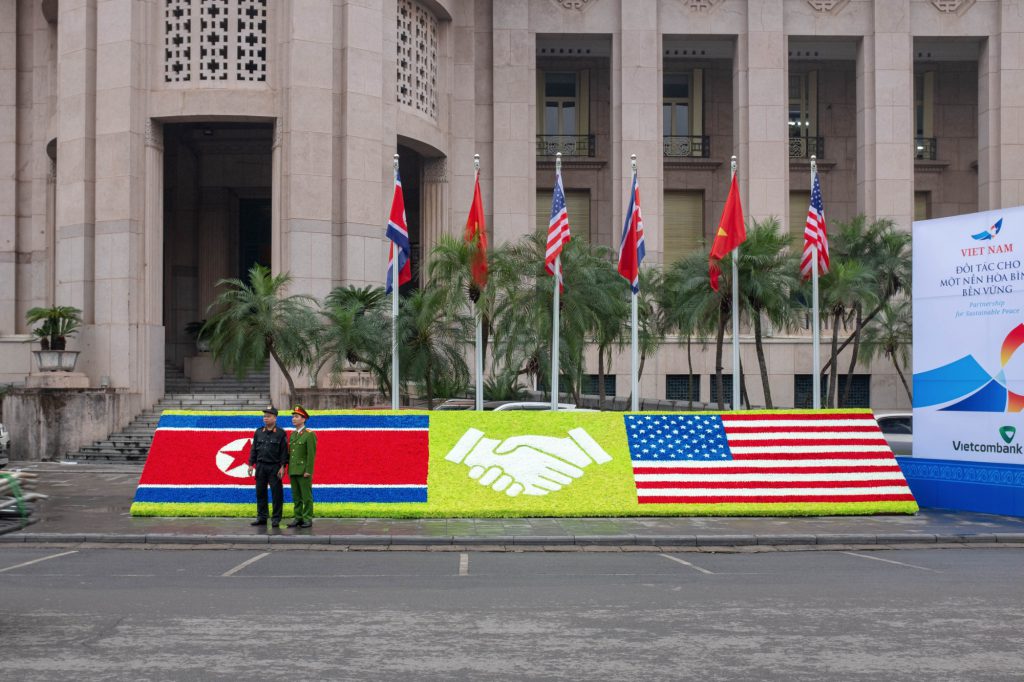 On our last morning, I walked the streets around the lake and the French Quarter. This has taken on a political air as the North Korean and American Presidents were to meet the next day. There were platoons of media people stationed along the blocked off streets. On the way, I stopped in at the Buddhist temple (Special National Vestige Sword Lake and NGOC Son Temple) on the lake. This is a beautiful and peaceful place and one I sat in for the next hour contemplating my good fortune to have been able to make this trip. 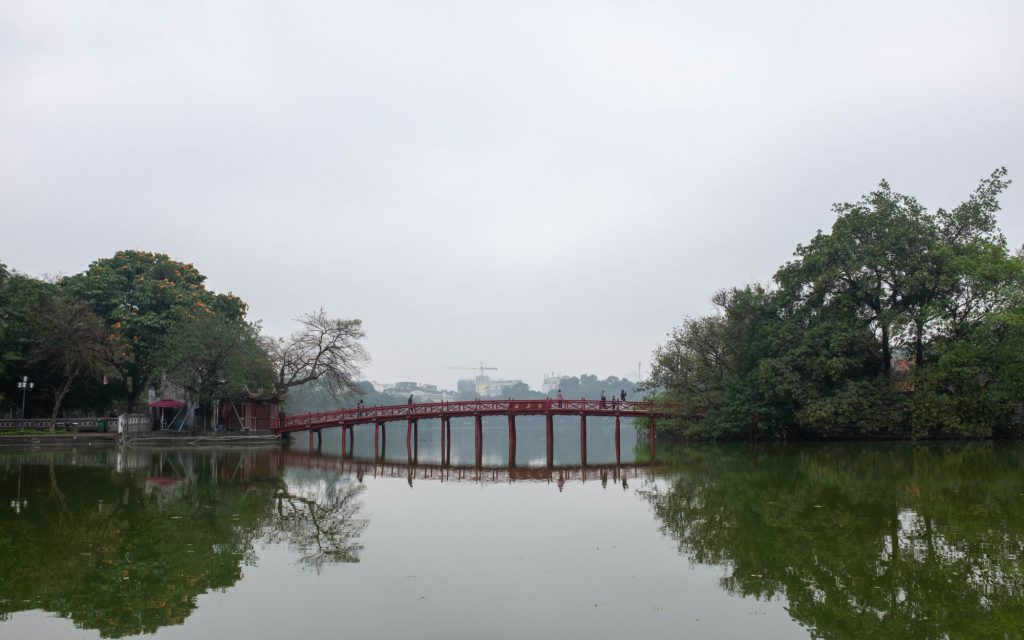 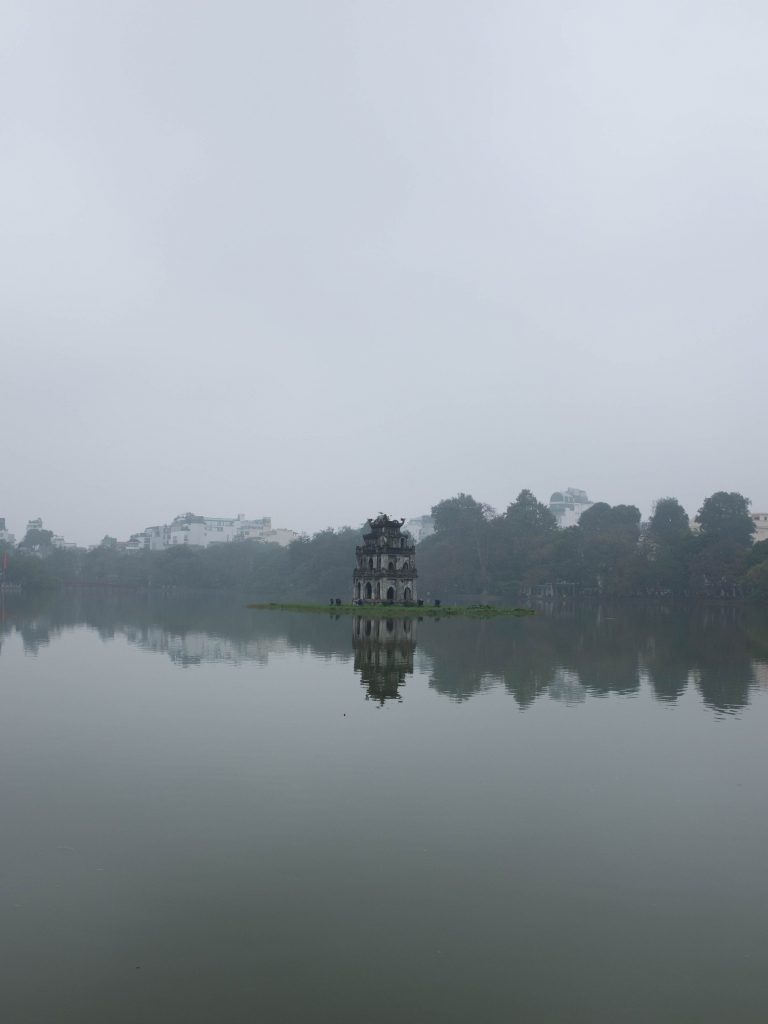 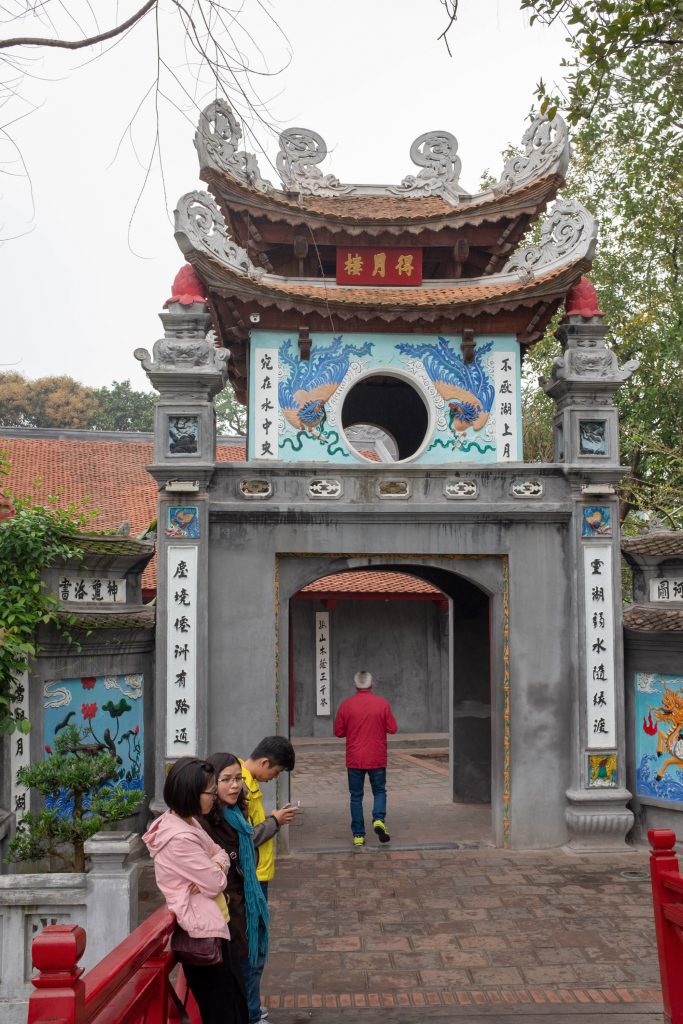 At lunch, we booked into a food tour with Ming from HA Food Tours. A sampling of eight street food stalls, this was a brilliant experience showcasing the variety of food Hanoi offers. We ate rice pancakes with pork mince with dipping sauce at Banh Cuon Ba Hanh, mixed tropical fruit with coconut milk next followed by dried beef salad green papaya, layered fish with minced pork and mushrooms, all crumbed and deep fried; sensational for its flavours and textures. Pork with noodles and a dipping sauce followed finishing with an egg coffee in the shop of the inventor of the drinks. The story of this invention is that the inventor was a bartender at the chic Metropole Hotel, making cappuccino’s for French visitors at a time when milk became nearly impossible to source. Necessary being the mother of invention, he invented another way of creating the cappuccino froth using eggs. This was served sweet. Very sweet. Lastly, we had a thin Vietnamese crispy pancake with pork and prawns. This was such a good experience that I have made a note to do this in other cities as a way of exploring the food options. 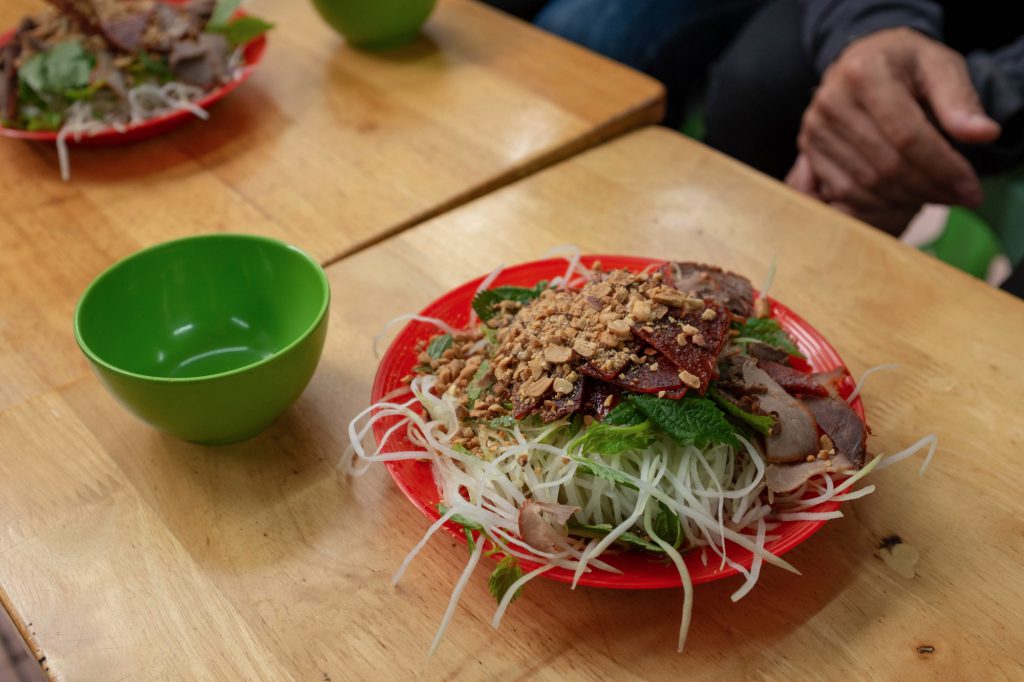 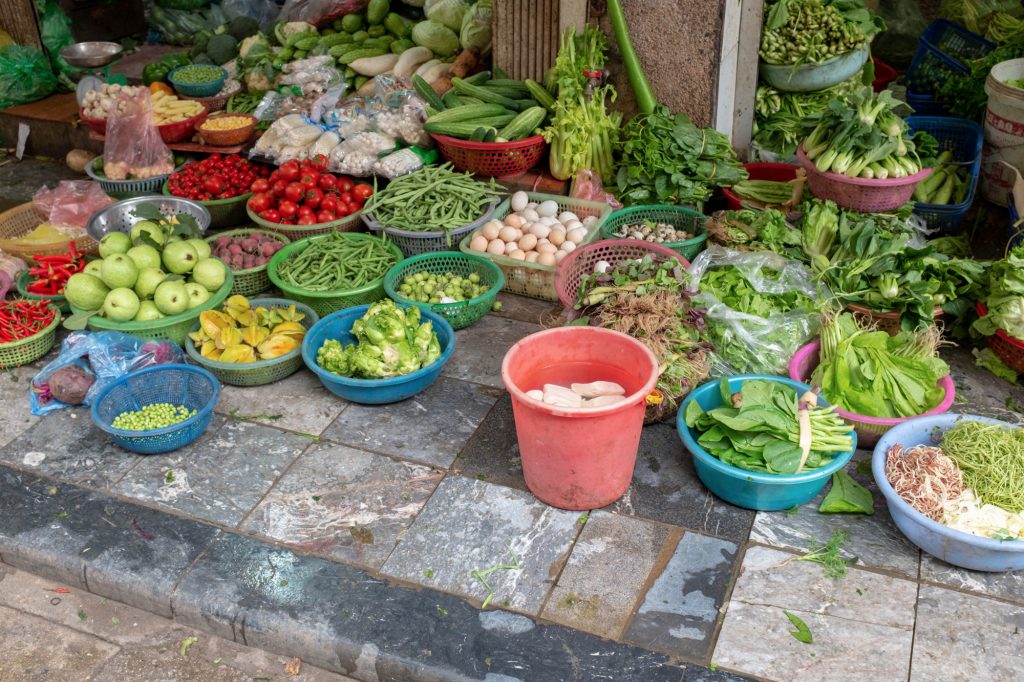 Before the airport we relaxed with a manicure, pedicure and foot massage; when in Rome and all that. It seems quite reasonable for men to have these in Hanoi as there was a 63-year-old man with a beer listening to Led Zeppelin when I was being done. Then it was off to the airport and back home.

In summary, travelling to Vietnam offers a heady mixture of the old and the new. The modern economy of the cities contrasting sharply with the rural communities who cling to an older way of life in the mountains. There is also radically different terrain from the majestic Halong Bay, to the steep mountains of Ha Giang and the verdant rice fields found all over Vietnam. This was an excellent trip and one I would recommend.