Covid19 travel restrictions have shrunk the world in which we can explore. Fortunately, Australia is a gigantic country with the region of NSW approximately four times the size of the United Kingdom. This means, road-trips for the foreseeable future. Having ridden both north and south a couple of times, it was time to head west into the desert around Broken Hill. This ride would become an eight-day, 3,000-kilometre motorcycle camping adventure.

Day one: Sydney to Merriwa via the Putty Road | 353 km

The weekend began with severe thunderstorm warnings and more than a little trepidation about whether we would be able to make it to our campsite in Goulburn River National Park.  After breakfast in Windsor, we donned our wet weather gear and set off up the Putty Road. It is here that the real riding begins with 168 kilometres of winding country roads.

Stopping mid-way at the Grey Gum Cafe it was clear that one of our group did not have enough petrol to make it to Singleton. A quick siphoning from another bike provided the fuel to make it to Bulga before continuing onto Singelton in the soaking rain. There we ate a delicious Vietnamese meal at the Club House Hotel. This brought back memories of our two-week riding adventure in Vietnam as the people and cuisine felt authentically Vietnamese. 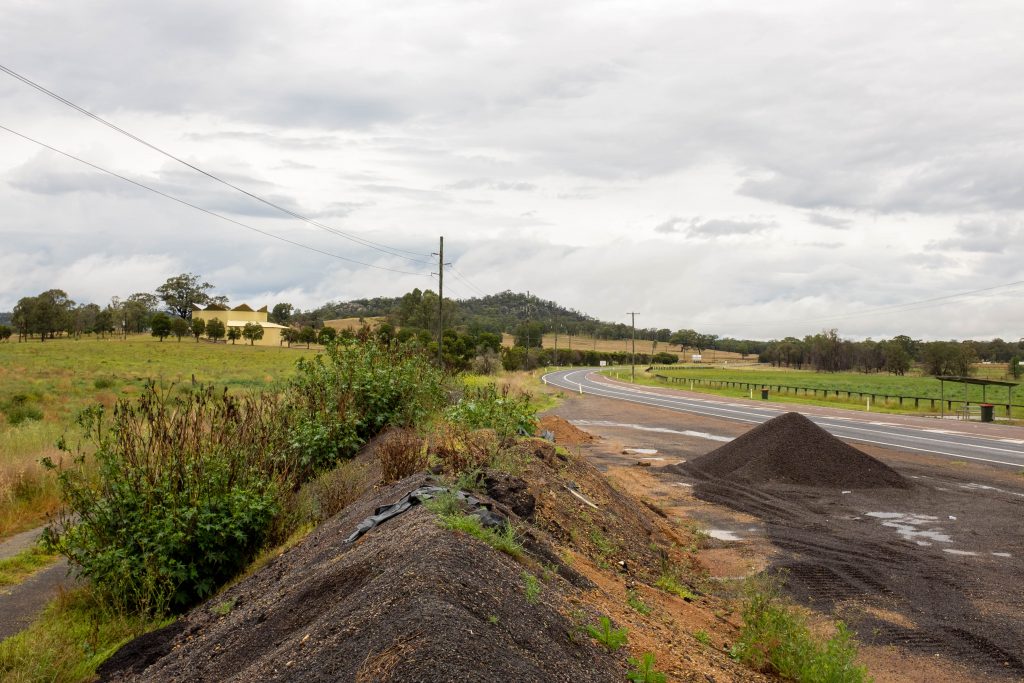 Damp, but ready to ride, we set off towards our intended campsite at Goulburn River National Park. As we neared the turnoff, we met a biker who had been forced to turn back due to flooding. He had suffered a minor crash in the wet conditions and confirmed we would not be able to make the campsite.

In failing light, a new plan was hatched and we made our way to the town of Merriwa. Here we set up our tents in the pouring rain. Not a great experience it must be said. Looking at the forecast, it seems we had timed this trip to coincide with the wettest week of the year. On our first night, damp and sitting under a council shelter waiting for my dehydrated food to cook, I was sorely in need of an attitude adjustment. I counted off reasons to be grateful. 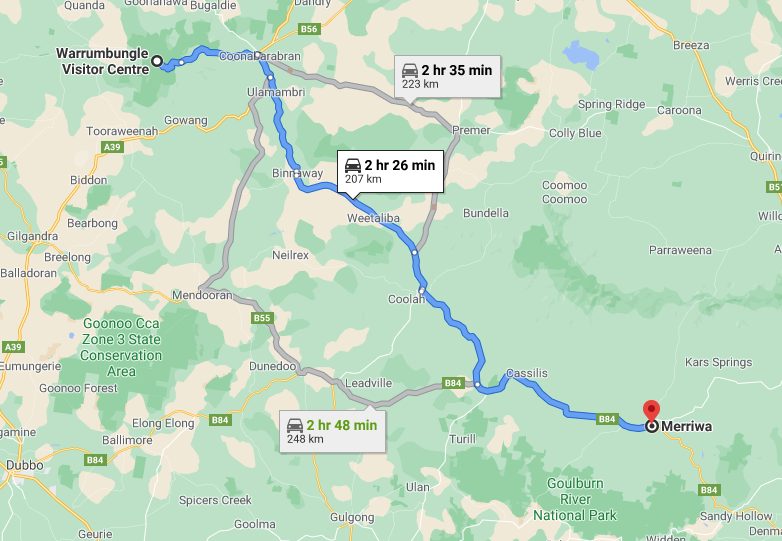 Well rested, it was time to break camp before the rain set in. After breakfast, we pulled on our wet clothes and set off in the rain which was with us most of the way to Coolah. This area featured moody agricultural landscapes, shrouded in mist. Riding in the cool 14-degree weather, there was a brief moment where weak sunshine and dry roads felt like bliss before the torrential rain began again. The bakery at Coolah was the only open store open and it served a tasty pepper beef pie for morning tea. Outside Coonabarabran, the roads dried off a little for a stop at an unusual football oval with a grain silo behind. It made for a striking piece of architecture. 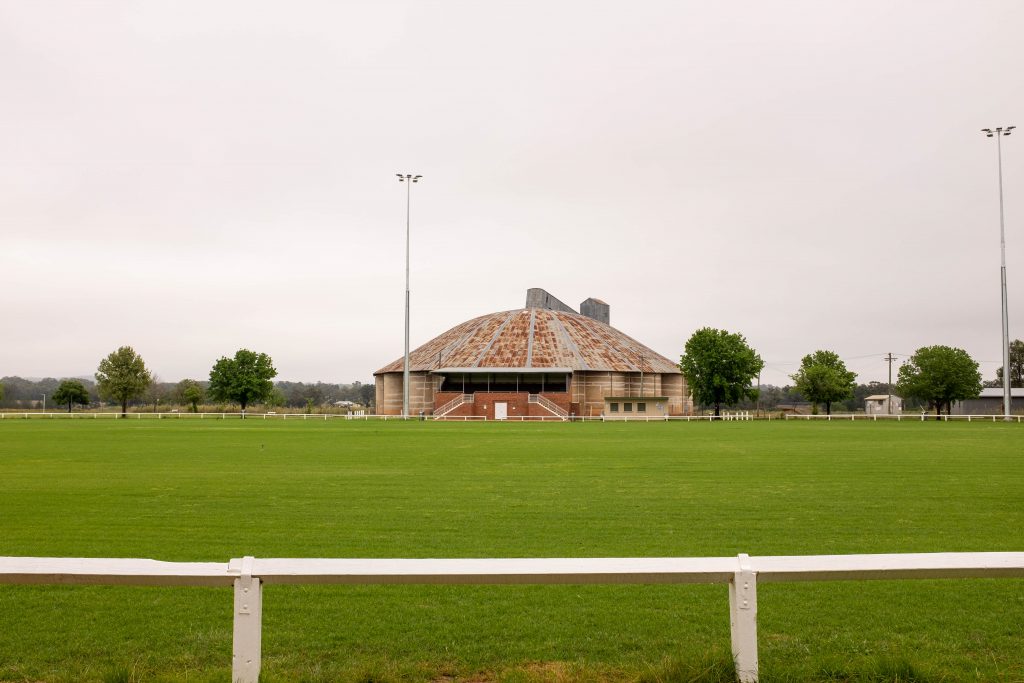 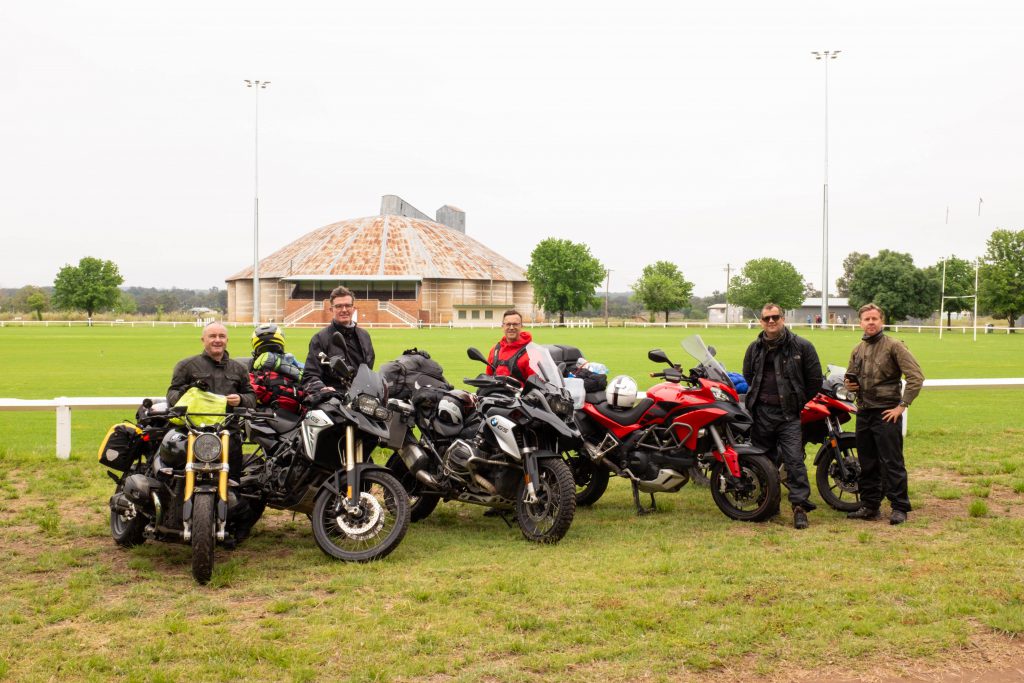 In Coonabarabran, limited food options dictated a burger from one of the cafes before setting off for the Warrumbungle National Park. This was a superb if wet ride. Passing the Observatory, it did not look as though there would be enough visibility that night and the tour was later cancelled. We set up camp at Blackman’s—my favourite campsite of the trip—and set out on a two-hour walk up to Fan’s Horizon. The heavy mist offered limited views although the walk was appreciated after being on a motorcycle for the past two days. The camp itself had kangaroos everywhere and I slept very well. 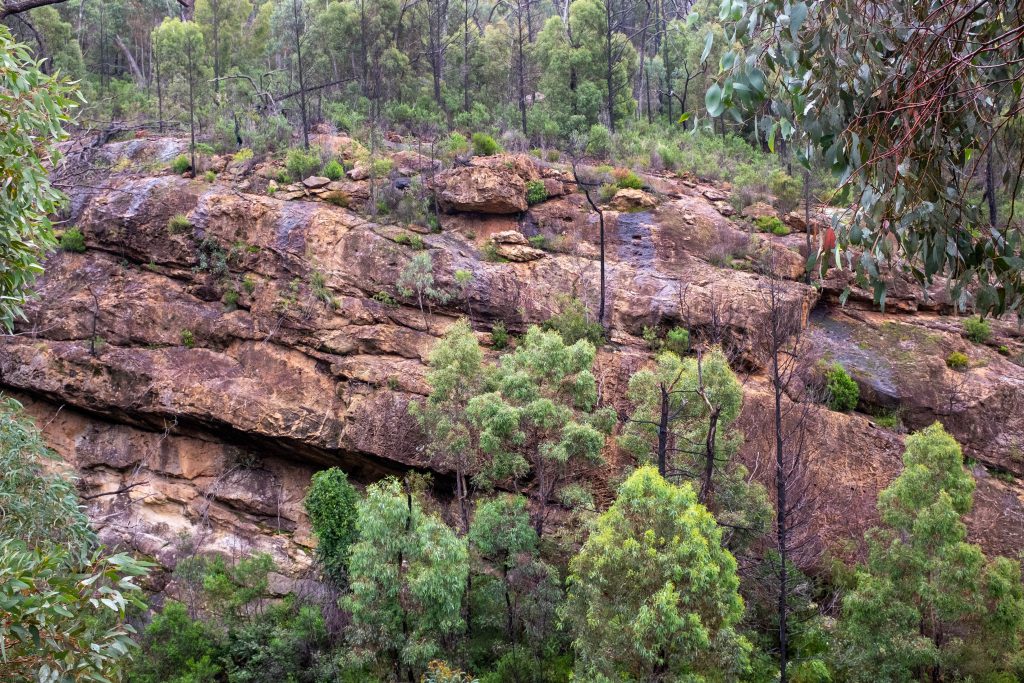 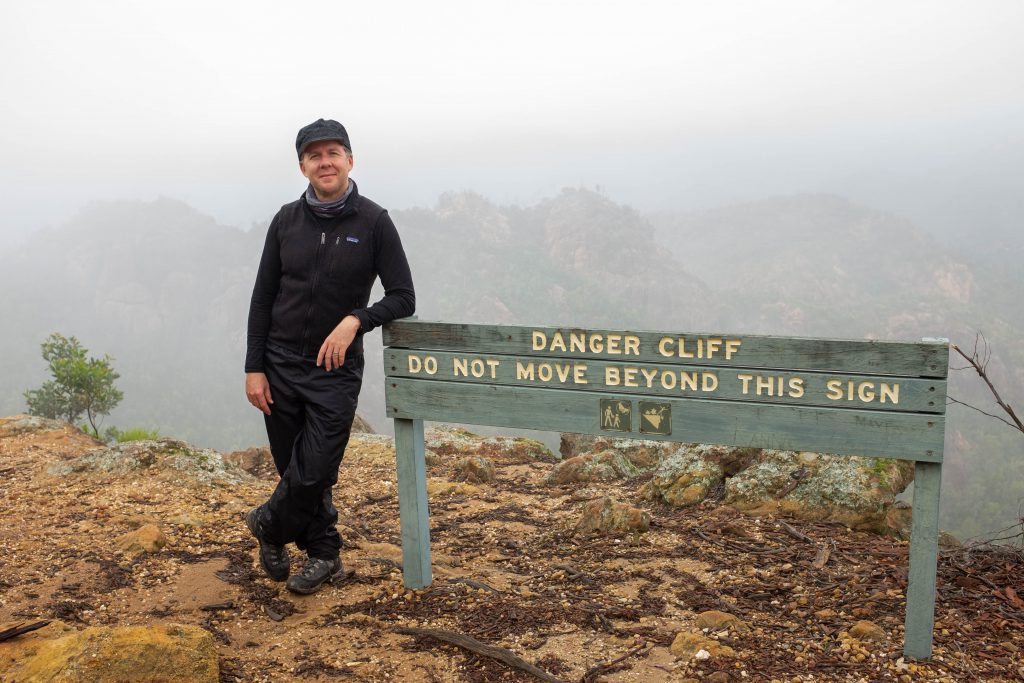 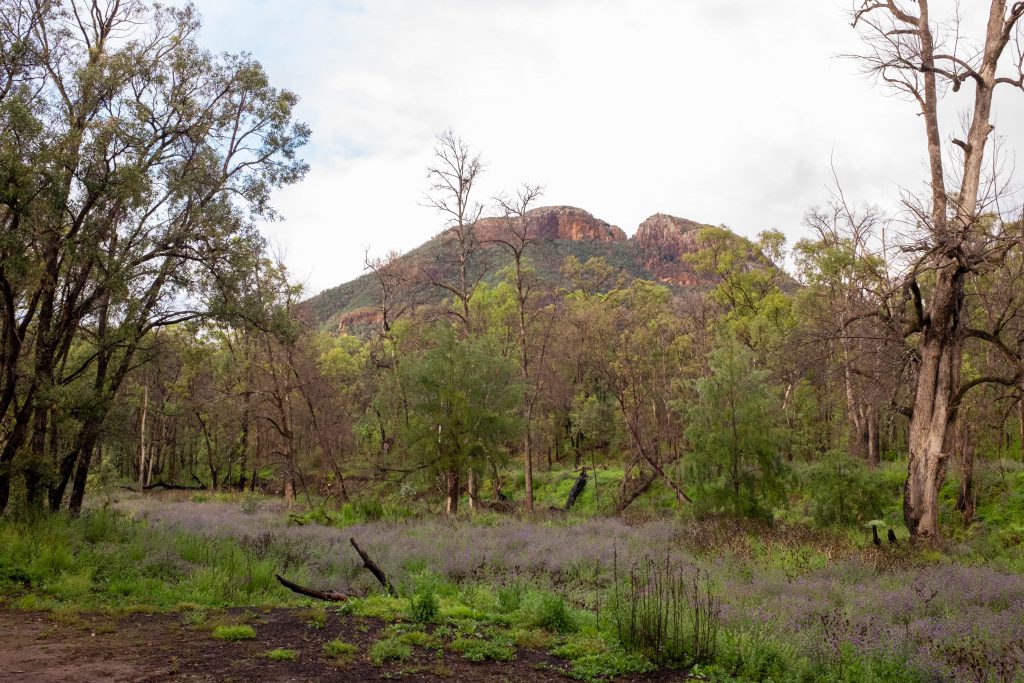 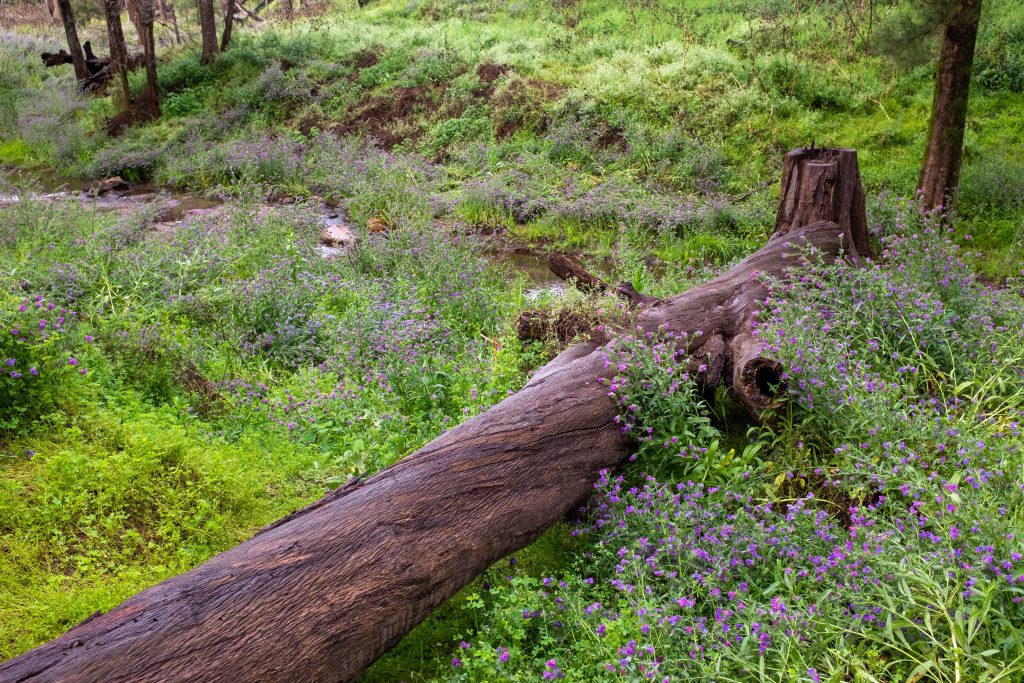 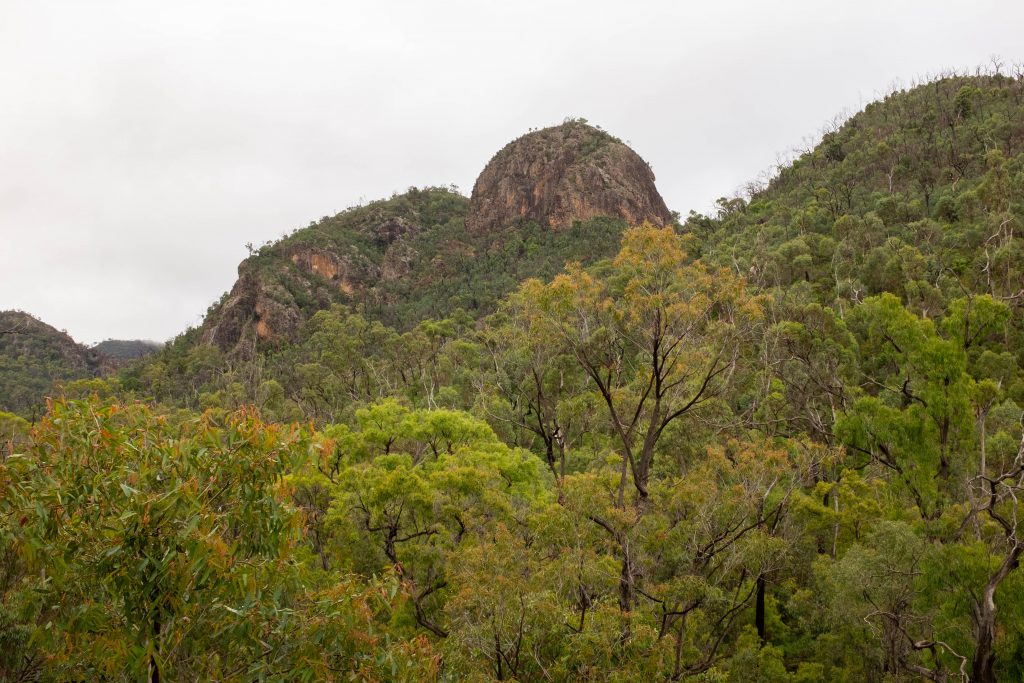 The guys departed for a wet ride back to Sydney while I headed westward into the desert for another six days on the road. Before setting off, I took a gentle walk in the Warrumbungle National Park soaking in the mountains and getting a glimpse of the Breadknife rock formation. Today was the first day with big distances between towns and wide-open landscapes that you struggle to imagine when you live in the city.

Riding the twists and turns of the National Park westward was a great way to start the ride. Ten minutes after exiting the park, the road rapidly turned to dirt and the feeling of adventure set in; along with some trepidation about where the next petrol station was. The dirt road returned to bitumen with the roads flat and straight. Along the road, an Emu ran alongside me—they run surprisingly fast—with a range of beautiful birds (Parrots, Galahs, Sulpha-Crested Cockatoos,) augmenting the wide-open fields. 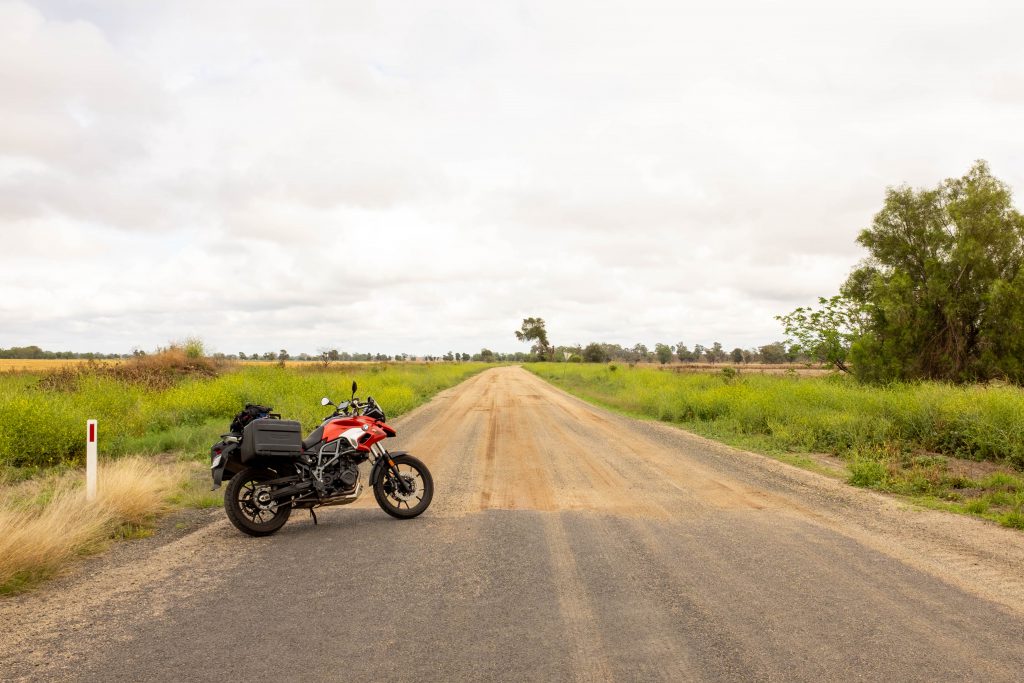 All the while, I tried to keep my concern about my steadily lowering petrol gauge in check, reminding myself it wasn’t a problem until I ran out. Riding into Warren, the sight of a service station was a great relief, arriving with only twenty kilometres left in the tank. This was a wake-up call to the distances between towns and how easily I could have been stuck on the side of the road. I would be more careful going forward.

A late breakfast at the bakery and I was back on the bike. The roads out here are straight and flat with the rare curve breaking the monotony. I found this to be quite relaxing, meditative even. The spaces out here are so big, the landscape so enormous, you can see the curvature of the earth. After all the rain, it was nice to have a mostly dry day with one or two short downpours, but nothing like the two previous days. 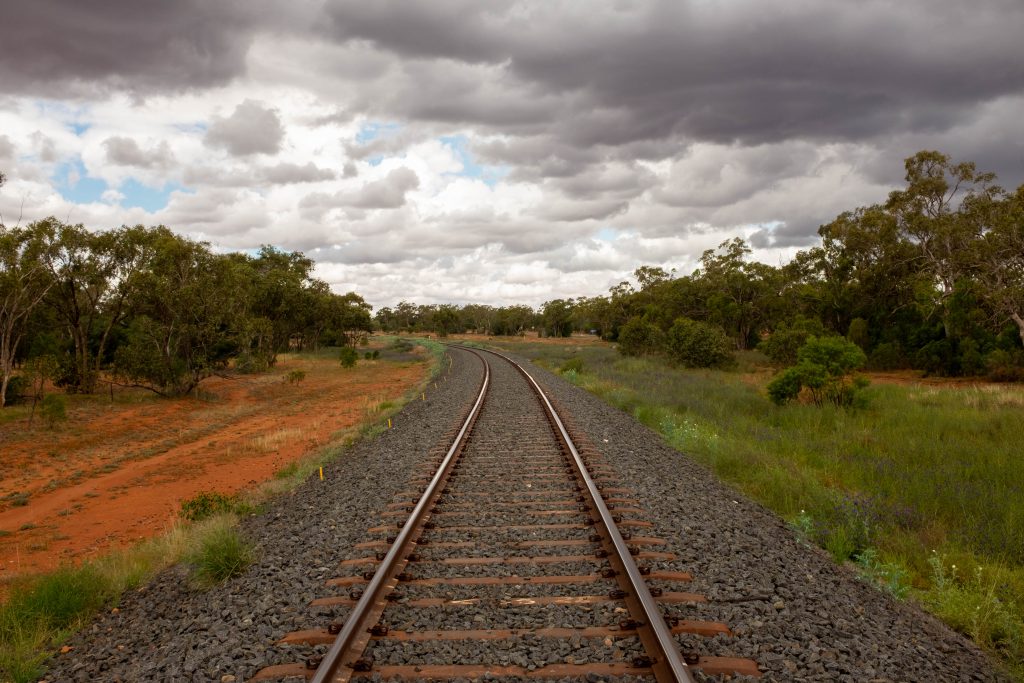 Arriving in Cobar and it is clearly a mining town where even the tourist attractions are mining related. The campsite is friendly, warm and blissfully dry, allowing me to air my wet boots. I visited the lookout at the mine before having dinner at the local Thai restaurant. 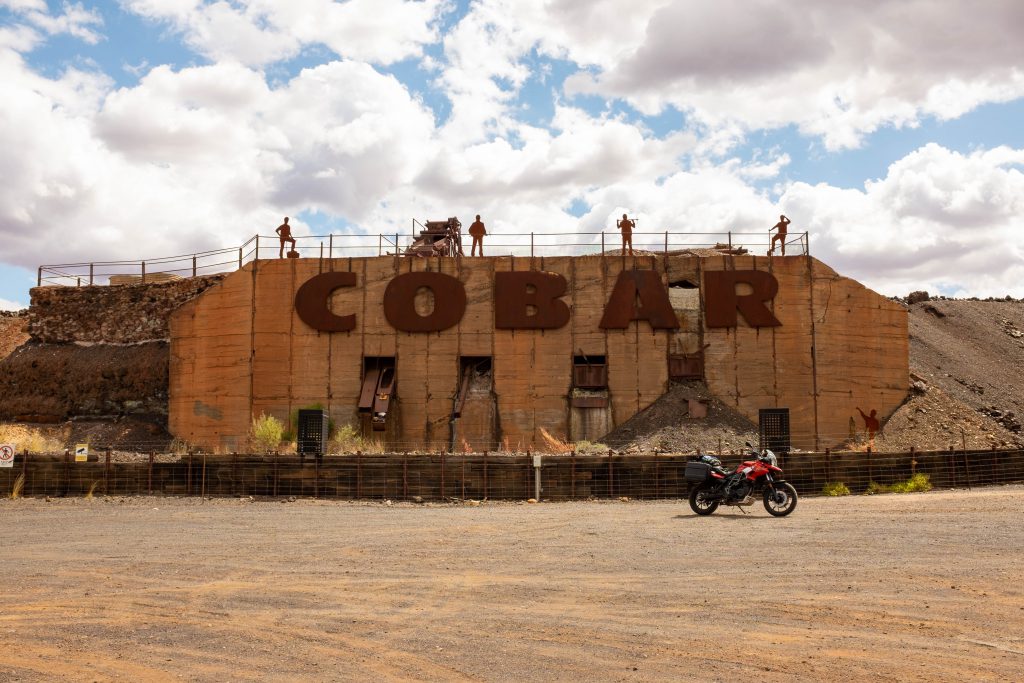 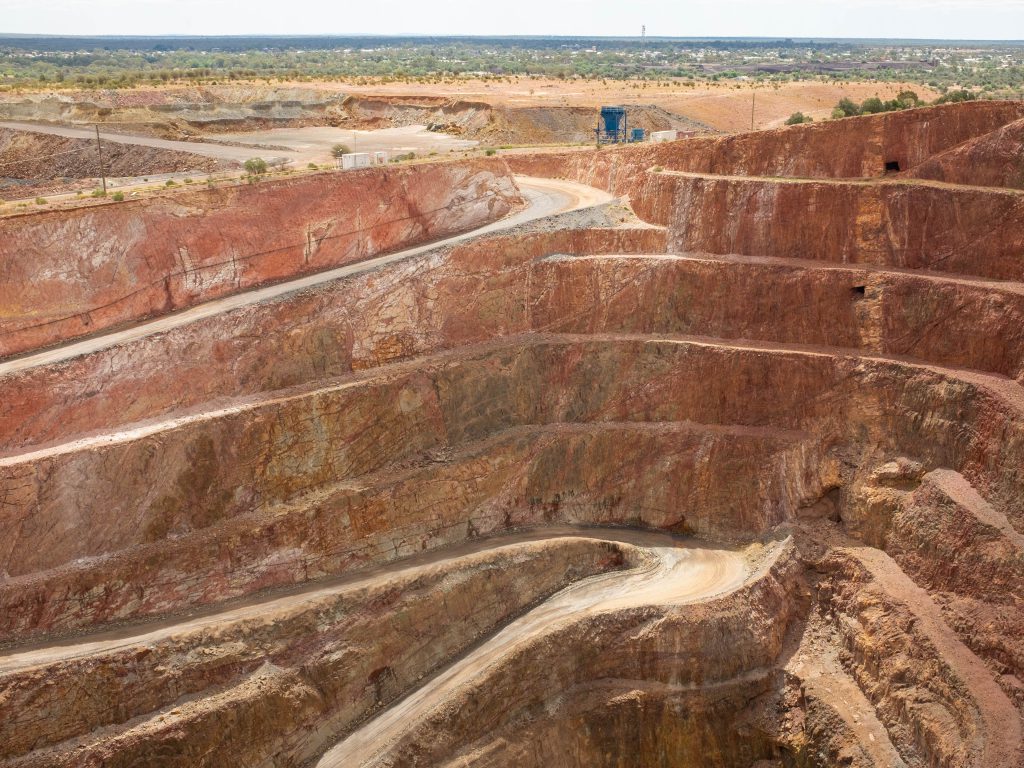 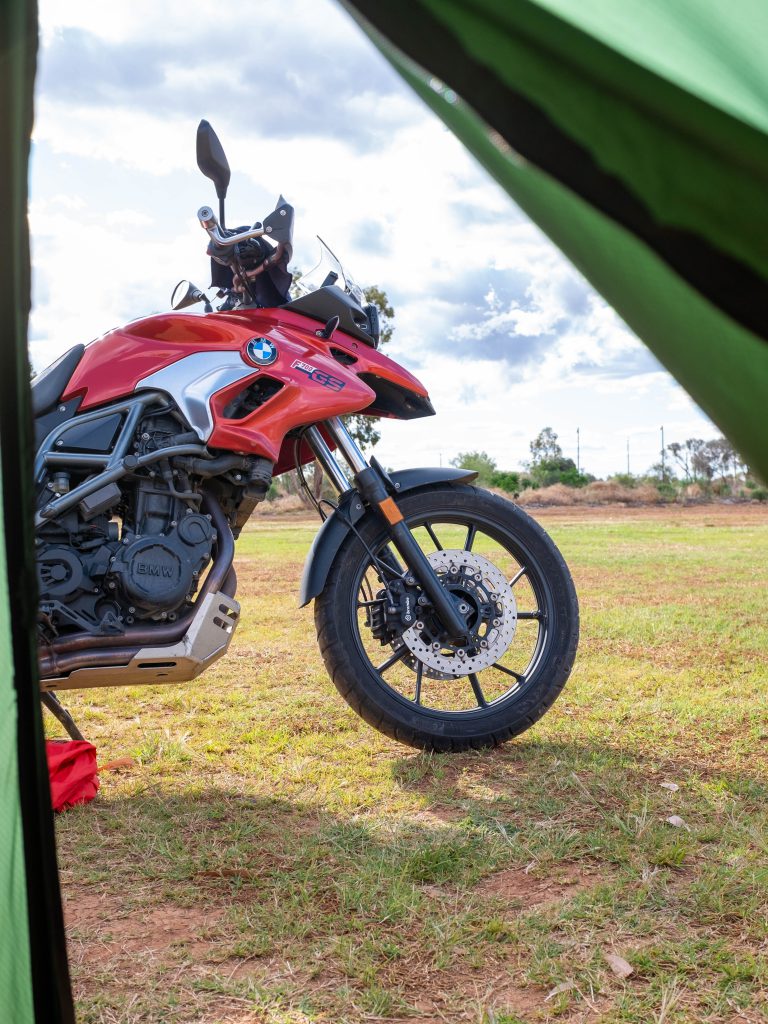 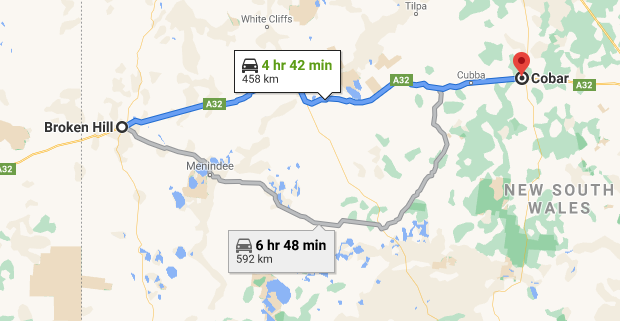 After a bad nights’ sleep in the caravan park—they have an all-night street light that lit up my tent like a lantern—I headed out to the lookout point to watch the sunrise. Spending so much time outdoors, I found myself getting in sync with nature; rising with the dawn and going to sleep early. This highlighted how much we live out of sync with nature in the city. The sunrise was beautiful with the red soil reflected on the clouds above and the whole scene turning gold.

After breakfast, I was keen to ride and headed off early. Keeping a keen eye out for wandering wildlife, I spotted Goats, Swallows, Parrots, and even a Dingo. The ride was mostly flat and straight with huge horizons. There is a meditative quality to this kind of riding with your thoughts drifting from the enjoyment of the present to new adventures to plan; possibly a slow surfing camping trip on my thoroughly impractical Deus ex Machina TW200, and perhaps a sidecar ride through Asia photographing stylish motorcycle riders for my second Style Rider Motorcycles book. 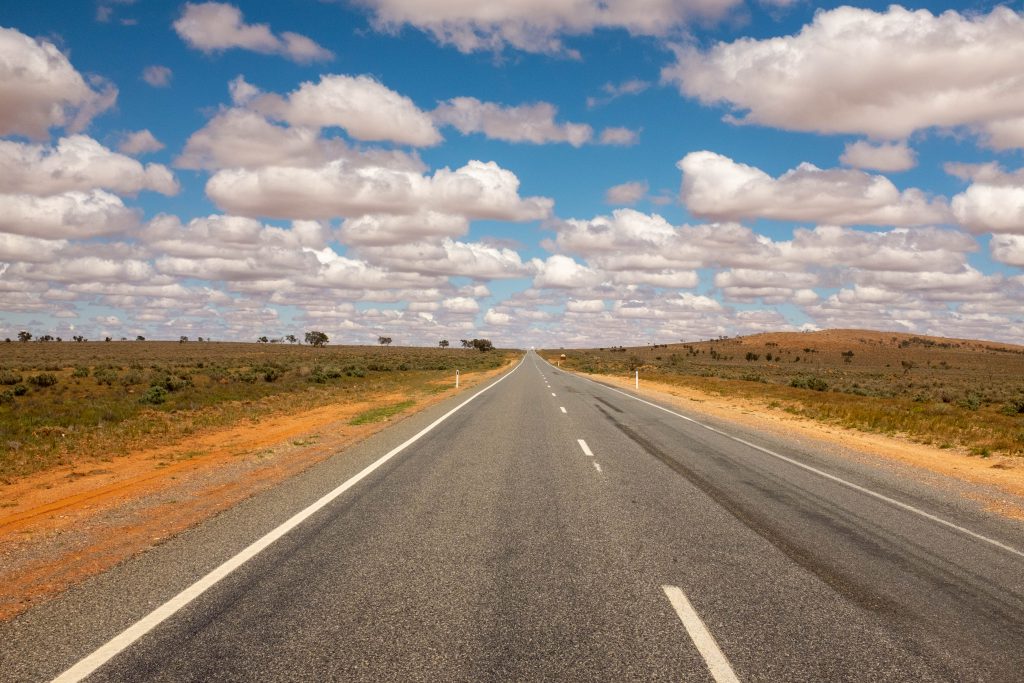 This kind of riding is hard on the body as you’re at high speeds and buffeted by the wind. Combined with the need for concentration, it can be tiring. Riding towards Broken Hill I was surprised by the hills, twisting and turning, offering a different riding experience after 800 kilometres of flat straight roads.

Rolling into Broken Hill, I stopped to take photos of the old mine. The rusting buildings are dramatic against the earth and big skies. Lunch at Alfresco’s Cafe was quite good in spite of the brusque waitstaff. After a well-deserved nap, it was off for dinner at the Palace Hotel; otherwise known as the Priscilla Queen of the Desert Hotel. The murals, excellent service and delicious steak was quite a treat after a couple of days camping.

Read more about our experience in Broken Hill and the return leg of the road trip in the next instalment. 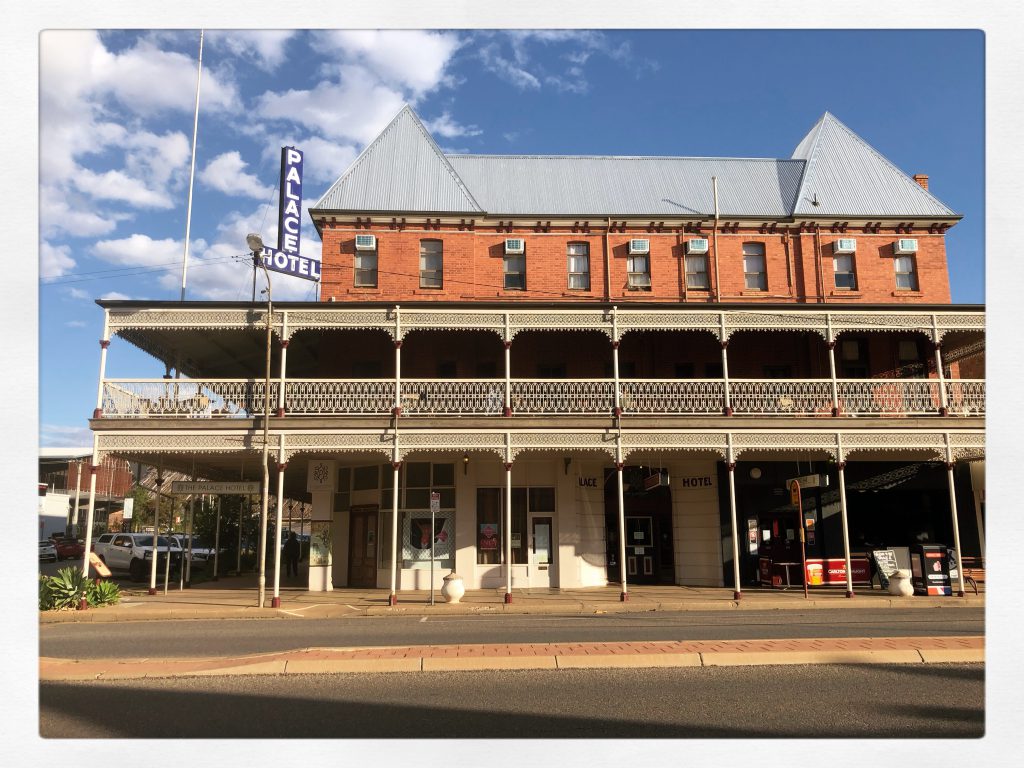