Style Rider aims to document the world’s most stylish motorcycle riders, be they riders of classic, custom or cafe racer steeds. Focused on the intersection of motorcycle culture with individual style, here we speak to Paul d’Orléans, aka The Vintagent about being creative and riding vintage motorcycles across America.

Name: Paul d’Orléans, aka The Vintagent

Residence: I get mail in San Francisco and New York, but have been hunkered down in a tiny town called Las Animas in Baja California Sur for four months now, and might stay.

Occupation: You’re as bad as my family. I don’t have one. Ten years ago I cut my ties to my former occupation as a decorative paint specialist and moved to Paris to write full time. Romantic, no? The real commitment was to pursue my creative ambitions without compromise, so I limited my wardrobe to a uniform of khakis, white shirts, boots, and a neckerchief, and set to. Now I can justifiably be called a writer, filmmaker, wet plate photographer, publisher, painter, curator, and historian.

Today’s ride: Not knowing the shit was about to hit the fan, I transported a 1964 Honda CL72 Scrambler to Baja, because it was the first model of bike ever ridden from Tijuana to La Paz, back in ’62. It seemed a resonant choice with acceptable performance, and that has proved correct.

Describe your style: Not wearing what you are wearing.

Favourite items: The 1960s Omega Constellation I took off my father’s wrist before he died. The White Tara thangka given to my grandmother by the Dalai Lama in 1959. My collection of novels-in-woodcut from the 1920s and ’30s: Lynd Ward, Frans Masereel, Otto Nückel, et al. The Russian prison tattoo suit I commissioned from Dirty Needle Embroidery. My 1965 Velocette Thruxton. 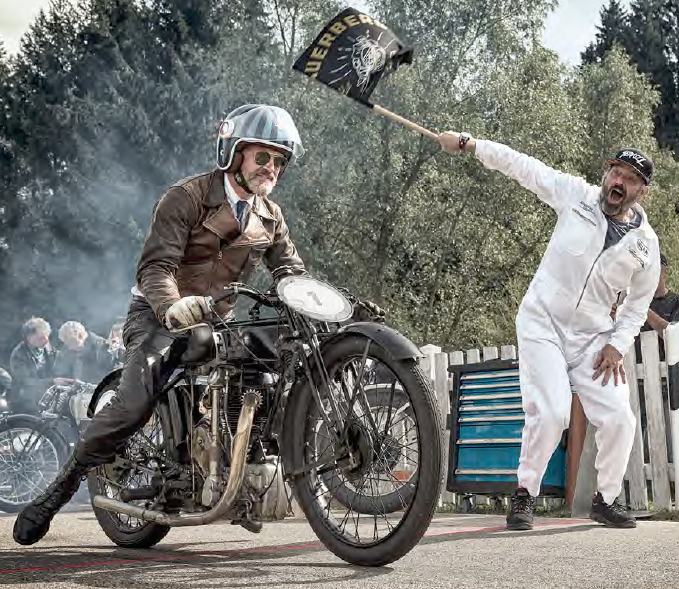 Next purchase: Some decent paints and archival paper: the stuff available in Baja is crap.

Style icon/inspiration: I was regularly queer-baited and beaten up for dressing like Bowie in the ’70s. I started dressing like Paul Simonon in the ’80s, and was still harassed. Then I started riding vintage motorcycles and dressing like a Rocker, and nobody messed with me. Now I freak the squares at corporate events, wearing stuff like vintage Gianni Versace suits hand-painted with guns, knives, and hand grenades.  As I’ve never seen anyone dress like that, I guess I’ve outgrown style icons. I love the work of a few eccentric designers like Walter van Bierendonck, and confuse my heritage and denim buddies by showing up at bike events in Issey Miyake jumpsuits, or whatever floats my dinghy. I was accidentally cool in 2010.

Best local ride: Baja: the only nearby way to cross the Sierra de la Laguna mountains separating the Sea of Cortez with the Pacific Ocean is an awesome dirt and sand road from the East Cape to Todo Santos, which has fast straight stretches and twisty, technical mountain sections, with lots of water crossings and amazing views of two seas. San Francisco: cross the Golden Gate Bridge, climb Mt Tamalpais, take the Bolinas Ridge road along the spine dividing Bolinas Lagoon and north Marin county, then blast up Highway 1 for oysters and champagne on Tomales Bay. Return via any of a dozen quiet country roads, or drink too much and bunk at Sir and Star with my sweetie.

Best distance ride: I’ve ridden a one-week, 1000-mile vintage ride with the Velocette Club every summer for 30 years, held anywhere between LA and Alberta, Canada: what an excellent way to discover every decent motorcycle road in the Western states. More recently I’ve ridden across the USA three times on 1920s motorcycles with the Motorcycle Cannonball: that’s 3600 miles in 17 days, which sounds doable until you do it. The only suitable description is epic.

Tip for stylish motorcycle riding: Wear what you like that offers protection – you already know what looks good on you. If you put something on and feel uncomfortable, it shows. And if you are an ass, nice gear won’t help.

Next motorcycle trip: Todos Santos and back by dirt: definitely against the law at the moment of writing this, but a familiar circumstance for a former ton-up boy.

If you are interested in contributing to Style Rider, get in touch at dennis@thebetterlivingindex.com.

Style Rider book to be published in late 2020: To register for pre-orders, email dennis@thebetterlivingindex.com, and we will notify you of pricing as the book approaches publication.