The adventure in the mountains of Vietnam continues with breathtaking vistas, smoke haze and more repairs. Starting in Hanoi (see part one here), we drove north to Ha Giang to spend seven days on old motorcycles in the mountains; the first three days can be seen here.

Waking the next morning, the previous nights’ storm—serious enough to take out power to the entire region—had passed, leaving a crisp, clear morning with just the right amount of mountain mist to make it interesting. I slept well that night, waking early to write and think before going for a walk in the rice fields. As the sun rose, the green rice stalks were bright with colour providing a magnificent backdrop to us riding through the fields. At the homestay, we ate a delicious breakfast of pineapple, mango and banana pancakes before we set off; albeit briefly. Ten minutes down the road and the chain came off one of the motorcycles necessitating what would be the first of many repairs over the coming days. 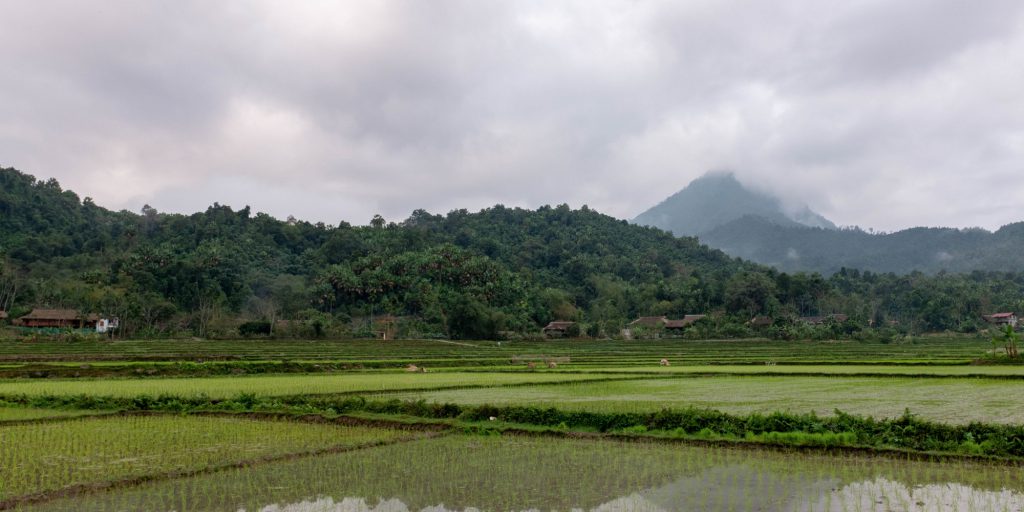 Later, on the way into the mountains, it became clear that the storm was significantly fiercer here, with fallen trees taking down power lines and a fallen advertising billboard lying across the road. These kinds of hazards have now become the norm on the roads of Vietnam. On a motorcycle, they do not present too much of an issue as you wind your way across the road avoiding potholes, trucks and water buffaloes. The next hour featured winding mountain roads with magnificent vistas. This continued for a couple of hours as we climbed higher into the mountains. 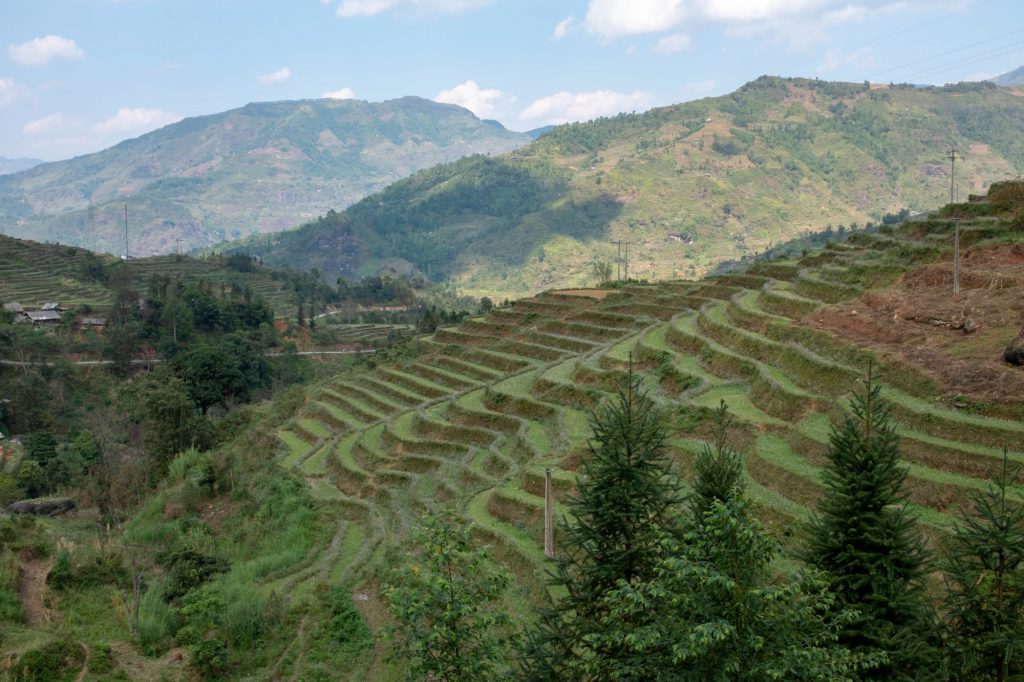 Side note: riding in Vietnam comprises numerous near misses with trucks, water buffaloes and chickens. I wrote this last part as I travelled, and it was how I felt at the time. However, after a week on the motorcycle, these obstacles are just part of the adventure in Vietnam. I noted a change in my attitude on day five when I was skidding sideways across the road onto the gravel shoulder to avoid a bus. By this time, there was no panic. In fact, it was not even notable other than how much my attitude contrasted with my earlier writings. 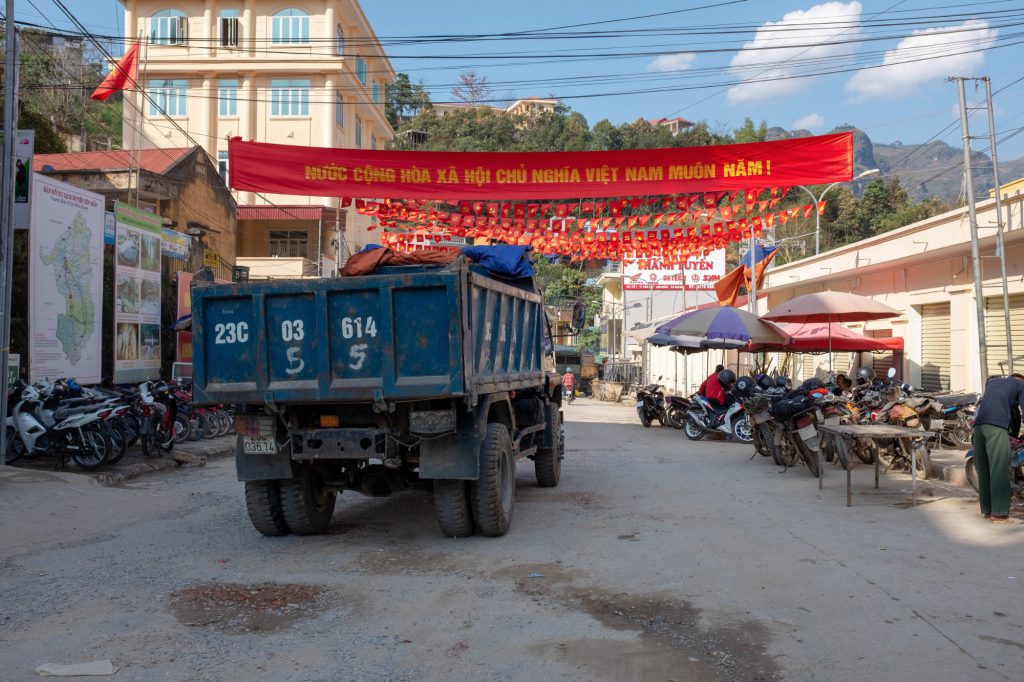 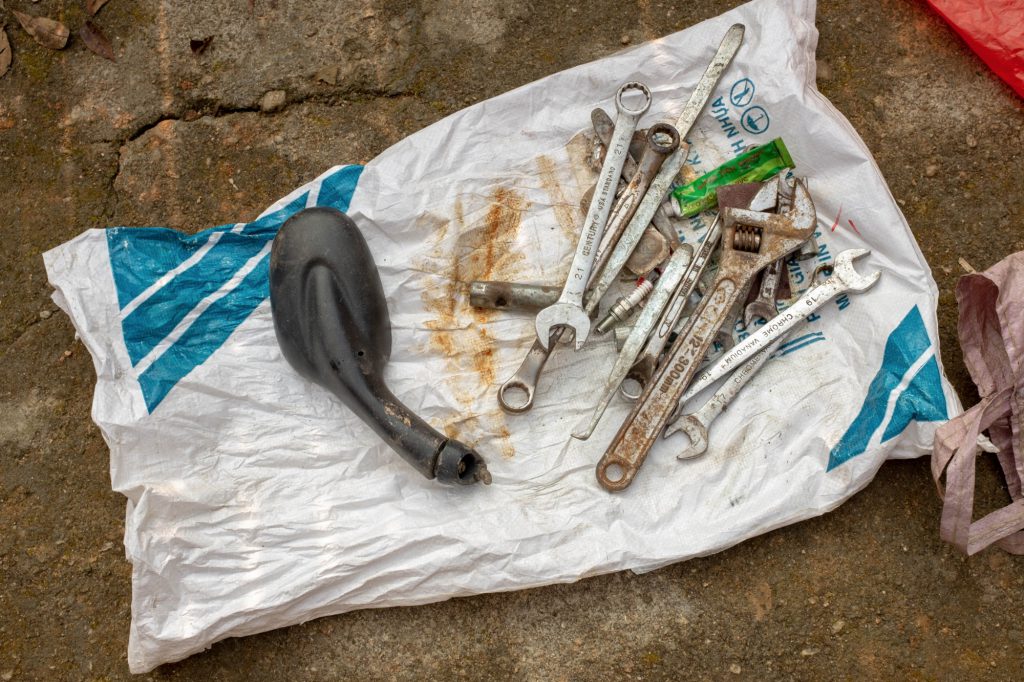 Stopping for coffee in the early afternoon, the next two hours was pure riding bliss with seemingly endless perfect mountain bends. Later we stopped for repairs in a relatively large mountain town where trucks roared through the main street, warning pedestrians to get out of their way with a blast from their horns. As the afternoon wore on, we raced up the mountainside on what would be considered a footpath in many countries, with our guide appearing to race three teenager girls on a scooter who incidentally were all talking on their phones while they rode. Passing a small village, we then made the final ascent; four kilometres along a narrow muddy road with a 19-degree incline to the homestay. Arriving safely, there were some relieved faces when we parked the bikes for the night.

Waking at 5.30 am, the morning was cold as I lay under the covers looking up through the gaps in the ceiling and walls. At 6.30 am the sun rose over the mountains, bathing the valley in muted light. There was some anxiety around the group about the four kilometres of steep descent and the muddy road ahead with the crew pondering this silently whilst they drank their coffee. However, like many things in life, it was not as bad as we feared. The road down went without incident, starting the day off with an interesting challenge.

The following four hours to lunch were absolutely superb. Up and down various mountains punctuated by photo stops, cigarette breaks—our guide smoked a lot—and mechanical breakdowns. Nevertheless, I was beginning to love the feel of the 125cc Honda Repsol replica I switched to a few days ago. It handles well in the winding roads and adequately on the dirt. I arrived at lunch exhilarated from the mornings riding.

After lunch, the bikes went in for more repairs, before we headed up into the mountains again. This time there were a lot of trucks and buses coming the other way. If ever you’ve been on a narrow mountain road with a truck taking up three-quarters of the road, you will know what it feels like. Now multiply that by fifty buses and trucks. Vietnam really is an interesting place on a motorcycle. I made a mental note to be more careful with the trucks on the mountain bends as there was one very near miss in one of the corners. 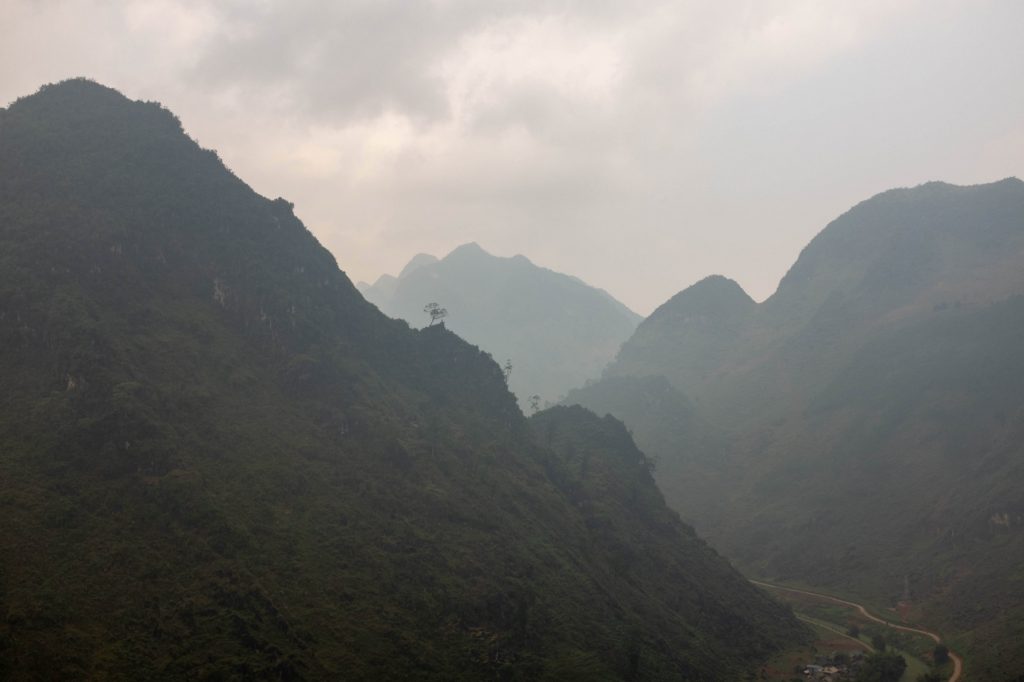 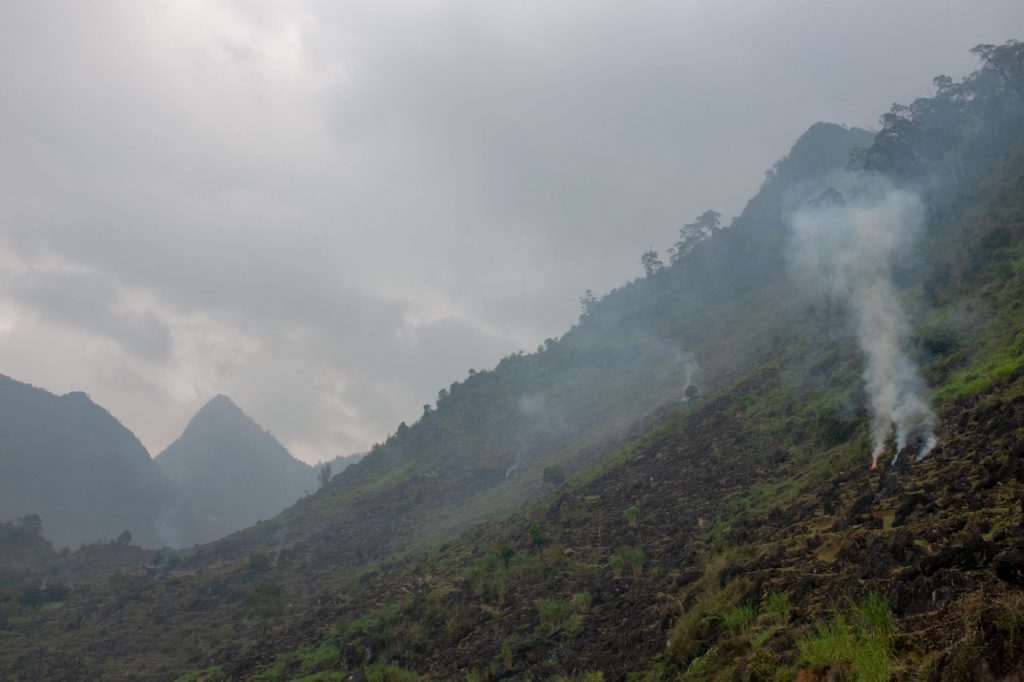 Pollution: this was an ongoing issue. In the city, it is the fumes from the traffic. In the country, it is the fires from cooking and burning off. It is one of the only things that put a dent in my enthusiasm for Vietnam. I took to wearing a bandana across my face while riding and was still waking with what can only be described as a smokers cough. 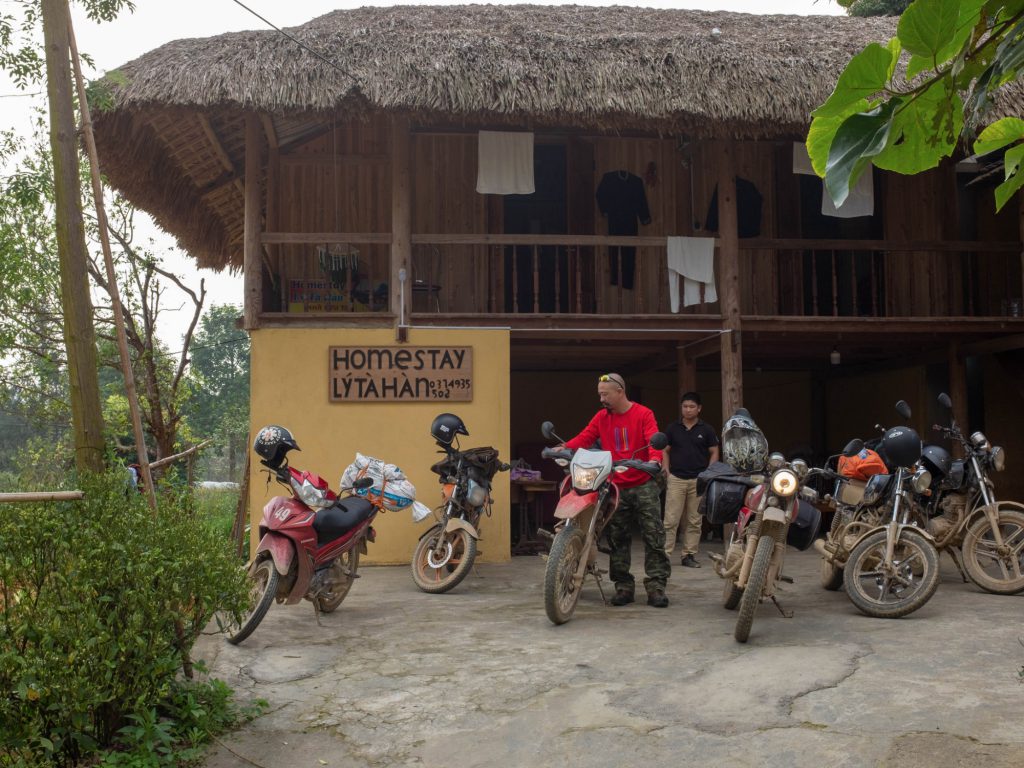 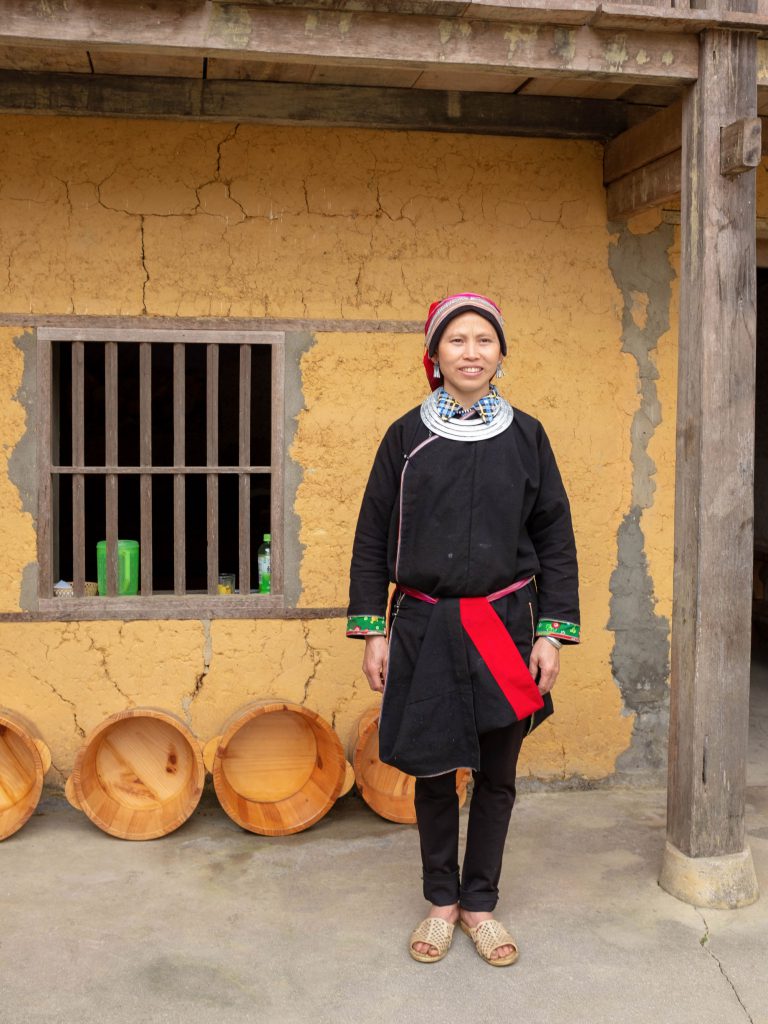 Dinner at the homestay was an absolute delight. Great cooking, hospitable people and plenty of corn spirits to lubricate proceedings. The next morning we had a late start with many of the crew feeling the effects of the previous nights drinking; turns out large quantities of corn spirit mixed with rice spirit and beer gives you a bad hangover. We set off down the mountain at a leisurely pace allowing the crew to ride safely and deal with their hangovers. Uncharitably, I thought of this period as the geriatric motorcycle tour of Vietnam. In the valley the smoke haze was shrouding the landscape, leaving only the raw forms of the mountains visible.

After a coffee break we picked up the pace and we rode further into the mountains, once again close to the border with China. The terrain here is reminiscent of Switzerland, only instead of clear skies, we have the smoke haze obscuring the mountains. The winding roads and terrain were absolutely superb—a dream if you are a motorcycle rider. 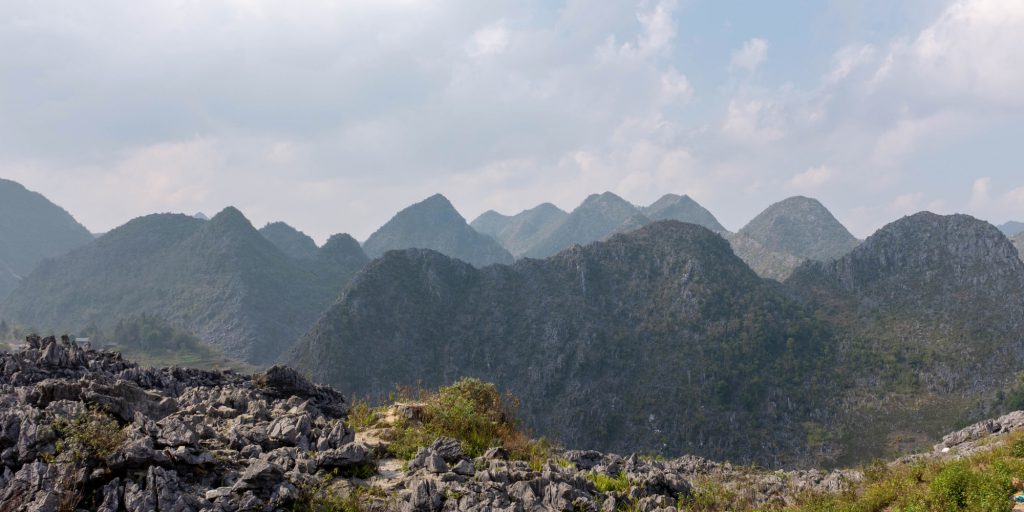 The days ride had many twists and turns, motorcycle repairs and an off-road section that brought us to a district of trees that were over one thousand years old. Like the mountains, ancient trees put your place on this earth into perspective. We are here for such a short time in the scheme of things. On the way back, we stopped to take in the mountains in the late afternoon light. While stationary, there was a detonation directly below us on the mountain. This gives one pause as you can see the smoke rising from the hole below. We did not hang around.

Riding the next hour to a new homestay, we were aghast to find that it was literally located in the middle of a stone quarry. What a dump! Why we were here we felt had more to do with improving the guides’ profit margin than our enjoyment. It was unimpressive with the crew retiring at 6.30 pm to read and watch Netflix. This was the only questionable part of what was an excellent experience with our guide Johnny Nam Tran.

The next morning I woke refreshed and went out walking in the area. The smoke haze was greatly reduced much to the pleasure of my lungs. The crew and I were keen to get out of the quarry as the next accommodation was back at an earlier homestay with great food and hospitality. Along the way, we stopped for coffees at a French colonial area only two miles down the road. There were so many young westerners in this area riding scooters and small motorcycles, something we had not seen in previous parts of the ride. Young people remind you that you do not need all the gear to set off on an adventure. You just go with what you have. Something to keep in mind.

The roads through the mountains this day were once again sensational. There was no rain to make the roads slippery and a lot less smoke haze than the previous day. At any other time, I’d be raving about the winding mountain roads, spectacular vistas and friendly people. However, after days of riding in this wondrous place, there is little left to say that I have not already said so I will leave the images to do the talking. 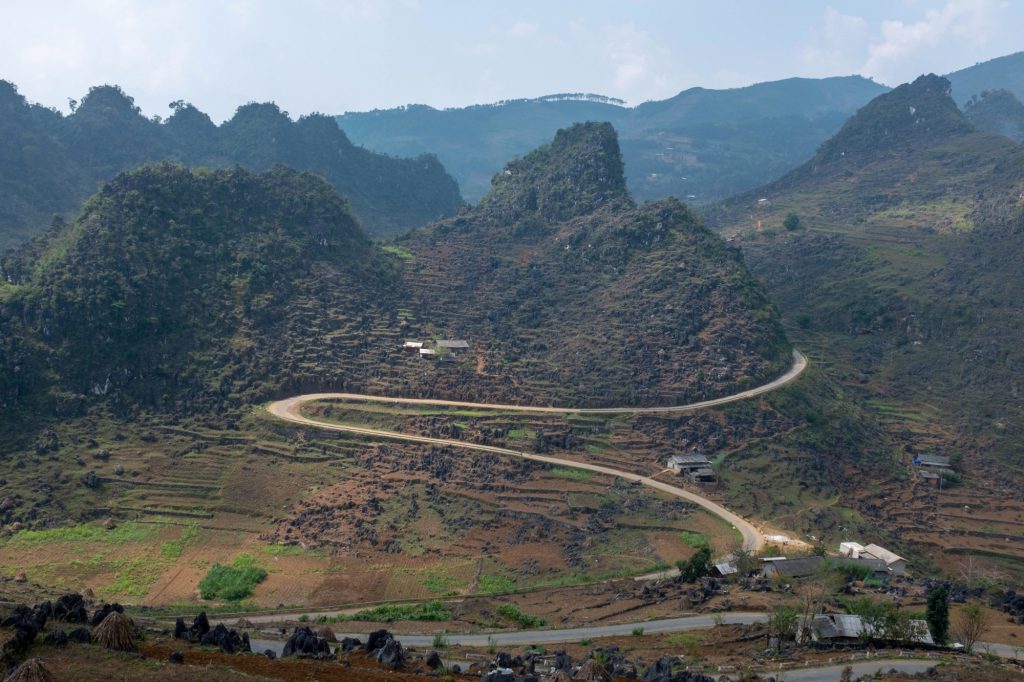