And so the adventure begins. After nearly a year of planning, we are heading north to Ha Giang—pronounced ‘Hazan’—to spend seven days on old motorcycles in the mountains near the Chinese border. At 8 am, the driver arrived to transport us from Hanoi (see part one here) to the northernmost mountains of Vietnam. The first hour in the bus featured a rather bleak landscape as the city’s industrial suburbs and pollution meet the subsistence farming communities. Punctuated with a quick stop in the town below for lunch, we arrived six hours later at the foot of the mountains, 10km from the Chinese border. 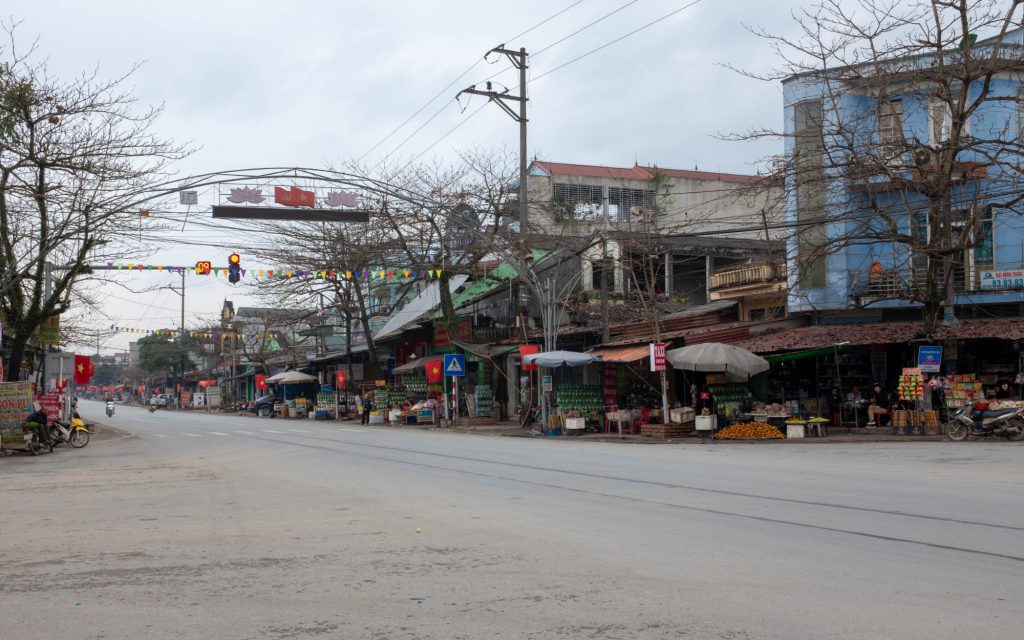 Our first two nights were in a homestay situated in an agricultural village, with workers toiling in the rice fields set against the up tilt of the surrounding mountains. It was very peaceful as we walked around the rice fields, taking in farming life in Vietnam. I do not feel the romanticism towards farming life that some city people feel, knowing that I would not be suited to the hardships these people experience day to day. The homestay afforded views over the rice fields, with comfortable bedding, good food and mosquito nets. 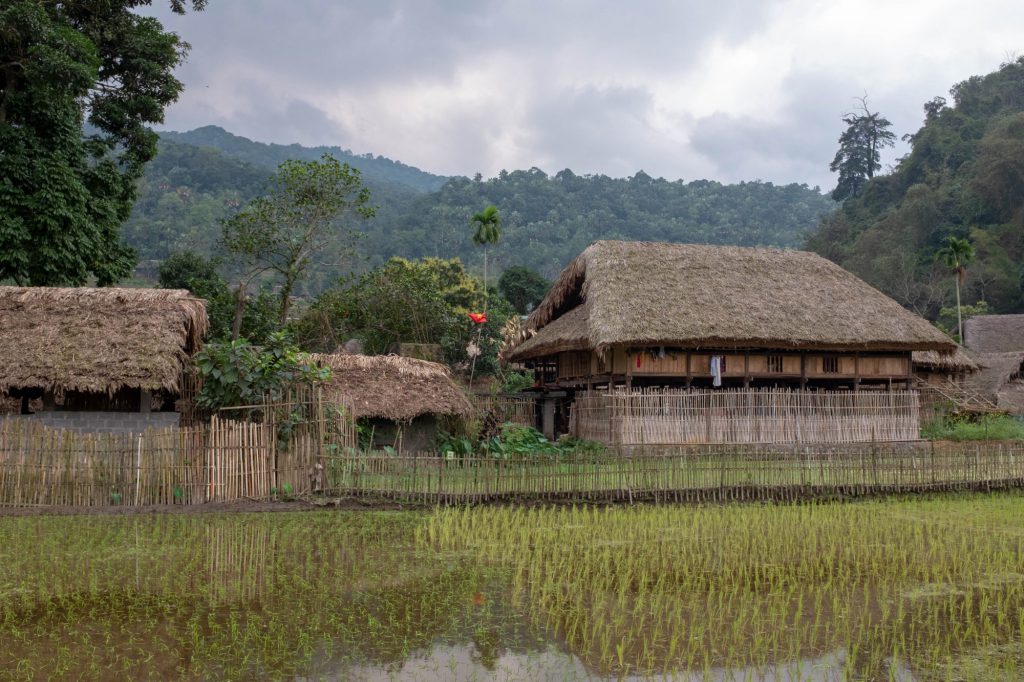 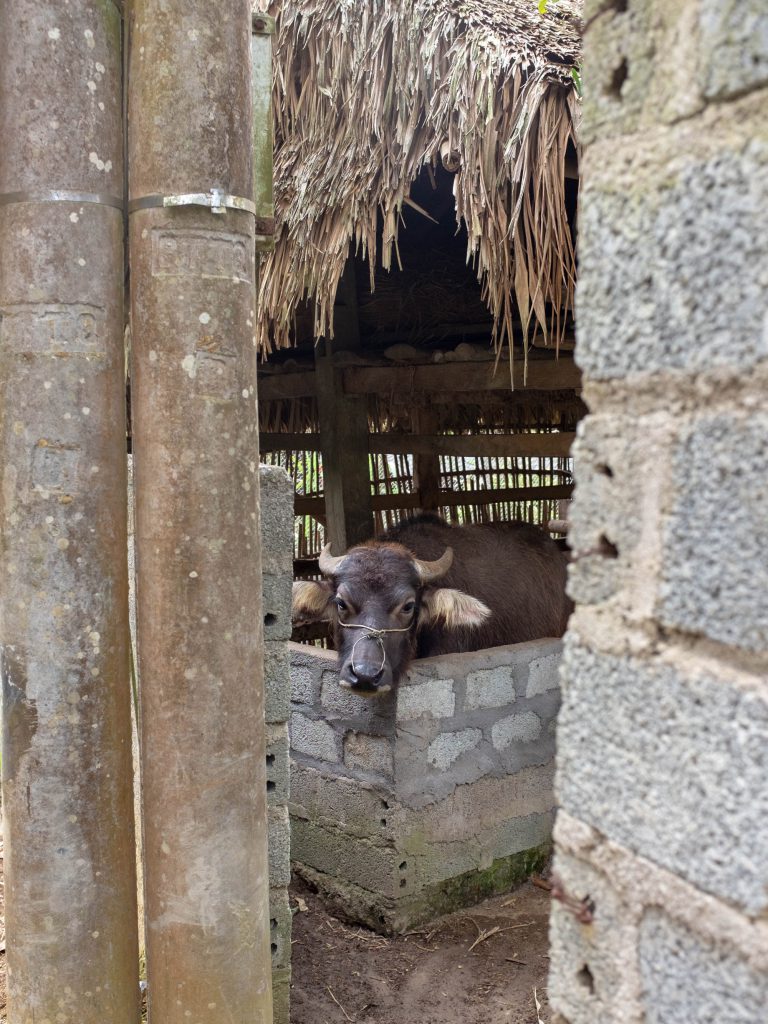 That night, we were taken to a birthday party on a restaurant boat called the Nha Hang Ca Song La. I was warned that a lot of drinking was expected in these gatherings—I do not drink alcohol at all—, meaning I had to stay firm, but polite throughout this first evening. The birthday party was for our host Johnny Nam Tran’s wife and daughter where we ate a delicious hot pot with the best tofu I have ever tasted.

Part way through dinner I was asked to take a bunch of flowers to what I presumed was to be the birthday girls a the next table. It was not. The local beauty had taken a shine to me, and I was to hand them to her; much to the amusement of our group. While slightly embarrassing, this is just one of the cultural things to be navigated when travelling. Later in the evening after the crew had consumed at least fifteen rounds of the local rice spirit, we visited a karaoke bar. This was great fun. Our host and his team were good singers, belting out Vietnamese pop songs. While one of our group sang beautifully, I offered more enthusiasm than talent, butchering various pop songs in the name of entertainment. 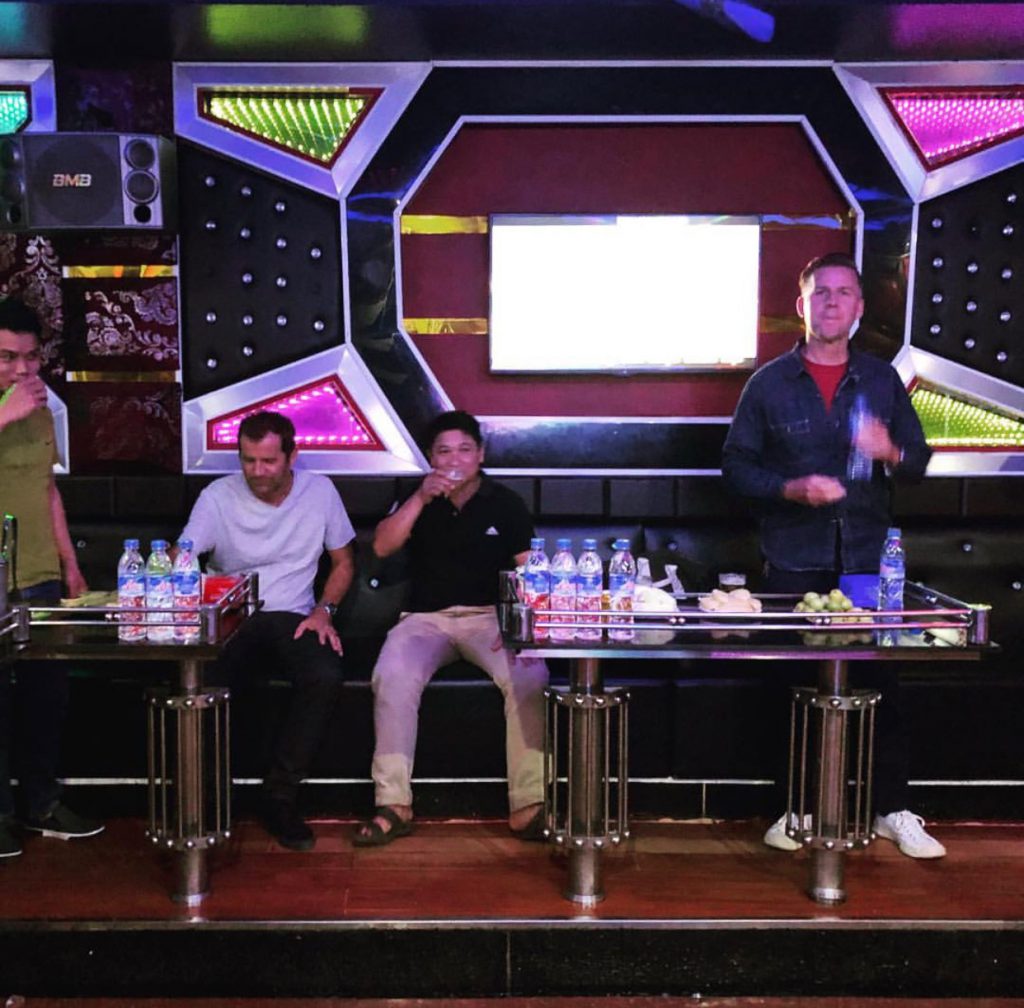 Going to sleep that night under a well-designed mosquito net—more like a small room—above the rice paddies, I’m reminded once again how noisy nature can be. The frogs croaked all night until the roosters took over, followed by the dogs barking. Add in snoring, and you have a cacophony of sounds that required earplugs. Still, it was a peaceful place to go to sleep.

After breakfasting on delicious beef noodle soup in town, we picked up our motorcycles and joined the traffic on route to the mountains. It felt great to be on the bike after a day on the plane and another on a bus. Familiarising myself with the road rules where the use of the horn is an essential communication tool and the unwritten law that the bigger vehicles have the right of way, I quickly felt at home on the bike; initially a Honda XR150.

Johnny (our guide with the barcode tattoo below) led us to the local version of a freeway for a short ride in the light rain before we turned off and headed up into the mountains. Almost immediately the road turned to mud as we began to climb steeply. I had not been expecting this type of off-road riding. The roads progressively became narrower until they were nothing more than a hiking trail; dirt paths, steep in places with shallow river crossings. This first stretch was way out of my comfort zone with all my concentration going on staying upright as the bike wriggled around in the dirt. 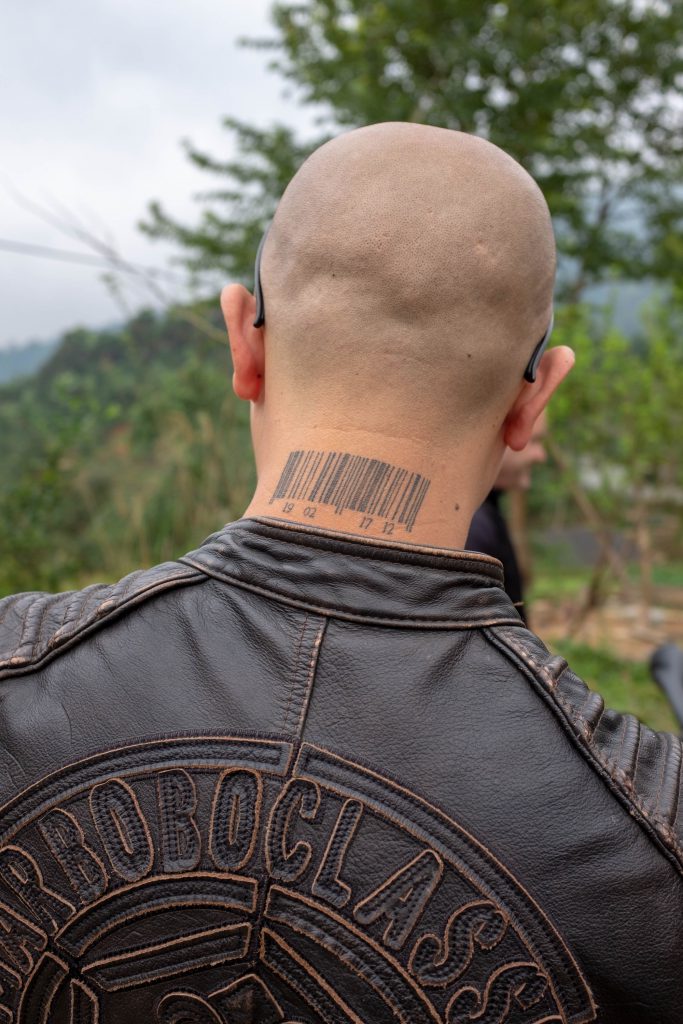 As this was my first-time off-road riding (other than gravel roads), the further we rode into the mountains, the more my confidence grew, passing one test after another. A steep, narrow section with a hairpin turn and a river crossing; check. Muddy, rutted road with a steep slope; stayed upright. It was exciting to be experiencing a different kind of motorcycle riding adventure with all its varied terrain; steep terraced rice fields, broken concrete roads and hiking tracks that act as roads. We saw dogs, pigs, chickens and water buffaloes all on the road; the latter can be quite dangerous. At this point, any reservation about not taking our own bikes and hiring small local motorcycles was put to bed as I know I would have dropped my heavy BMW many times on the first day.

Back at the homestay, we joined the villagers for their New Year’s Eve celebrations. An urban foodies dream, all the food was local and as fresh as it comes, serving a mixture of duck, chicken, pork, pumpkin leaves, beans and rice. The seemingly endless New Years celebrations—they go on for a month in Vietnam—, meant the crew were downing more shots of the homemade rice spirits at both lunch and dinner. A couple of days in and some of the group were beginning to tire of drinking this heavily.

After an afternoon snooze, we hopped back on the bikes for a ride up the mountain towards the Chinese border. This time we rode on broken tarmac instead of hiking trails, testing out each other’s bikes, coming to the conclusion that the modern Honda XR150 was by far the best. The ride to the border was a real pleasure with sweeping mountain turns offering views of rice paddies and the mountains beyond. Our guide ventured—without us—further up towards the border and found himself questioned by the military police; not recommended. 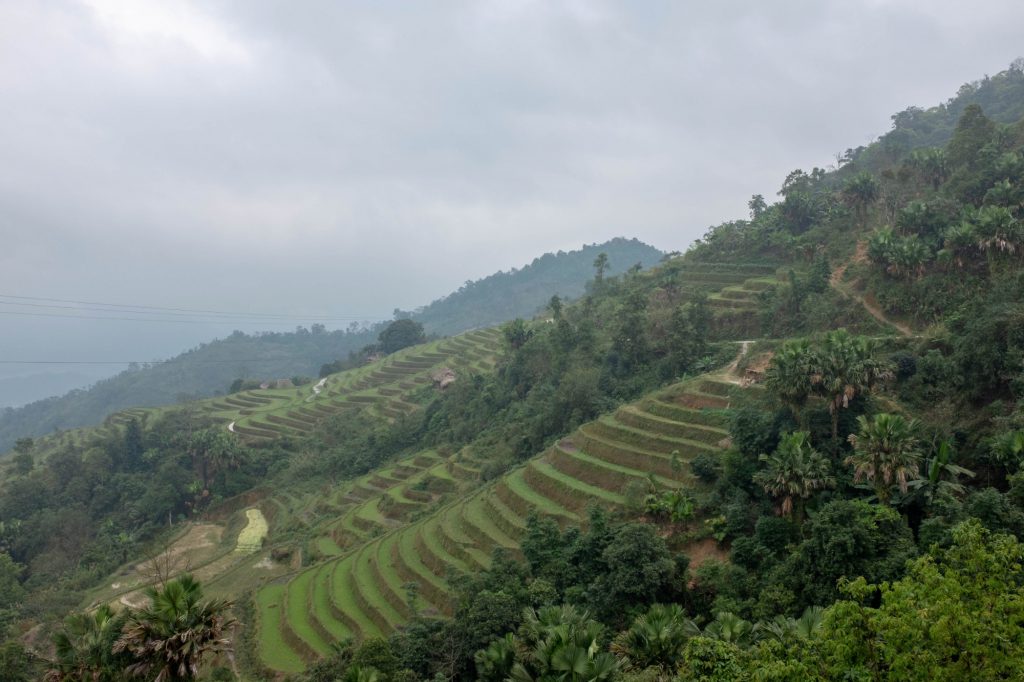 Waking the next morning to the sound of rain, the next six days would be spent on the road with only the clothes on our backs and a small pack; this meant packing carefully. After a delicious breakfast of banana pancakes, we set off in our wet weather gear for an hour or so of easy riding on the smooth tarmac in the heavy rain. As we rode on, the roads became steadily narrower with more potholes until we finally turned onto a dirt track, slick with mud from the mornings’ rain. The Honda XR150 I was riding and the 1980’s Yamaha dirt bike handled the terrain well.

I thoroughly enjoyed the next few hours of off-road riding, as I became more comfortable with the bike moving around underneath me. Until this trip, I had no prior interest in or experience of dirt bike riding. After this ride, I can see the attraction. It is an entirely different motorcycling experience, much slower, dirtier—we were absolutely covered in mud—and a far more technical challenge as you have to stay upright when the conditions conspire to throw you face down into the mud.

Some of the other riders in our group, all on old street bikes with street tyres, had a much tougher time this day; slipping and sliding around with practically no grip. One rider described their front wheel as having the grip of a football. They did well to get through this day on their bikes, staying mostly upright. After lunch during which the rain came down in sheets, we set off on roads that would normally be described as poor—think enormous potholes filled with water, mud and cracked concrete—, however, these now felt like smooth tarmac in comparison to the mornings ride through the mud. 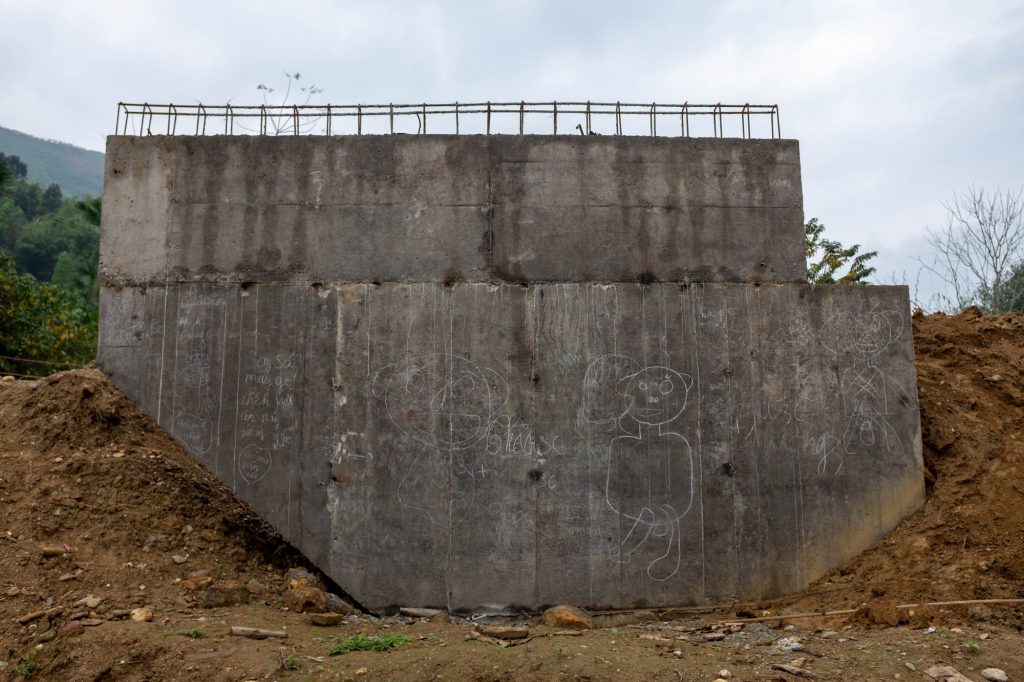 At 4 pm we arrived at our homestay for the night. This was another clean, hospitable place with excellent food. It was situated in a picturesque village overlooking the rice paddies; essentially my mental image of Vietnam. One of the crew shot drone footage of us riding through the rice fields—it’s a very atmospheric place— before walking into the village to see the night markets. There you could buy everything from vegetables to freshly severed cows heads sold from plastic tables right on the street.

Later at dinner, a big storm came through bringing with it mighty lightning strikes, one of which took out the electricity to the whole area. Impressively, the food served was still excellent with fresh fish, vegetables, pork, probably the best eggs I have ever tasted, all cooked with skill on gas fires and hot coals. As expected, a large number of shots of rice spirit were also consumed, something which seems to be the norm in Vietnam when there are guests staying. More of our adventures in the mountains in part three. 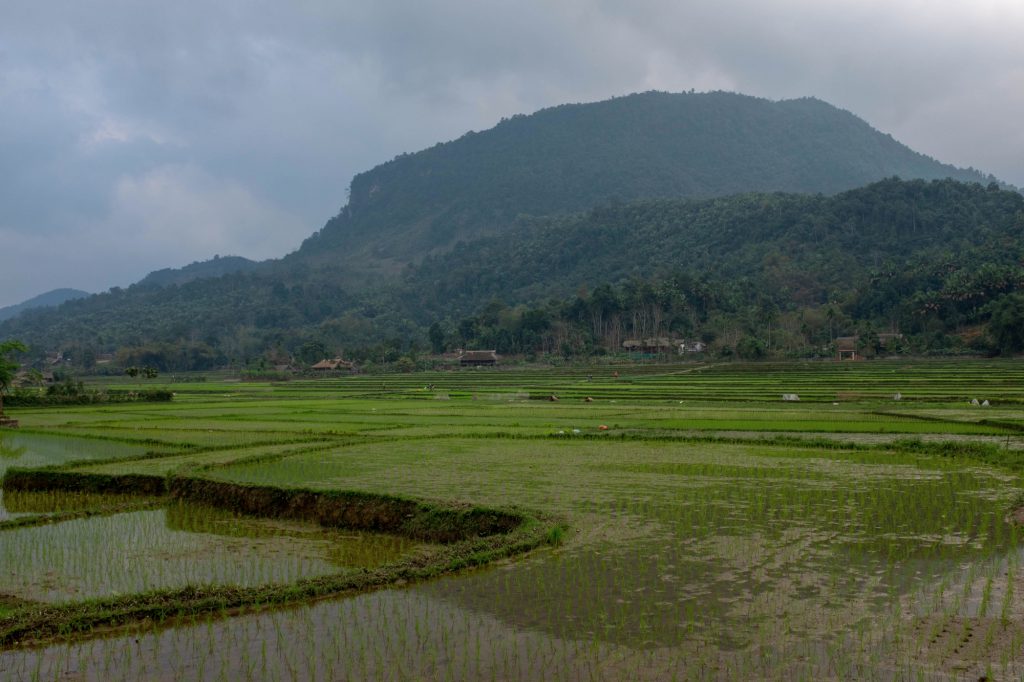 The bikes: these ranged from quite new and well set up in the case of the Honda XR150 to a 1960s 125 and a rough but effective Old 1980’s Yamaha dirt bike. There was also a 1980’s Korean KYMCO and a mid-2000’s Honda 125 Repsol replica. Overall these got the job done in a wide range of conditions. While not as good as our regular rides, it goes to show that you do not need modern technology to have an adventure, just a willingness to go. 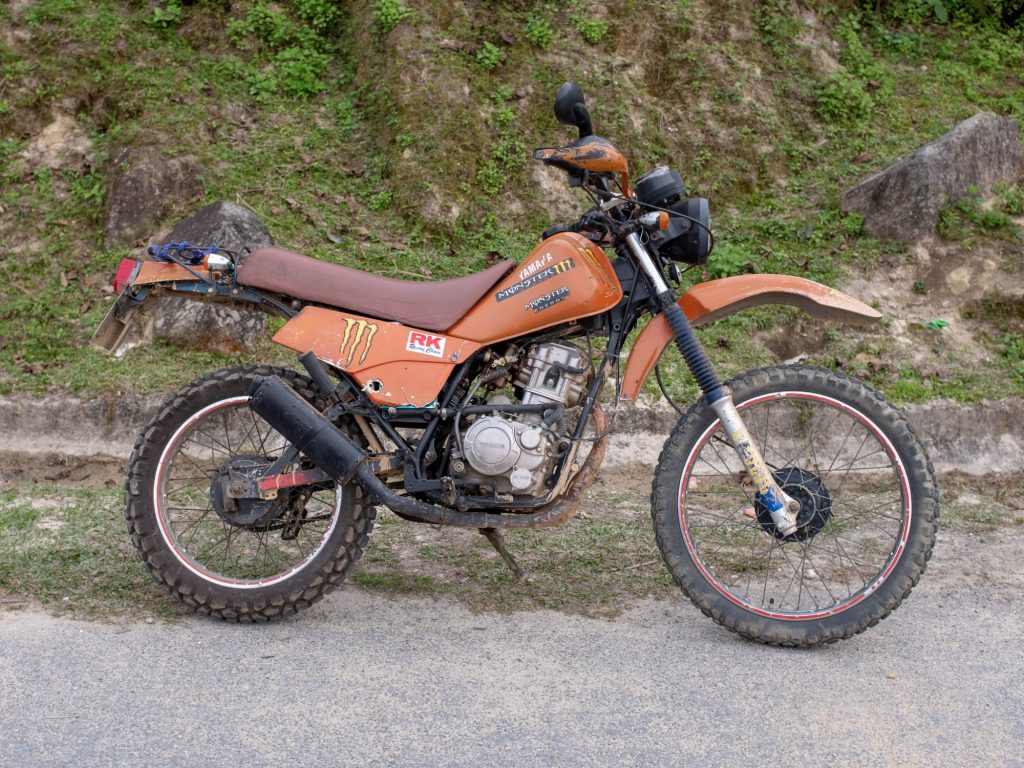