This four-day adventure started superbly with a windless ride through the Royal National Park south of Sydney. The tarmac was smooth and the temperature ideal for motorcycle riding. A low number of cars meant I had the road largely to myself as I rode through the trees to Stanwell Tops. The views from this elevated position were spectacular as always with the ocean surface smooth and the nearby hills green.

Electing to take the scenic, and often longer route is at the spiritual core of motorcycle riding. The Sea Cliff Bridge stands majestically out from the water as I ride south towards Thirroul and Wollongong before joining the highway to Berry; my first stop for the day.

Along the way to Berry, I spot the Nam Tiem Temple. Every time I pass this way I think, I should go in. However, a mixture of fear of it not being appropriate (I’m not a Buddhist) and long days of riding have meant I have never stopped here. This day, I decided to take the turn off and visit the temple. 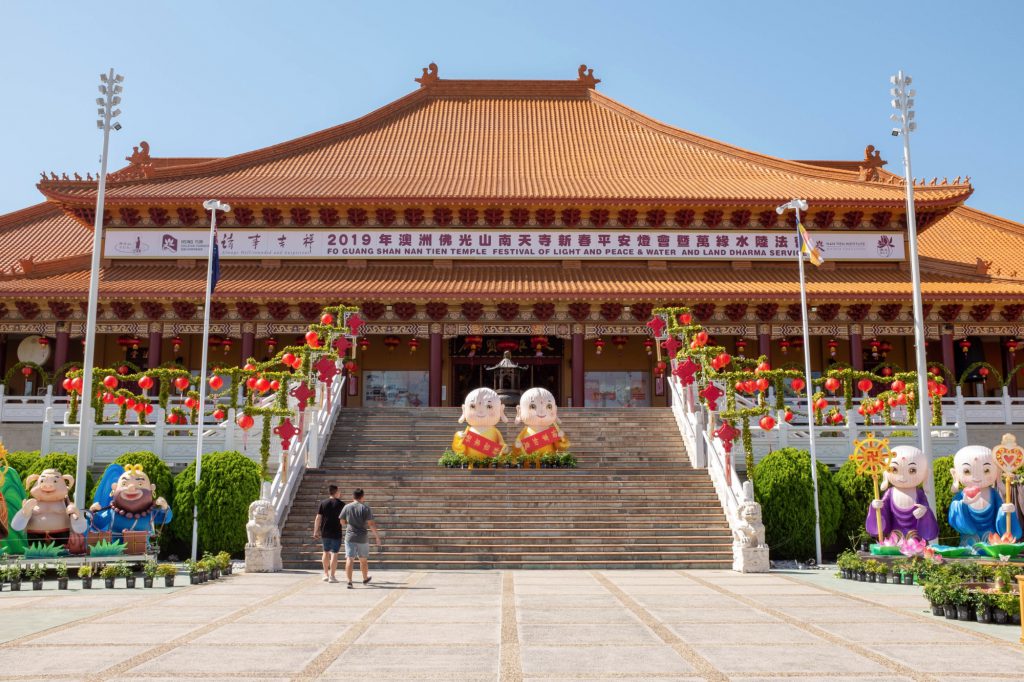 Arriving, the cacophony of noise coming from the cicadas struck me before I even had a chance to note the beautiful grounds. The Buddha seemed to be smiling at me as I entered, first viewing the Pagoda and then the Main Temple. I meet a trio of monks, taking their photo for them before walking around the grounds. The Temple is impressive, as was the exhibition of wood-fired pottery in the museum.

Walking back to the bike, I was glad I’d stopped by. So often we miss these little opportunities to expand our experiences. Next, it was time for refreshment time. I continued south to Berry for tea and a croissant at the Berry Sourdough Cafe. Excellent as always, the croissant was soft and buttery. Delicious.

Back on the bike and on my way to one of my favourite coastal towns, Bendalong, I had a moment of awareness about my situation. Right at that moment, there was nothing more I wanted than to be there at that time. Often while riding I think about how to improve certain elements; gear, clothing, bike, attitude, etc. etc. As I ran through any potential improvements, I could not think of a single thing that would measurably improve the ride at that time. Everything was perfect, from the roads to the motorcycle (BMW F700GS with panniers), the gear I brought, even the fact I was about to turn off the highway and have a swim in the ocean.

Arriving at the beach, I changed quickly and jumped in the water. After 35 degrees and blazing sunshine on the highway, it was pure bliss to be in the ocean. Diving down into the water I spotted a yellow fluorescent object and picked it up. It was a diving snorkel and mask. Resurfacing, I emptied the sand and tried it on. While not ideal, I was able to join a small crowd of people feeding and frolicking with two tame stingrays. It is not often that we are able to get up close to these kinds of animals. It was very special.

Onwards through the Canjola National Park, I headed to Pilgrims at Milton for a healthy lunch. Recently Pilgrims have added a mural to the wall; photographed here with my juice. While there, I looked at the map and decided I would stay at Bermagui, a coastal town a couple of hours south. On a previous trip, I passed through Bermagui and liked the feel of the town. I was looking forward to another visit.

Riding south, you pass through the Boyne State Forest where the air is cooler with the trees providing a canopy of shade. On the road outside Narooma, the skies opened with a torrential downpour, with multiple lightning strikes every minute or so. I put on my wet weather gear just in time. Visibility was down to around five metres and speeds less than 40km/h. I considered stopping, but it didn’t look safe as no one would see me on the side of the road until it was too late. I pushed on for a long ten minutes before it lightened up and by the time I reached Bermagui, it had almost stopped.

I was booked into the Bermagui Beach Hotel-Motel, an ocean-front property with small, but adequate rooms. However, it is the restaurant bar area that is a real delight. The grilled salmon, salad and chips were superb and consumed while overlooking the ocean. Who could ask for a better end to a great day of motorcycle riding?

Taking a stroll around the town after dinner, the weather turned on a show. There was thick fog, coupled with low clouds, rain and lightning strikes out to sea. Unfortunately, this did not photograph well, which is a shame as it was particularly atmospheric.

The next morning I woke before 6.00 am and went for a walk and swim. The sun struggled to make itself be seen through the mist; remnants of last nights storm. The morning was cool, and I was glad for my Patagonia light fleece vest as I was in shorts and a T-shirt. Around 7.00 am it warmed up and I went for a swim. I met an extremely fit looking older couple. They must have been nearing 70 and looked very fit in their swimmers; a reminder to keep up the activity and healthy eating. 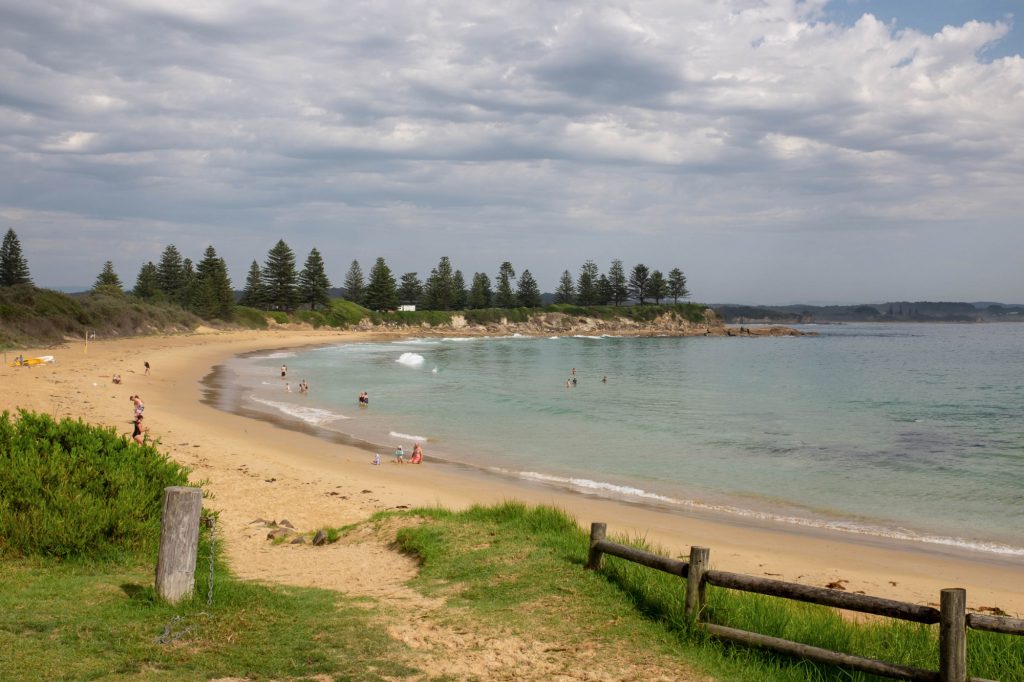 After packing the bike, I breakfasted on a cacao, banana, dates, chia smoothie and sencha green tea from Gulgag Organics. It is great to be able to eat this way on a road trip as you feel light and alert. After lunch—another smoothie—, I read more of Zen and the art of Motorcycle Maintenance while sitting contemplatively by the ocean. What started as a chilly morning was becoming muggy. Switching to the iPhone, the next hour and a half was spent listening to music on the rocks overlooking the ocean. This is something that I used to do as a kid on my Walkman. Just listening and enjoying the music. It was great. Music, like scents, has a way of transporting you back to a previous time. This floods one with memories, reminding me of my hopes and dreams at different times of life. It was a great experience bopping along to the music by the sea.

The day’s riding comprised only a short trip to Central Tilba followed by a two and a half hour ride to Jindabyne. It has been great to have the extra time in this part of regional Australia. Bermagui is a great little town. I really enjoyed my stop here. Before leaving I bought two cast metal dog bookends and a hardcover book from a secondhand store. Not my usual purchase, although I do have a place in mind for them.

Centra Tilba was hot and humid as I stopped for tea and scones at Eumm-tea. The town was alive with people as I searched the Tilba Woodturning Gallery for a gift for my parents 50th wedding anniversary; the reason for this trip to the mountains.  The gift secured, it was onwards to Jindabyne, via the twists and turns of Brown Mountain. At Nimmitabel, I detoured from my usual route through Cooma, taking Springfield Road through Dalgety to Jindabyne. This route is quite deserted with fast gravel roads and sheep being herded. The gravel was compact and the roads relatively straight meaning you could travel at 100km/h with reasonable confidence; unlike the loose gravel that can be found in some of the mountain areas. While not quite as good as the Cooma route, it was nevertheless a great experience taking the road less travelled.

The next day was a lovely affair, celebrating my parents 50th wedding anniversary. This is a great achievement and one I hope to emulate; although being 78 years old as I will have to be, can be put off for a while. A good breakfasted at the Parc Cafe next to the National Park’s office set the stage for our hike from Thredbo to Kosciuszko.

Pleasingly, the previous nights’ storm had largely eliminated the smoke haze leaving a clear, windy day for the return trek from the Thredbo chair lift to the summit. Thredbo is easily accessible from Jindabyne, being only 30 minutes along the Alpine Way. The walk is moderately hard, with raised decking most of the way to protect the environment from erosion. Taking around four hours, it is a great summer walk and is so different from the mountain when it is covered in snow. 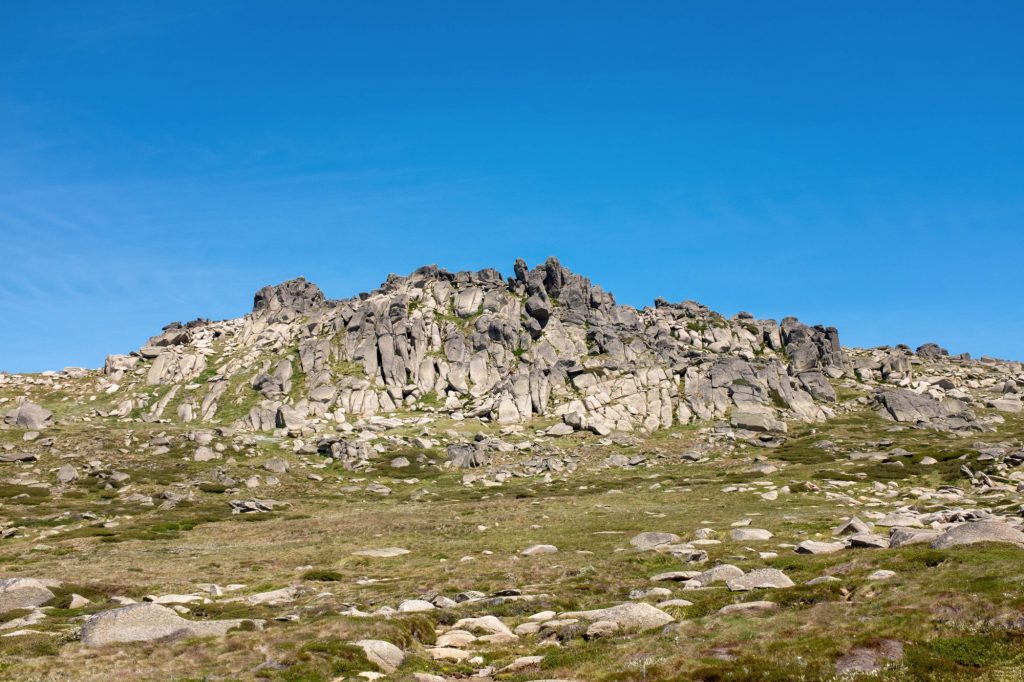 Saying our goodbyes the next morning, it was cold and overcast as I rode out of Jindabyne. Taking the Snowy Mountains Highway to Tumut, the initial section was completed in watery sunshine before a deep mist overtook the entire mountain. This section had visibility down to 3-5 metres, being both a glorious and worrying sight. Dead kangaroos littered the road and it looked like a place bikers should not be at that time. Pushing on with care, the mist cleared as I neared the town of Adaminaby; home to the Big Trout. Created by artist Andy Lomnici in1969 and then restored in 2010, you have to love this about Regional Australia. There are many of this kind of enormous flora and fauna including bananas, pineapples, sheep and the Big Prawn in Ballina. 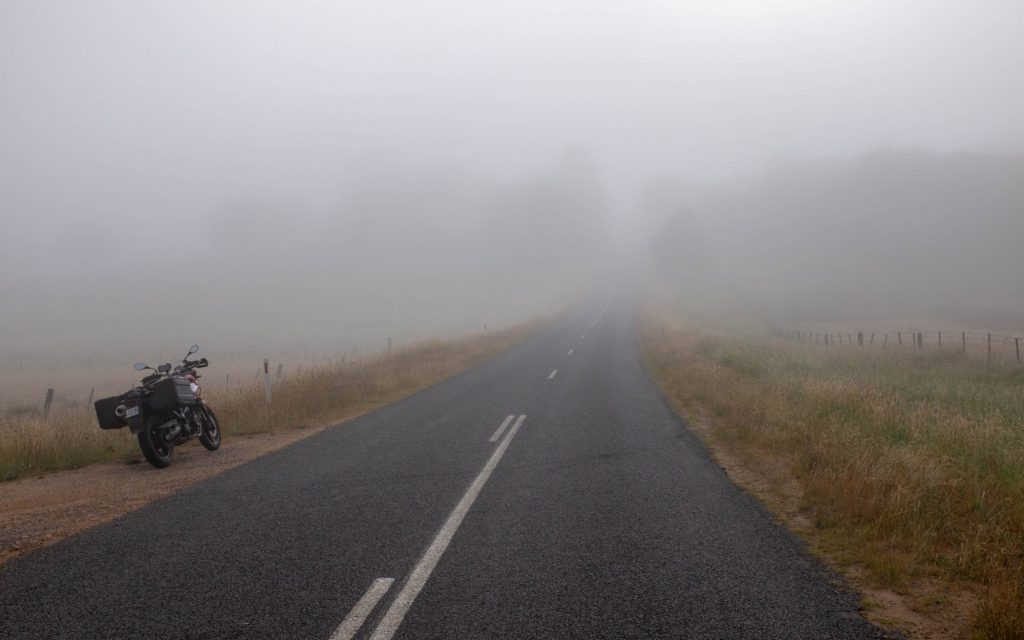 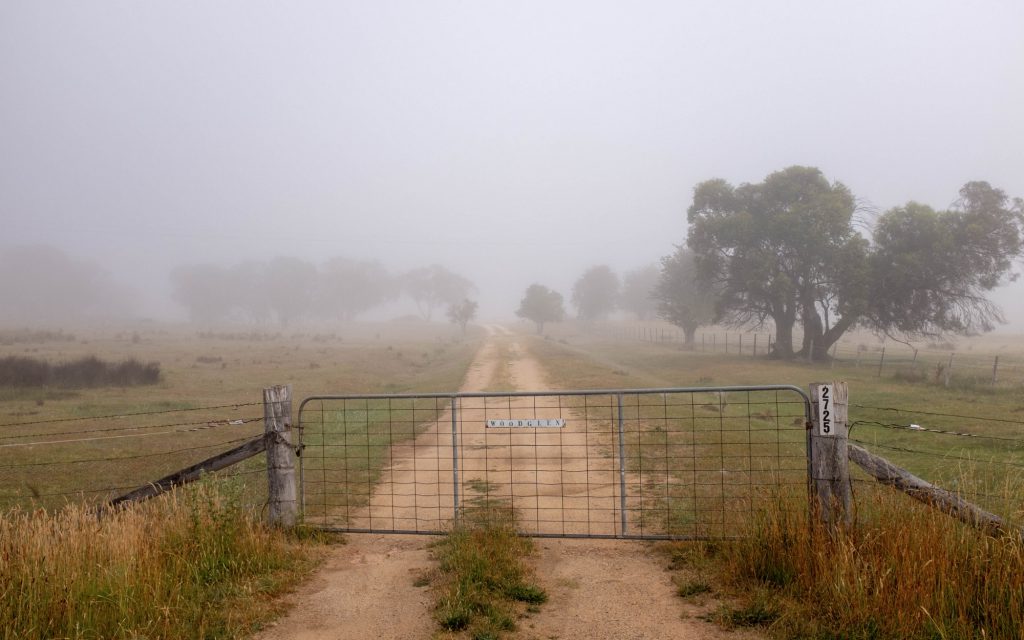 After warming up at the cafe and taking photos of the Big Trout, I rode on and the next 130km to Tumut was absolute bliss. The sun broke through the clouds, burning off the remainder of the mist and elevating the temperature to mid-twenties. This is an area of fast winding roads mixed with sharp hairpin turns as I rode through Kosciuszko National Park. Along the road, there are many signs warning drivers of wildlife ahead; everything from kangaroos to wombats to wild horses. The latter I did, in fact see as there was a young horse standing right on the road.

Stopping at Tumut, I filled up on petrol, food and caffeine, fortifying myself for several hours of freeway riding that would be necessary to get me back to Sydney in time. Once again, this was a great trip, as I enjoyed the variety of riding conditions, people I meet along the way and the celebration of my parents’ wedding anniversary.

Next riding adventure; the mountains of Vietnam. Stay tuned. 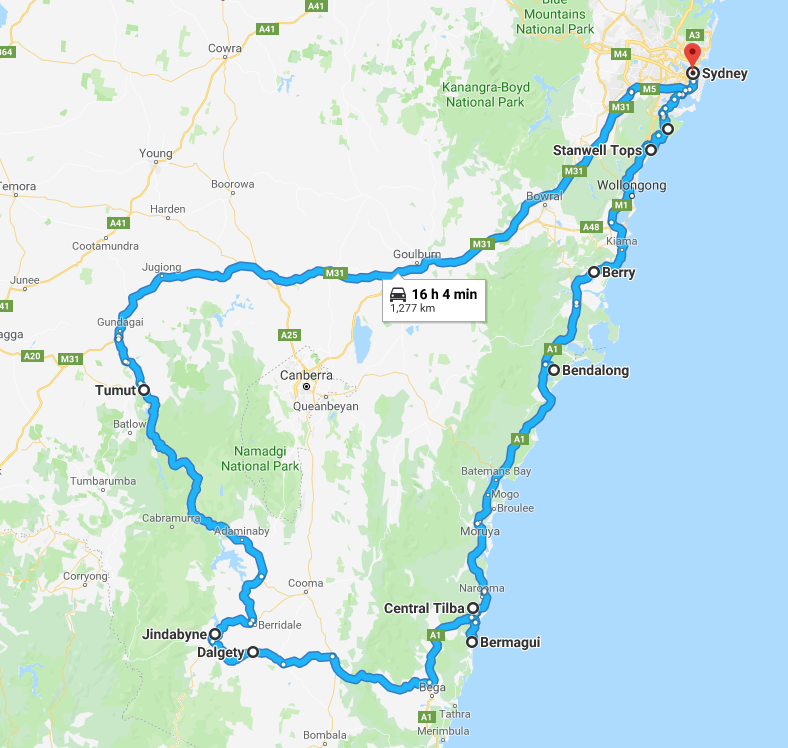