The Lloyd’s building (also sometimes known as the Inside-Out Building) was designed by architect Richard Rogers and built between 1978 and 1986. Like the Pompidou Centre (designed by Renzo Piano and Rogers), the building was innovative in having its services such as staircases, lifts, electrical power conduits and water pipes on the outside, leaving an uncluttered space inside. The twelve glass lifts were the first of their kind in the UK.

I love this building, surrounded by some of the oldest buildings in London, it somehow works beautifully (although many would disagree…), walking around it is an experience all of its own, if you get the opportunity, inside is also incredible.

It was used in may movies, including; Code 46, Spy Game, Proof of Life (Russell Crow), The Avengers, Hackers, Mama Mia, and Entrapment. 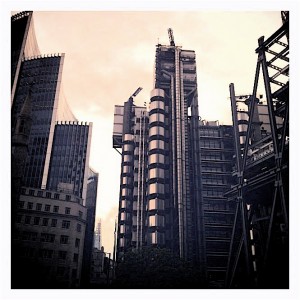