The John Muir Trail is a long-distance hiking trail taking in 338.6 kilometres of California’s Sierra Nevada mountain range. On this visit, we hiked for ten days in August, completing a section of the trail from Devils Postpile to Yosemite Valley. This post covers my experience on the trail between Devils Postpile and Ediza Lake via the Minaret Loop.

Stocking up on provisions for the first five days, we set off by bus from Mammoth to Red Meadows. After all the planning that went into the trip, it was satisfying to be on the trail at last as we completed the short walk to Devils Postpile. At first the vertical columns of basalt appear to be wood as it is so unexpected to see this kind of rock formation. While its uniqueness offered an intriguing distraction, we were keen to push on, re-joining the JMT for what turned out to be a punishing six hour trek to Minaret Lake.

It must be noted that for someone who normally works in an office, carrying a 20+ kilogram backpack takes a little getting used to. Fortunately, my New Zealand designed AARN Peak Aspiration pack made this a surprisingly easy adjustment.

Arriving at camp, we were greeted with mirror-like views over the water with clusters of snow remaining from the winter months. Peaks surrounded the site with plenty of fresh water and a relatively flat surface making for a good camp. As this was one of the first times many of the group had used their tents, there was a feeling of relief in the campsite as the darkness descended when all the tents were set up and the cooking had begun. For those unfamiliar with hiking in this part of the world, it is mandatory that you carry bear-proof food canisters. This necessitates walking your canister well away from the campsite to reduce the likelihood of an encounter with bears; something I was quite keen to avoid.

The next morning, we woke to glorious sunshine and broke camp for the Minaret loop track to Ediza Lake. This involved a strenuous climb to Cecile Lake where we were greeted by a steep traverse across snow-covered scree. Foolishly, I did not put my micro spikes on and traversed the long section with the ever-present danger of a slide into the icy lake below; this was not an enjoyable stretch. Clearing the section, we then climbed across a bolder strewn area before reaching the pass proper where the steepness of the decent to Iceberg Lake became fully apparent.

This was where we had to be cautious as it was probably the most dangerous section of the trail being closed until the week prior due to 2017’s record snowfall. Climbing down towards Iceberg Lake, the scree was loose underfoot causing me to fall to the ledge below, luckily sustaining only scratches and a large bruise. Continuing downwards to the snow section, it became clear that there was another 500 metre traverse across snow covered scree to the other end of Iceberg Lake. This time, I put on the micro spikes and wow, do they make a difference. Still, the ever-present danger of a slide into the glacial lake existed, so care was required. I must admit to breathing a sigh of relief when all five of us were safely across to the next section of boulders.

The final push for the day contrasted sharply with the morning’s adventures. We walked through beautiful wildflower meadows with robins and marmots being sighted often. Following the trail down, toward our campsite at Ediza Lake, we had a worrisome river crossing due to the snow melt which had washed the bridge away. Wet boots and tired bodies, we set up camp and collapsed from two days of heavy walking and very little sleep due to jet lag.

The next morning we enjoyed the solar eclipse in the reflection of Ediza Lake. One of the team brought viewing glasses and this made for a great experience in spite of the ever present mosquitos; bug repellent and a head net essential in this area. We then set off to the foot of Mount Ritter and Banner Peak. These are imposing mountain peaks that we had previously considered climbing until it became clear that ice axes and crampons were essential.

The next day it is back to the JMT, walking onwards to the magnificent Thousand Island Lake; more on this in the next post. 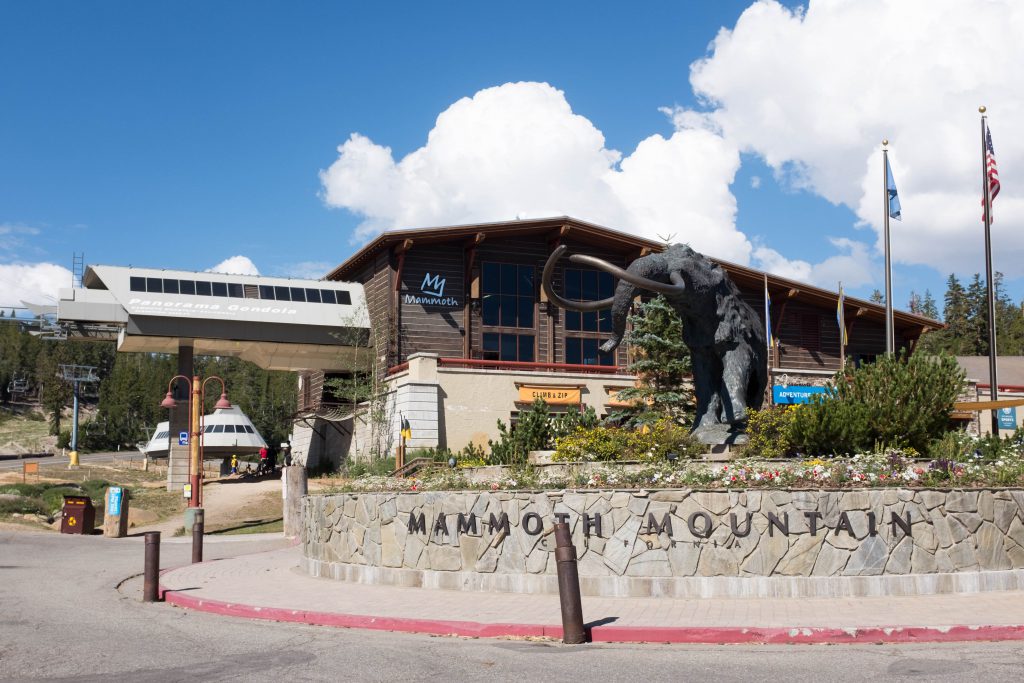 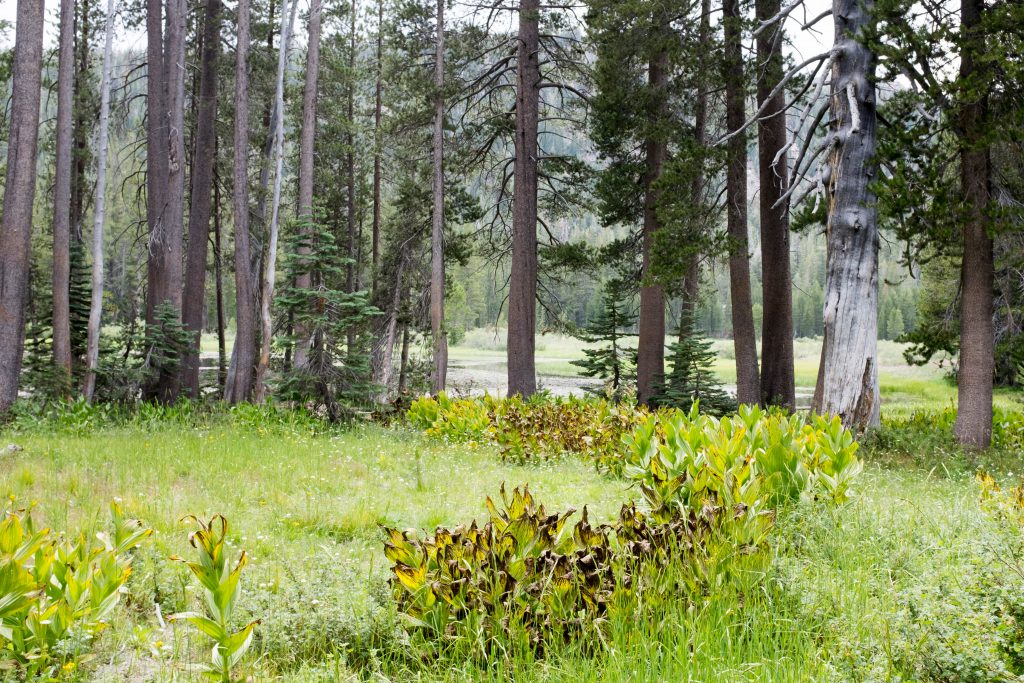 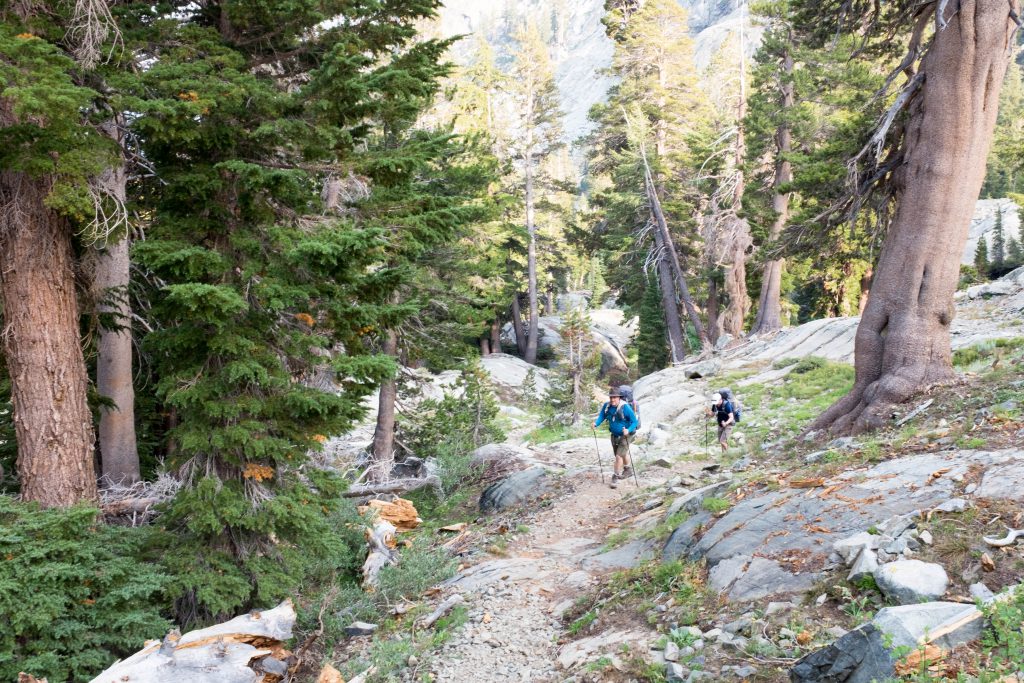 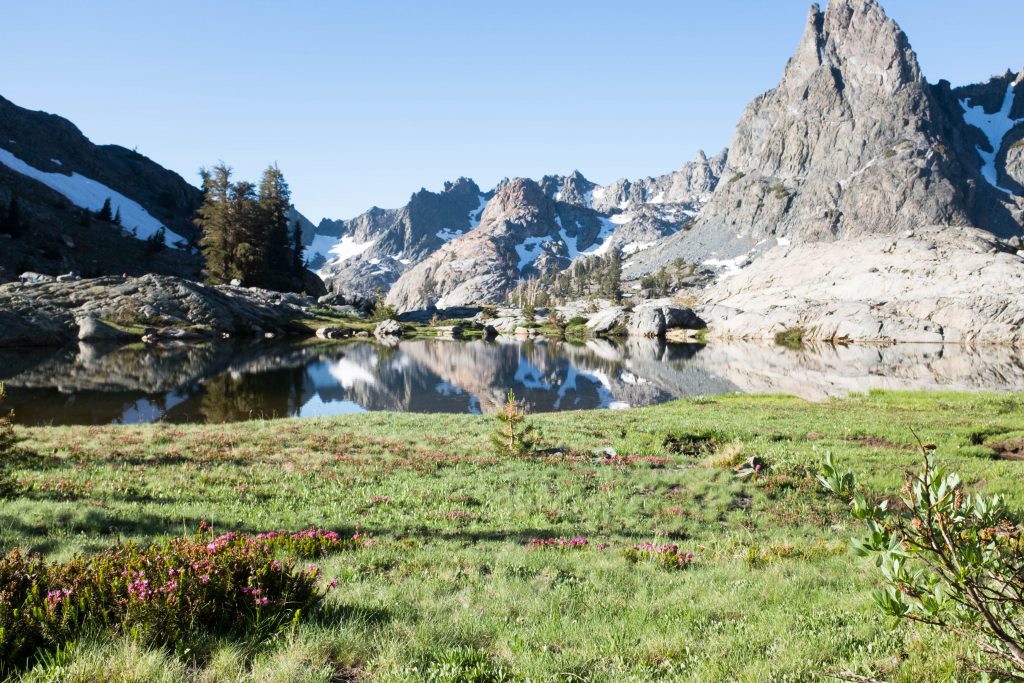 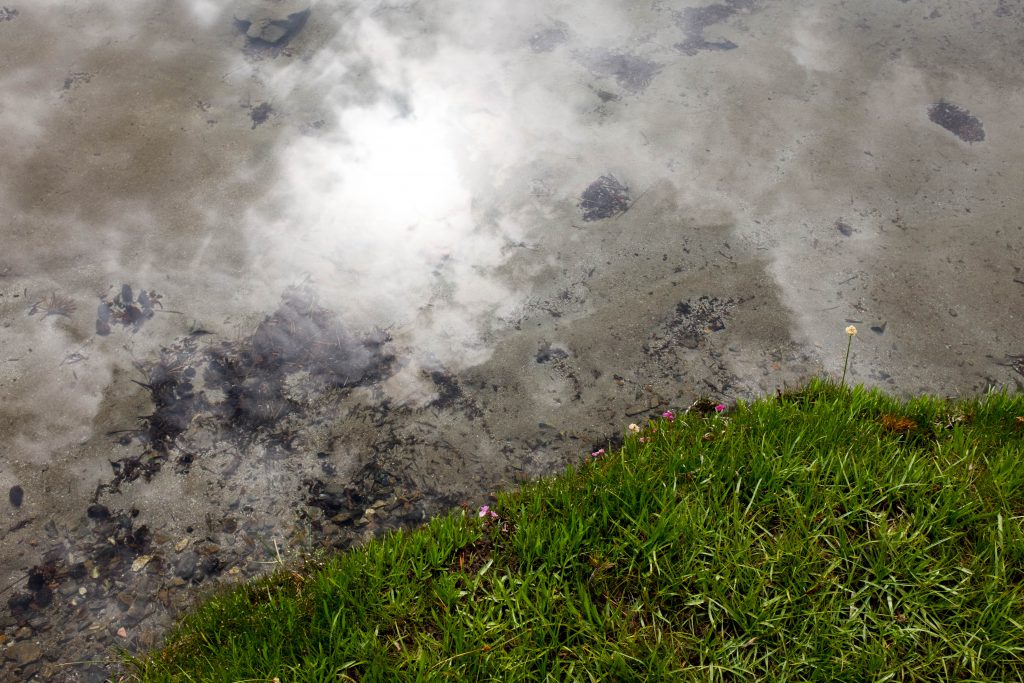