The Barbican Estate History | The Barbican estate built within a badly bombed area of the City of London. A stones-throw from St Pauls, it comprised originally of three tall residential towers and a collection of terraced housing blocks complete with gardens and a lake. In 1982 Europe’s largest performing arts development ‘The Barbican Centre’ was added to the complex, designed by Brutalist architects Chamberlain, Powell and Bon. Entering the estate induces a strange sensual feeling that I can only describe as travelling backwards and forwards in time simultaneously.

Like the Great Fire of London in 1666 provided an architectural blank canvas on which the Baroque movement flourished, post-blitz London needed to rebuild with direction and relevance in what was to become a very different world from what we knew. That vision was the utopian dream of a new architectural movement named ‘Brutalism’. Getting its name from the French architect Le Corbusier’s term ‘beton brut’ translating literally as raw concrete, the style would focus on a building’s function rather than what were seen as the ostentatious and unnecessary design features of pre-war movements.

Credit : Excerpts from an article by Tom Armstrong 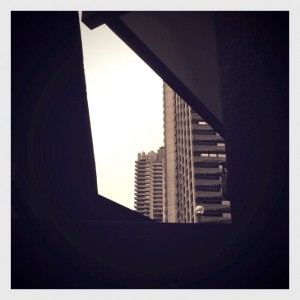 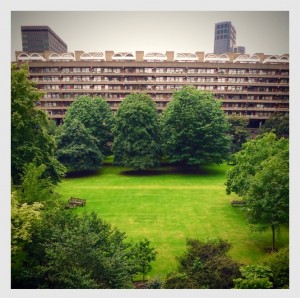