Arriving in Ballina, it was a tropical 24 degrees as we made our way across the tarmac. This airport is small and efficient with the friendly people at Hertz organising our rental car as our Rimowa suitcase turned up on the conveyor belt. Fifteen minutes after our feet touched the tarmac and we were in the car on our way into town. This was a pleasant surprise as it’s been a while since this has happened frankly anywhere that involved travelling through an airport. 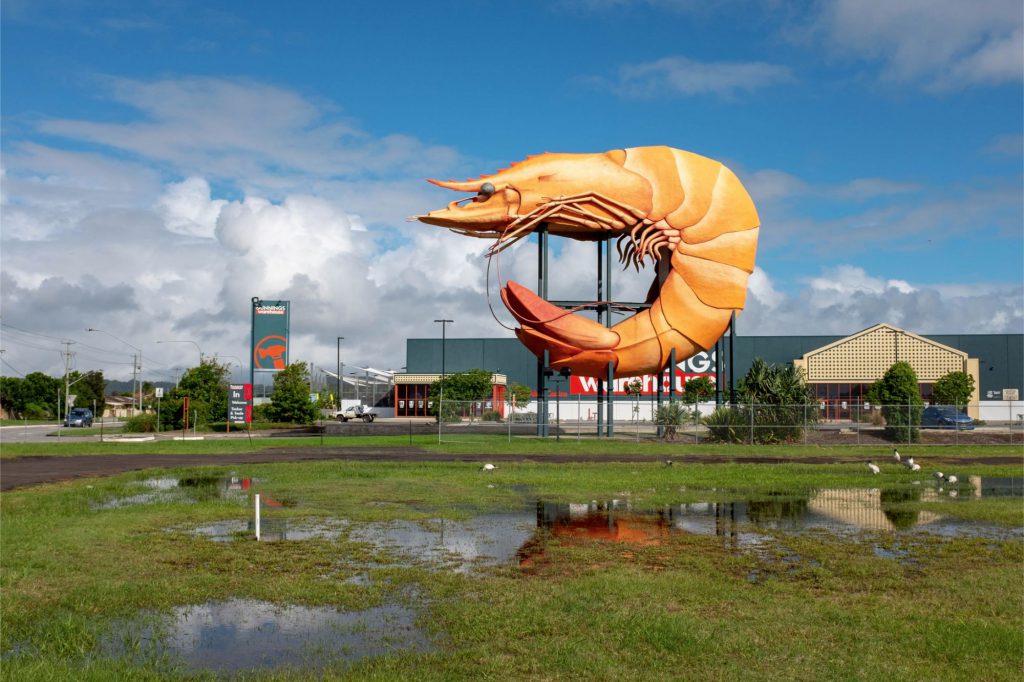 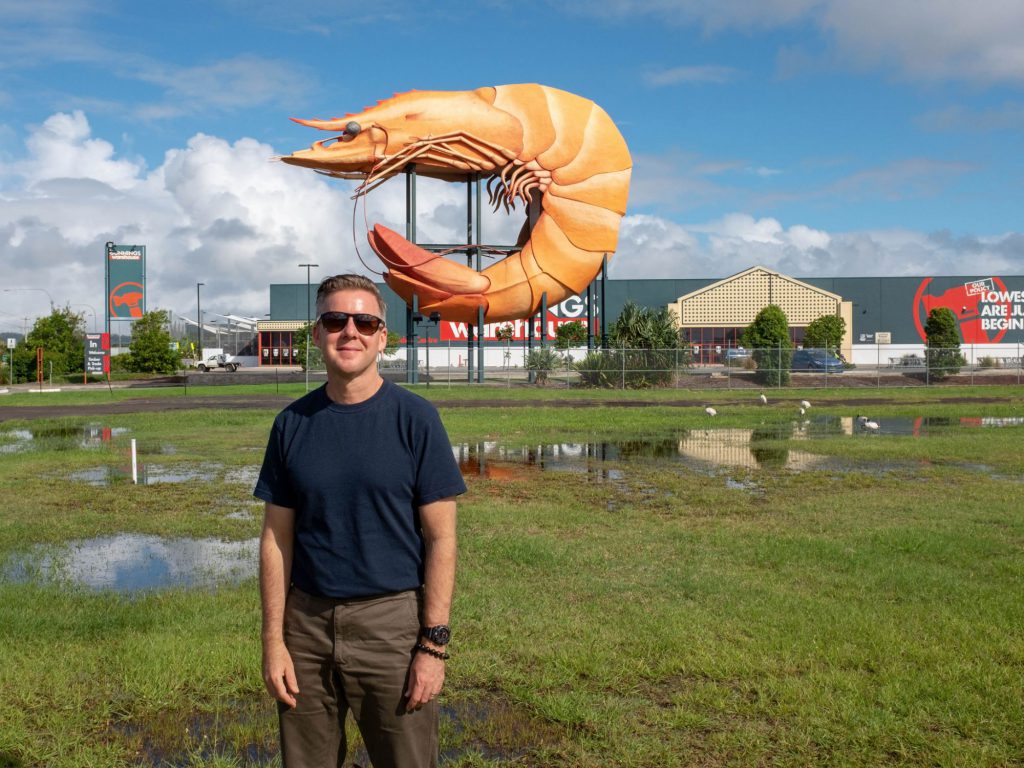 Driving into Ballina, we stopped for a tourist photo with the Big Prawn. This giant crustacean is nine metres high and weighs 35 tonnes and was recently restored with funds donated by Bunnings. Before meeting friends for breakfast, we took a stroll on the Esplanade. Along the way, we spotted a plaque commemorating Sir Charles Kingsford Smith’s 1929 transpacific flight from the USA to Australia. Interestingly they found themselves off course and stuck land again in Ballina before flying onwards to Brisbane. We walked in the park where the plane landed, stopping by a pond where fish were intermittently jumping clear out of the water; look carefully at the middle right of the pond photo. 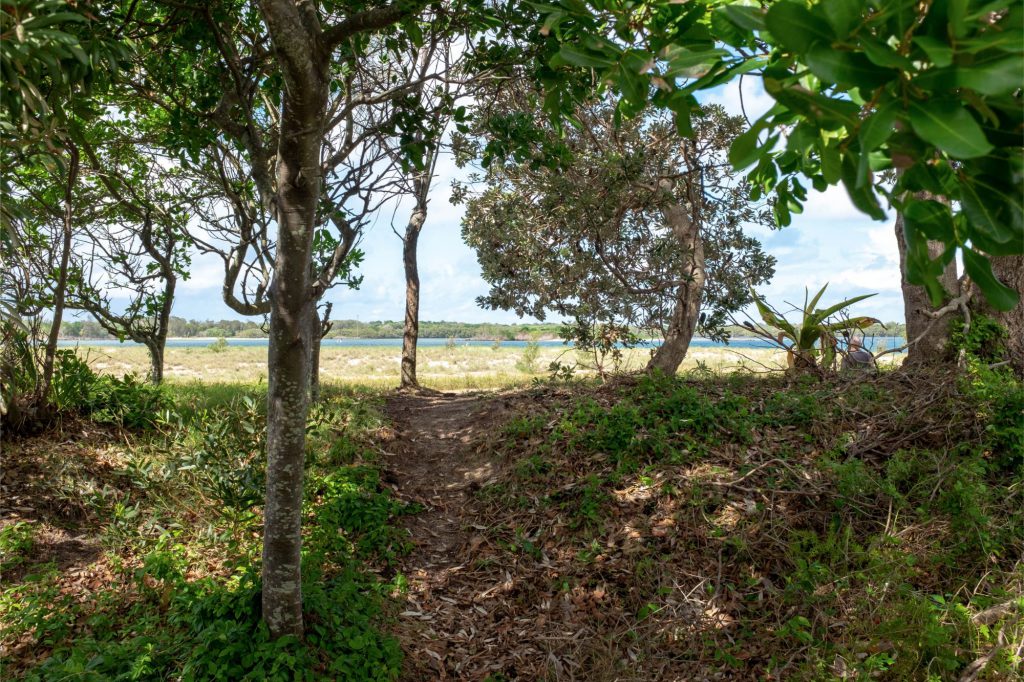 Late breakfast with friends at the Ramada and we were off to the historic township of Bangalow; see murals below. This is a smart town of renovated weatherboard cottages, natural therapeutic treatments and expensive boutiques. The town has a unique feel to it as we ducked under various eves to avoid the intermittent tropical downpours.

After a pleasant walk around Bangalow township, it was off to our accommodation in Brunswick Heads at The Sails Motel; this is the modernist motel I stayed at on my motorcycle road trip in January. As we walked around in the increasingly heavy rain, we stopped in at the Brunswick Picture House to see what was on over the weekend. Serendipitously, an all-ages cabaret show had just begun, and we decided to buy tickets. The show featured a mix of acrobats, jugglers and Dr Hubble, a soap bubble blowing performer who takes the idea to unexpected heights; you really have no idea what is possible with bubble blowing until you see a professional performer. 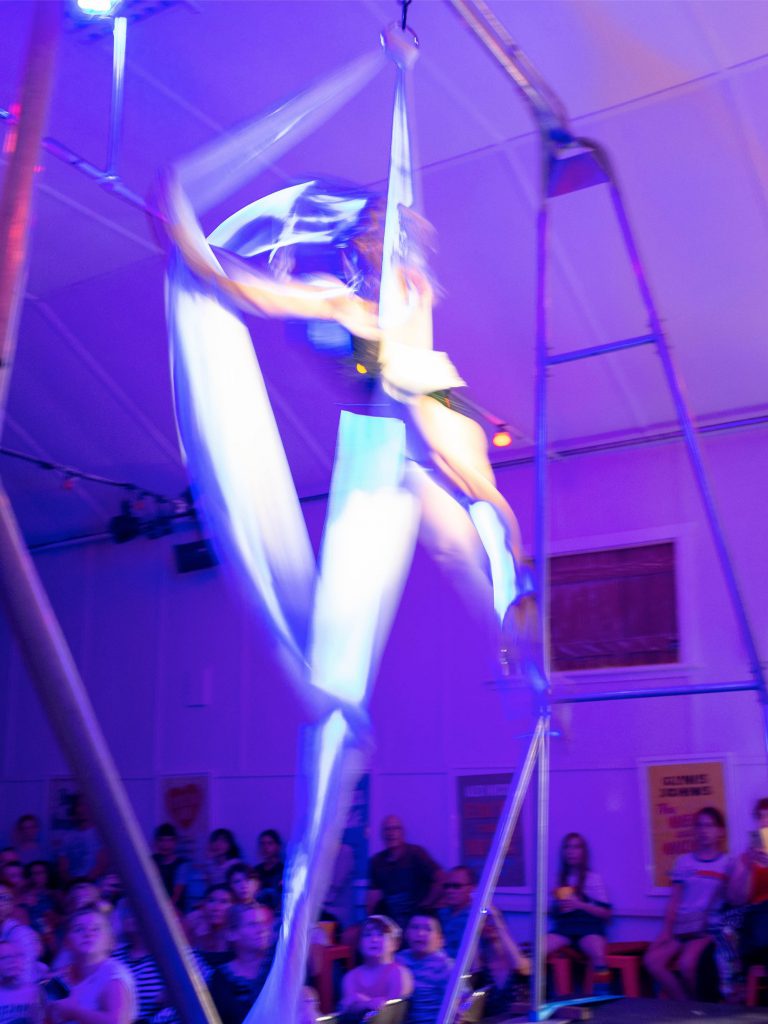 Walking towards the river, the tropical rain continued its downpour, forcing us to seek shelter; this time at a vintage clothing market. All sorts of good things were on offer from rattlesnake cowboy boots to mink coats; neither was quite our style. Next, it was thick shakes and smoothies at Milk Bar, a hipster hangout with good coffee, healthy smoothies and organic gelato. Walking out across the wooden road bridge, we headed along the breakwater to the sea. It was windy and grey, signalling the change in seasons from summer to autumn. The muted colours were beautiful as the low grey clouds met the light taupe sand and the turbulent grey/blue of the sea. 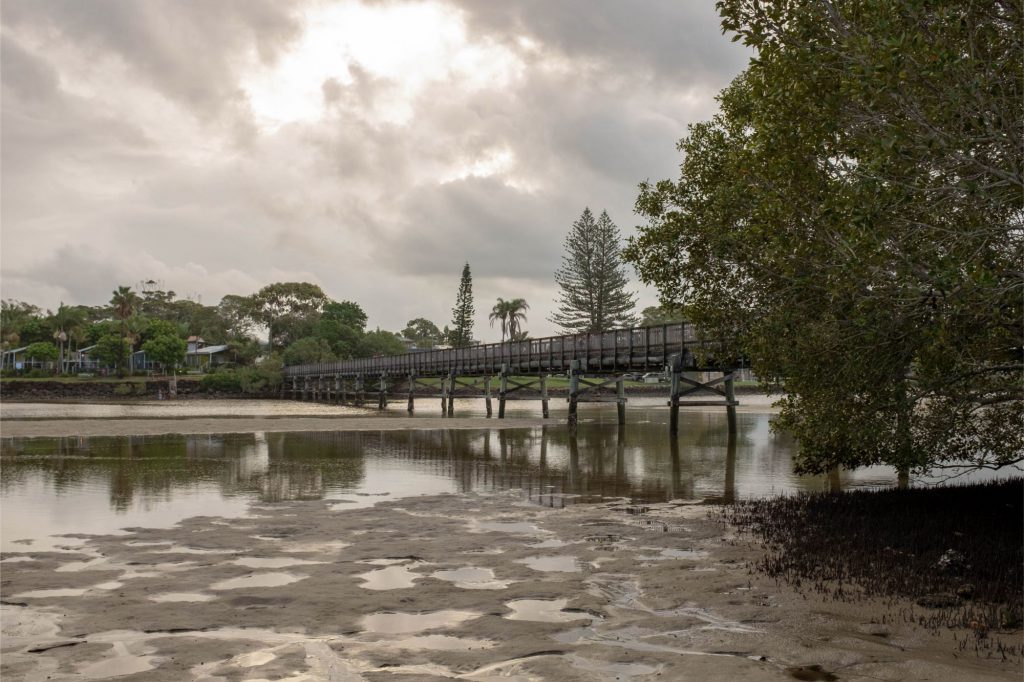 Later while exploring the town’s various food options, we settled on La Casita. This is Mexican cooking from the team behind the two-hatted Fleet restaurant and is high calibre food. We ate grilled corn with paprika, fish and green chilli tacos, pickled vegetables and a delicious octopus with avocado and black beans. This was good food and well-priced at around $80 for two people.

As I was dropping off to sleep that night, the tropical downpour continued. I mentally prepared for twelve hours in a field at Bluesfest the following day. As the saying goes, there is no such thing as bad weather, only the wrong clothes. I would be taking my Patagonia waterproofs and Goretex Scarpa hiking boots for the mud. After a sleep in, we were on holidays, after all, we headed to The Farm, a Three Blue Ducks restaurant on the outskirts of Byron Bay. A quick walk around the property to see the animals and we tucked into the breakfast special; a delicious variation on Eggs Benedict with bacon, farms greens, poached eggs and hollandaise sauce. Just like on my last visit in January, the cooking, service and venue make this an outstanding destination. 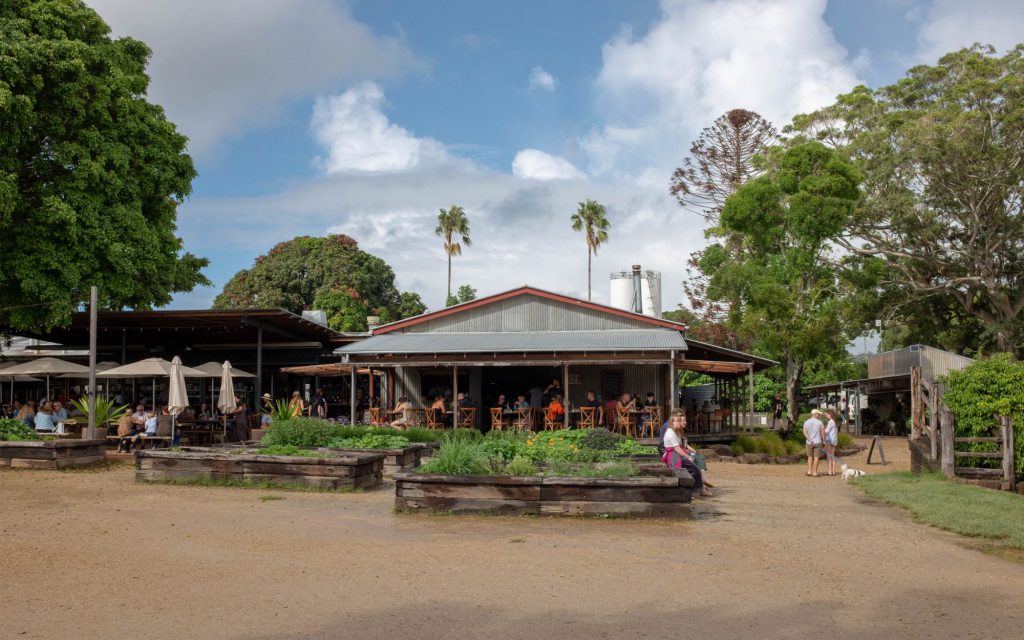 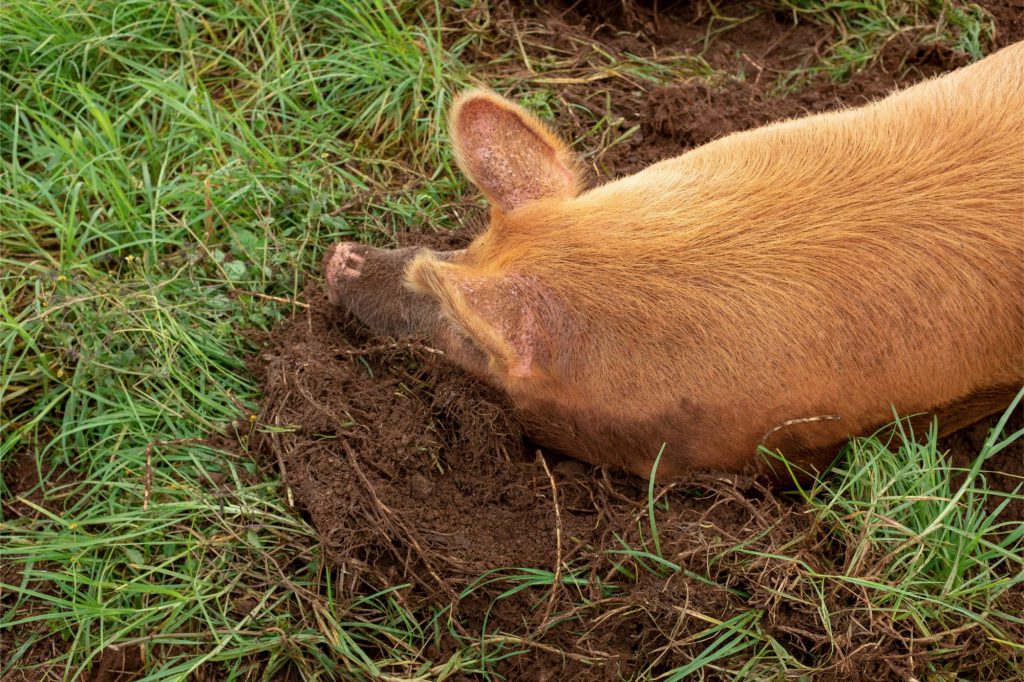 Next, we crawled through the traffic into Byron Bay township with the single lane road not cut out for the volume of visitors over the holidays. While the beach is undeniably beautiful, as is the walk to the lighthouse, for some reason Bryon Bay never really grabs me. After a couple of hours, I’m always ready to move on.

The reason for this trip was the 30th Anniversary Bryon Bay Bluesfest, a festival of blues and roots music. The line up included headliners Iggy Pop, Paul Kelly, Jack Johnston and Ben Harper and the Innocent Criminals supported by many other great acts. On arrival, the first tent I passed had the ABC’s Rockwiz, a variety show with guests playing music in between answering quiz questions. This was a great show with humour and musical prowess from all participants. The highlight was Sarah McCleod’s (Superjesus) rendition of Led Zeppelin’s Rock n Roll. That woman can really rock with a performance full of energy. It was a great way to open the days’ festivities.

Next, it was the American rockers Vintage Trouble. It was a polished performance with the lead singer crowd surfing the entire length of the tent. This was great entertainment with the music to match. After wandering around the stalls selling everything from locally made leather goods to vegan food, I caught St Paul & The Broken Bones. This was quite a show with a band comprising guitar, bass, organ, drums, trombone, trumpet and saxophone and a lead singer who came out in a black sequined cape. He was a very different style of performer from the fit young people you usually see fronting bands. He is somewhat overweight, balding, wears glasses and was fabulous in his sequined cape. This goes to show that whatever you’re doing; really own it. People tend to accept it when it is done with confidence, no matter how outrageous.

Next was a rousing set from Yothu Yindi before local favourite Kasey Chambers came on stage. Playing songs from her ‘Captain’ album, this was a special time for her and the crowd as Bluesfest launched her solo career with this very album 20 years ago. The last two acts were Little Steven and The Disciples Of Soul and Ben Harper and The Innocent Criminals. Both were strong performances, the latter having Kasey Chambers join for a duet. Overall, Vintage Trouble followed by St Paul & The Broken Bones were my favourite acts of a great day. Expecting a nightmarish exit from the car park, I was very pleasantly surprised at the organisation and ease of the exit. In fact, the entire Bluesfest festival was well organised and a joy to attend with huge tents keeping the tropical rainstorms off both the festival goers and musicians.

Sunday, we continued our wanderings around Brunswick Heads, stopping for a breakfast of hash browns, poached eggs and greens at the ever-reliable Footbridge Cafe before walking along the beach and swim against the current in the river.

The afternoon was spent exploring Lennox Head and Ti Tree Lake. The relaxed coastal atmosphere puts you in mind to build a vehicle for longer term stay. Suddenly, I can see myself cruising Australia’s tropical coastline, surfing the various breaks. I mentally settled on a long wheelbase Toyota Landcruiser troop carrier, modified to store a surfboard, Vitamix juicer and clothes; it is funny how these things immediately came to mind as essentials. I’m sure there are many other more practical things like sleeping bags, cooking pots and insect repellent that would be essential too. This was more a holiday fantasy than something I would really like to do. If I were to make an extended trip it would be on a motorcycle; similar to the one-month road trip over summer. 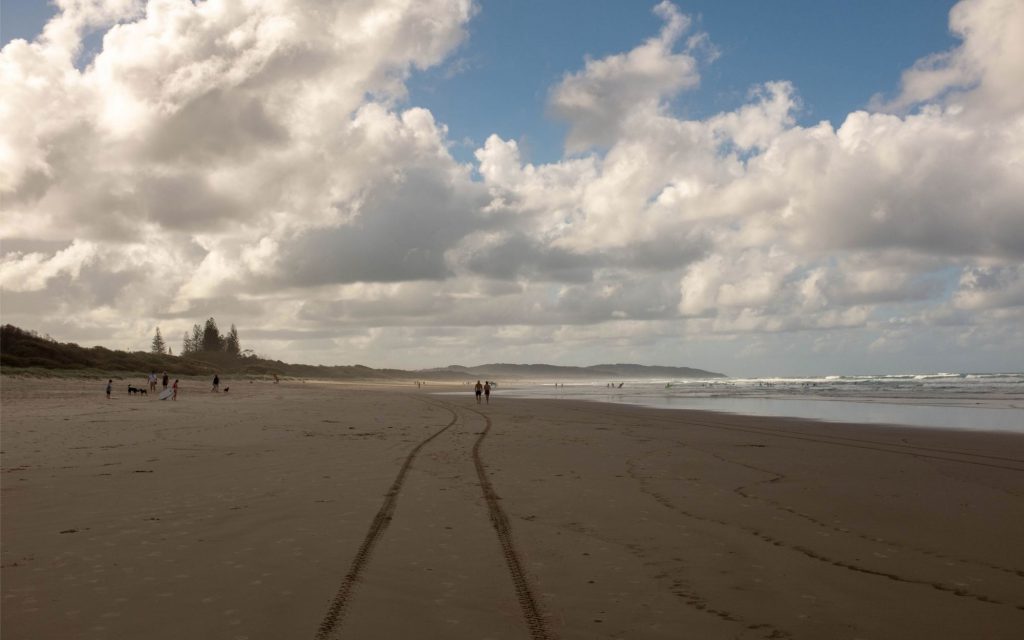 After all that mental wanderlust, I walked for a couple of hours around Ti Tree Lake and Lennox Beach before meeting friends for a swim at Shelley Beach. They suggested dinner at Quattro, an Italian restaurant in Lennox Head. There we had a good meal of pizza and salad at this popular eatery before setting out for a nighttime walk along the beach. There is something so utterly foreign about walking on the beach in the dark. There was a sky full of stars, twinkling in between the clouds and I’m glad to have walked here in the night.

That night we stayed at the Ramada in Ballina, overlooking the river. This meant swimming with the locals at Shaw’s Bay, a protected inlet which offers a large swimming area. As always, it is a great way to kickstart the day with exercise close to nature. A breakfast of fruit from Woolworths and croissants from the nearby bakery and I sat overlooking the water on the balcony of our hotel room.

For our last meal of the trip, it was a fresh seafood platter at the Wharf Bar & Restaurant, an Italian restaurant overlooking the water. This was good cooking with fresh ingredients and capped off an excellent long weekend away.