The weekend began with us fussing over what to pack for the -2 to 6 degrees forecasted temperatures. Settling on practical outdoor gear—Scarpa hiking boots, Pendleton woollen jumper, Patagonia waterproof jacket, Best Made sheepskin vest and lederhosen knickerbockers—we went out for coffee and croissants at Paramount Coffee Project. Our friends arrived, and it was off westward towards the Blue Mountains. The cosy warmth of the car quickly dissipated in the 75 kilometres per hour winds as we opened the doors in Katoomba. This necessitated one or two critical purchases for our unsuspecting fellow travellers. 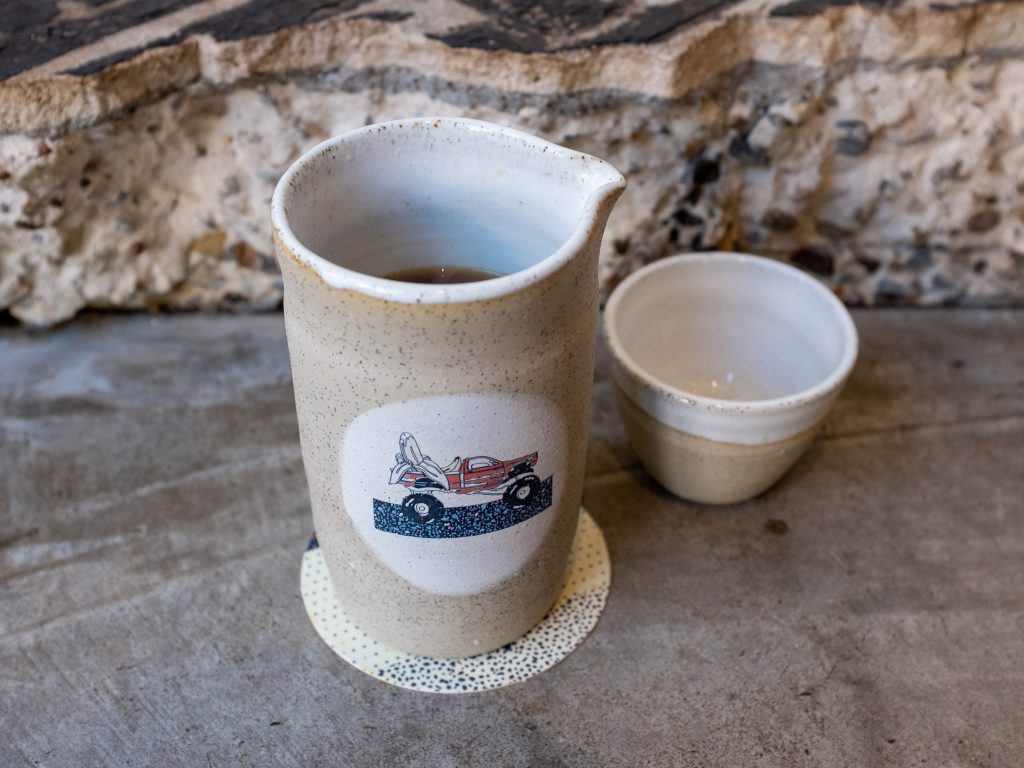 Arriving on Leura’s quaint main street, it is a charming town in spite of the freezing wind and sleet. Our lunchtime reservation was at Silks, where we were seated in the window overlooking the street. The establishment’s hearty and delicious food was the perfect juxtaposition to the weather outside. My large plate of bratwurst sausages with mash potatoes and beans, followed by apple and rhubarb crumble for dessert was the ideal start to our time in the mountains. A post-lunch walk around the town included a spot of shopping at the Leura Fine Woodwork Gallery before we strolled to our rented cottage.

The house was situated on a prosperous street with the Elysian Rock Lookout and Leurella Toy and Railway Museum nearby. Elysian Rock Lookout offered beautiful views as the sunset against the basalt cliffs of Surprise Point. The bitterly cold wind, however, made for a relatively short excursion with the cottage’s open fire proving too strong a temptation. That night we enjoyed the cosy rooms and wood fire as it contrasted sharply with the below zero temperatures outside. We played board games, drank tea and ate buttered fruit cake. 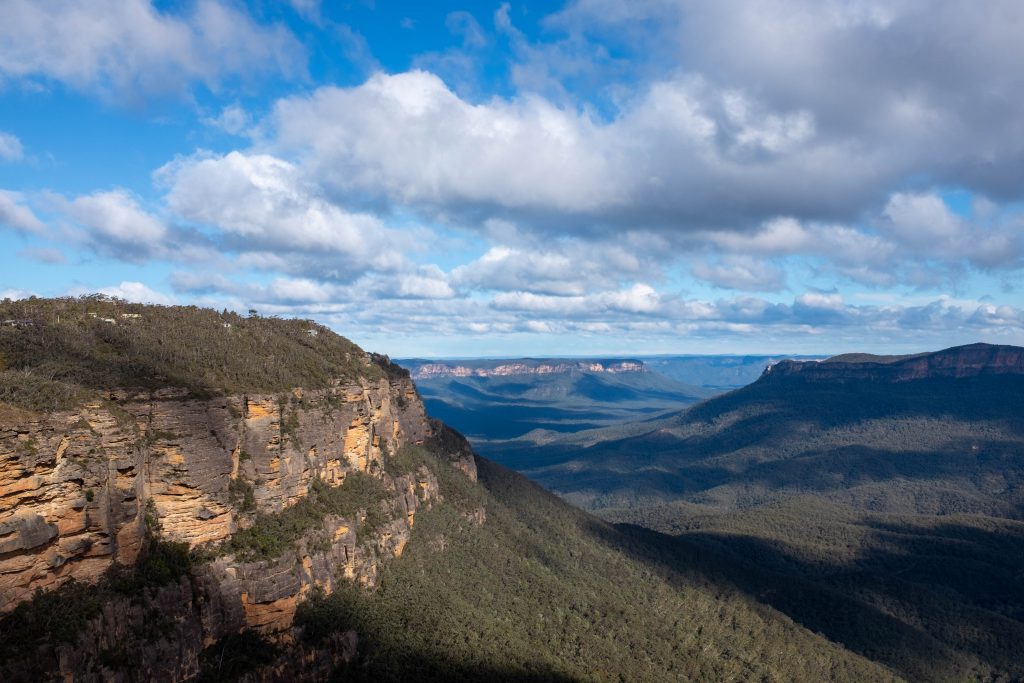 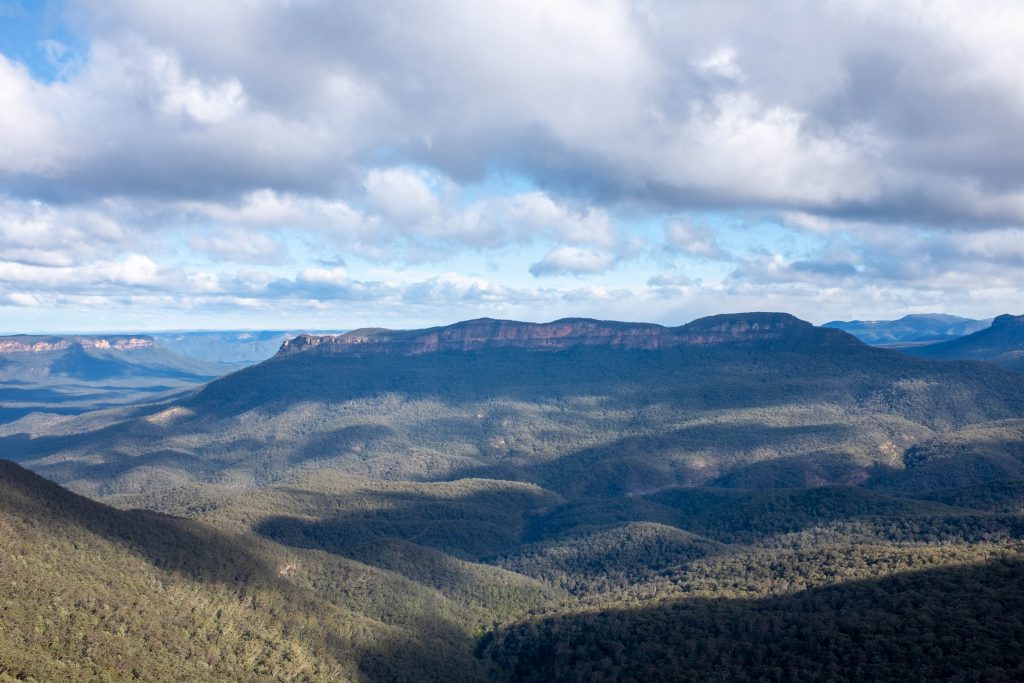 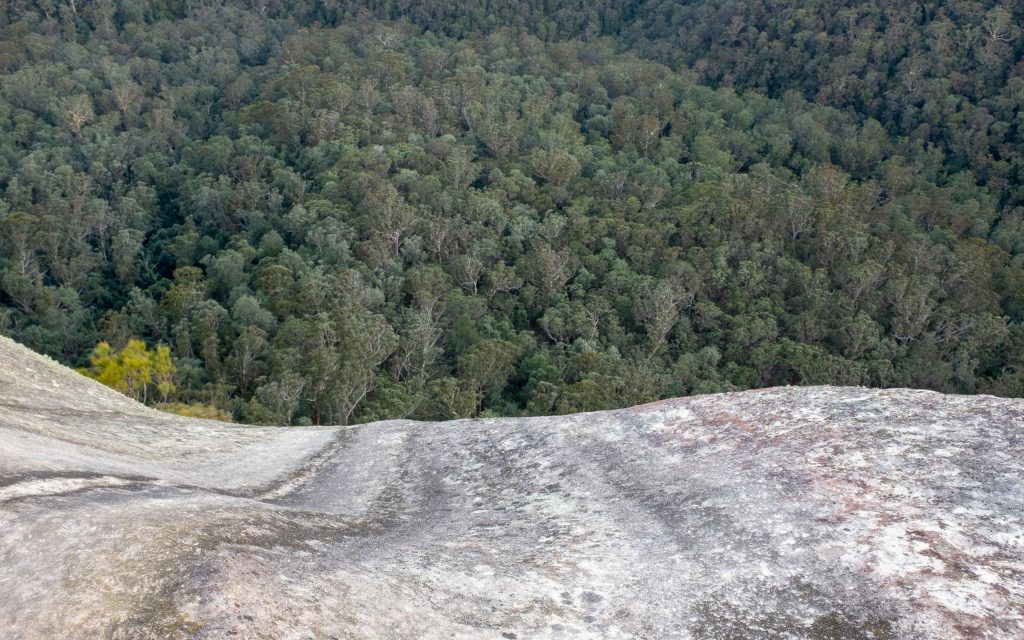 The next day we woke at 5.30 am to below zero temperatures as we readied ourselves for a daybreak exploration of Govetts Leap. As we were making tea, one of our group yelled out that it was snowing outside. Dropping everything, we dashed outside to find a couple of inches of snow has fallen overnight. 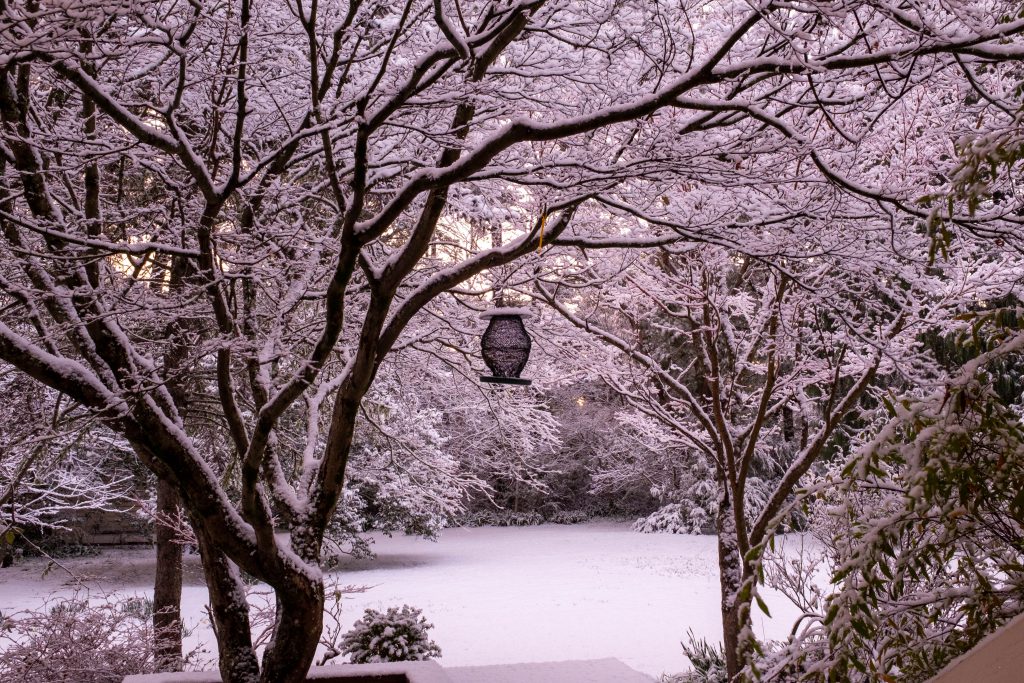 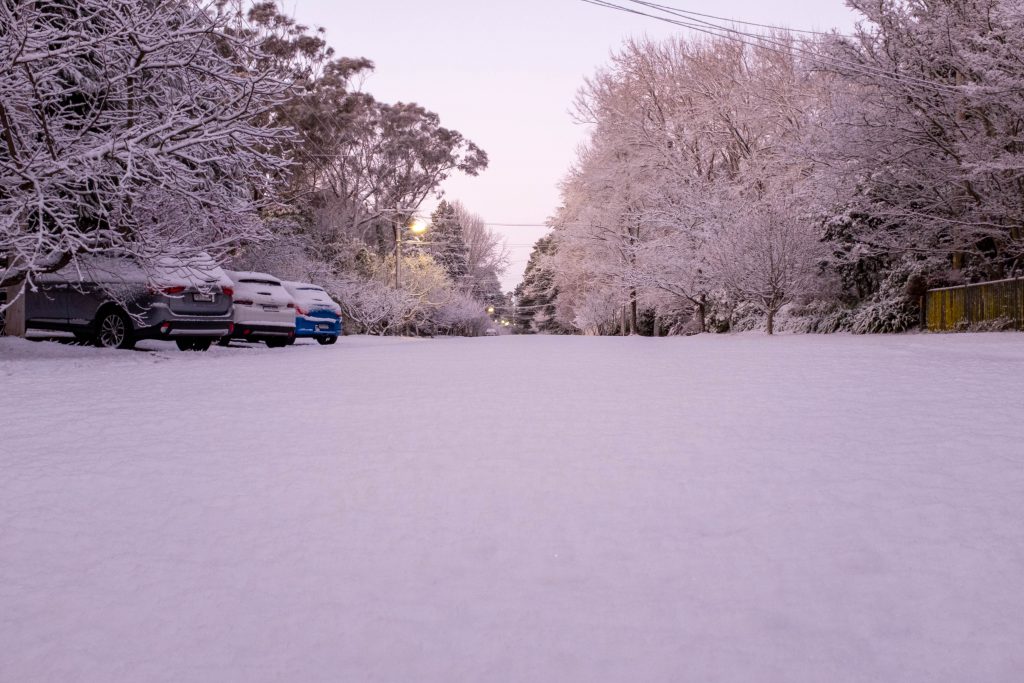 Instead of risking the drive to Govetts Leap, we set off across the virgin snow to watch the sunrise at Elysian Rock Lookout. The sense of wonder was palpable, as the snow crunched underfoot. At the lookout, clear skies with the first hint of pink and orange highlighted the areas natural beauty. As the sun rose on the Three Sisters, there was a light dusting of snow which increased significantly over the next ten minutes, blocking out any view of the valley floor below. This highlights just how important it is to be prepared in the mountains as weather changes can be dramatic and fast. 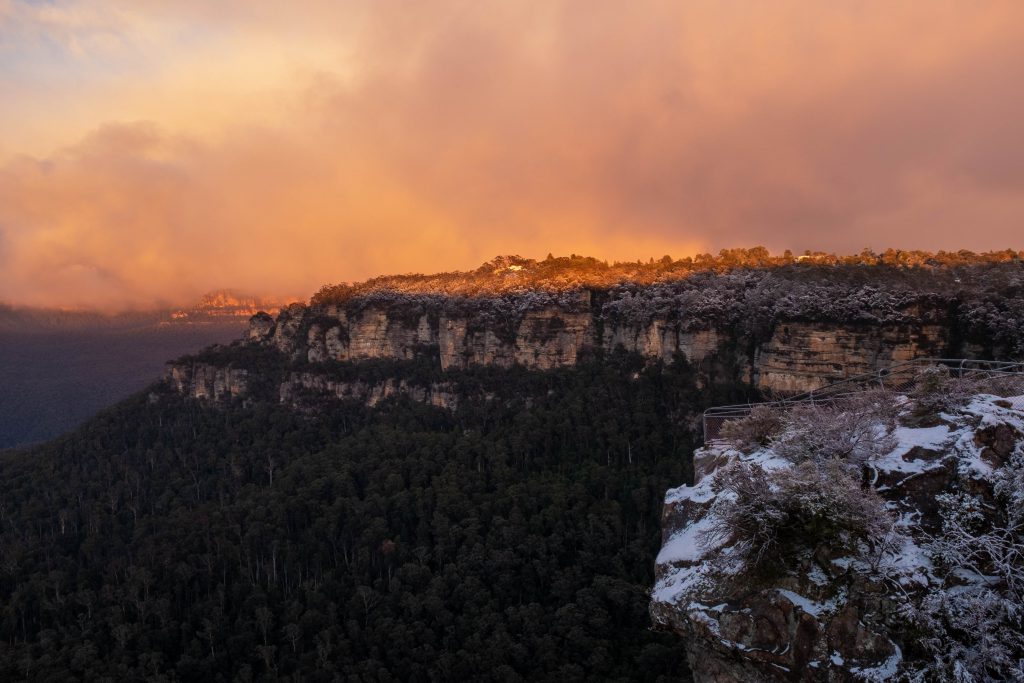 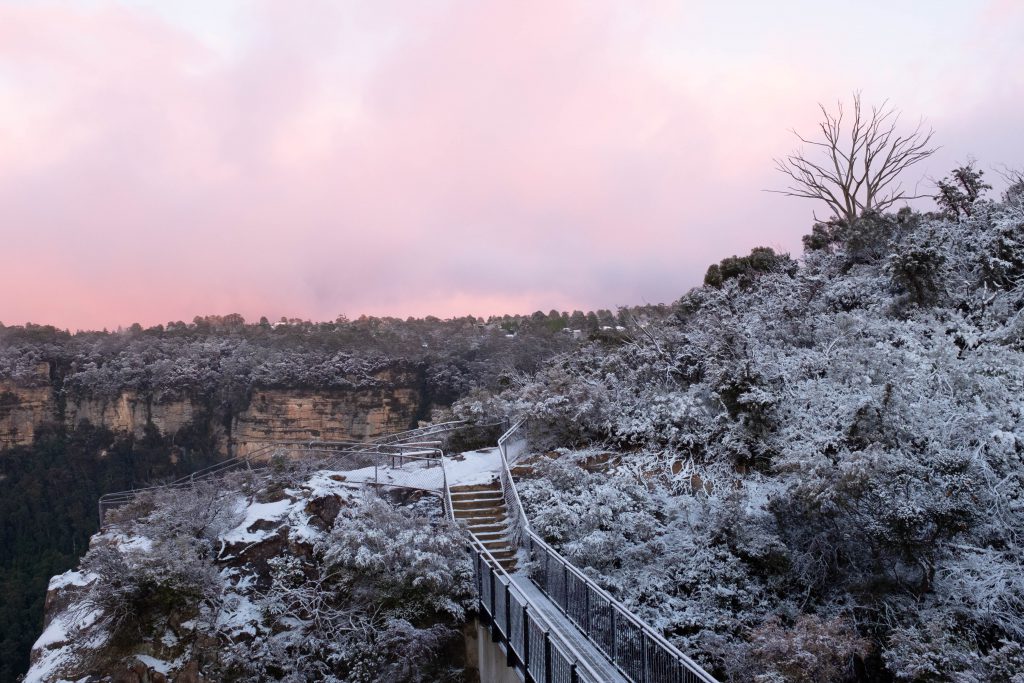 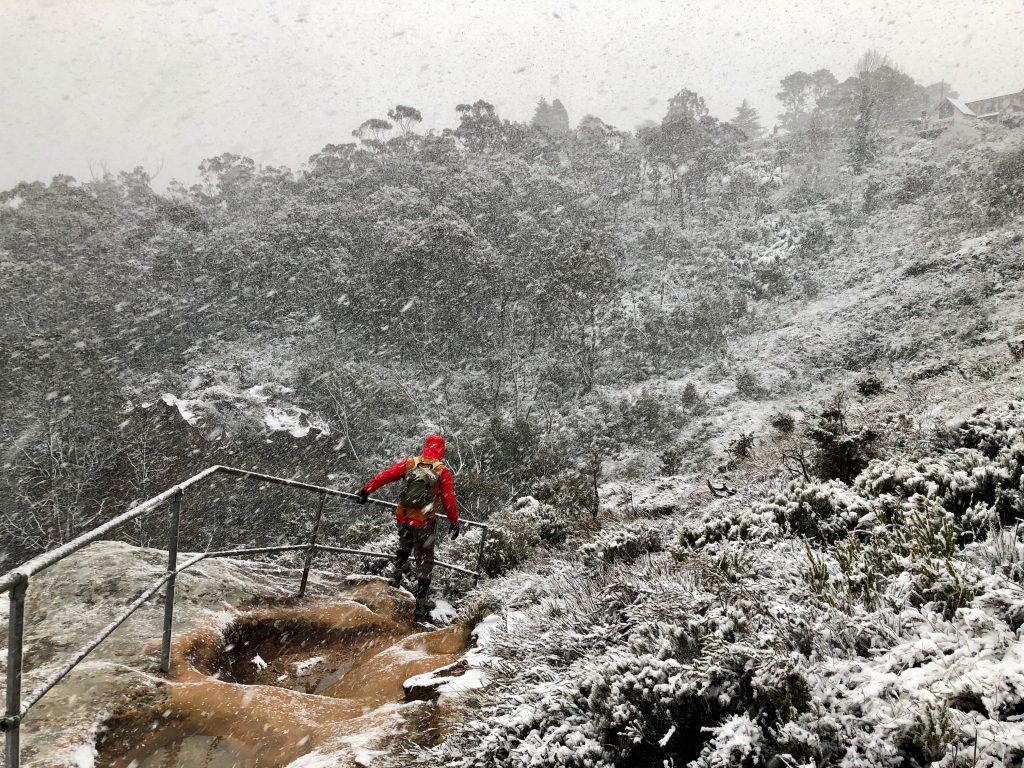 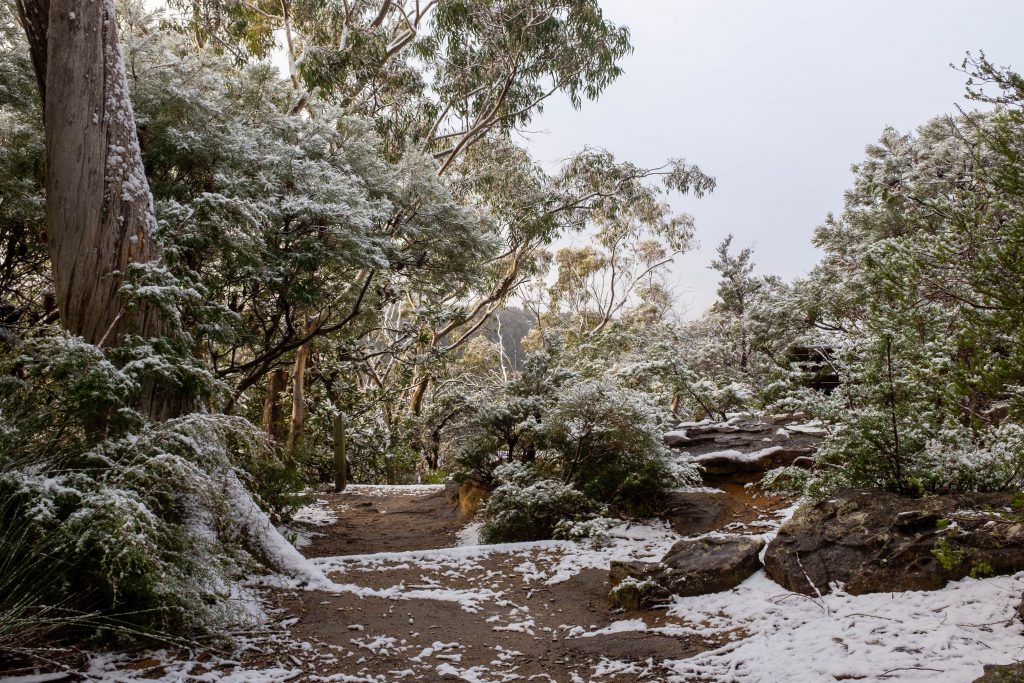 Hiking one of the area’s smoother trails, it was a delightful surprise to see this level of snow so close to Sydney. It was a joyful experience, made all the more enjoyable by having the appropriate gear. I find that there is a sense of pleasure that is derived from having selected the right equipment. Toasty and warm, we wandered by a small park where we built a snowman. One of our friends spent time in Switzerland as a child and showed me how to roll the snow with mine ending up looking slightly like a chipmunk snowman. 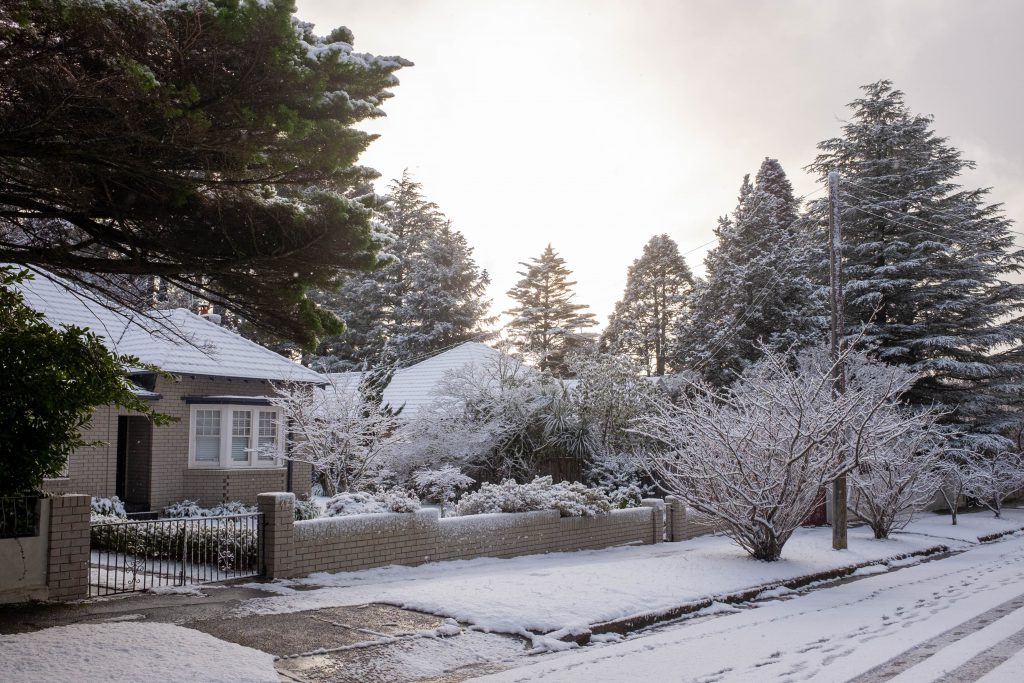 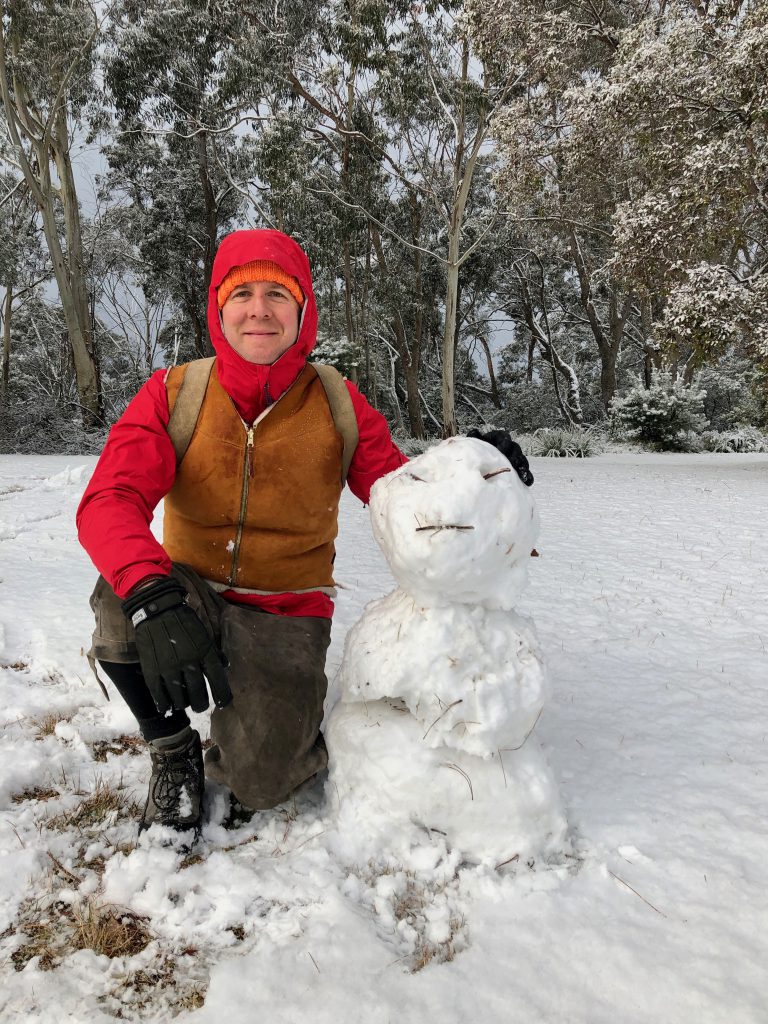 The snowfall became heavier as we looked for a cafe to eat breakfast. To our surprise, not much was open that early in Leura, leading us to buy provisions for a cook up back at the house. Building another fire, we feasted on bacon, eggs, mushrooms and toast from the local bakery, all the while listening to classical music and watching the snowfall. It was lovely. 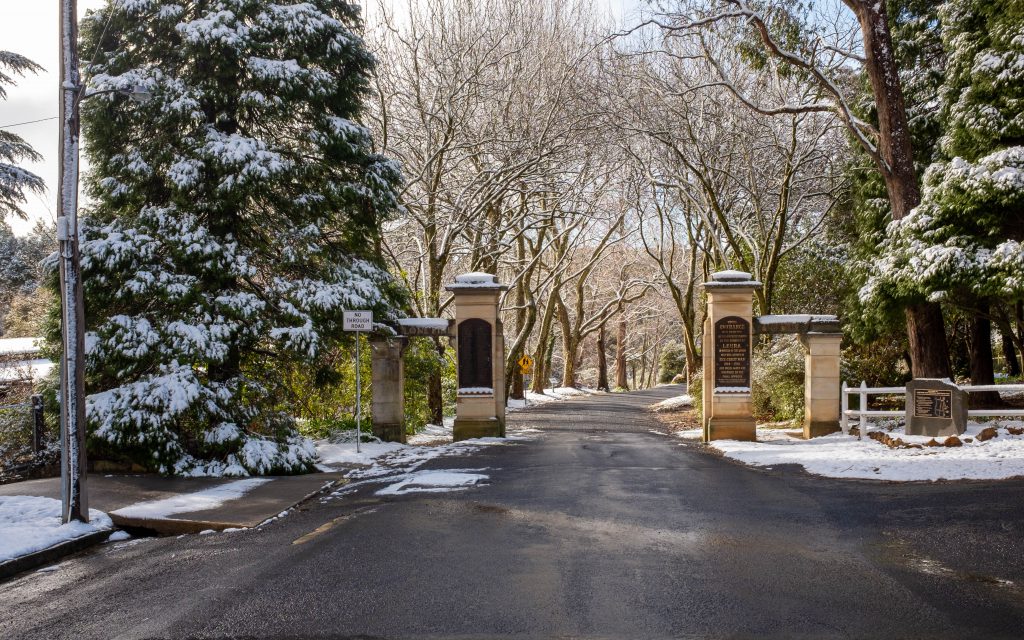 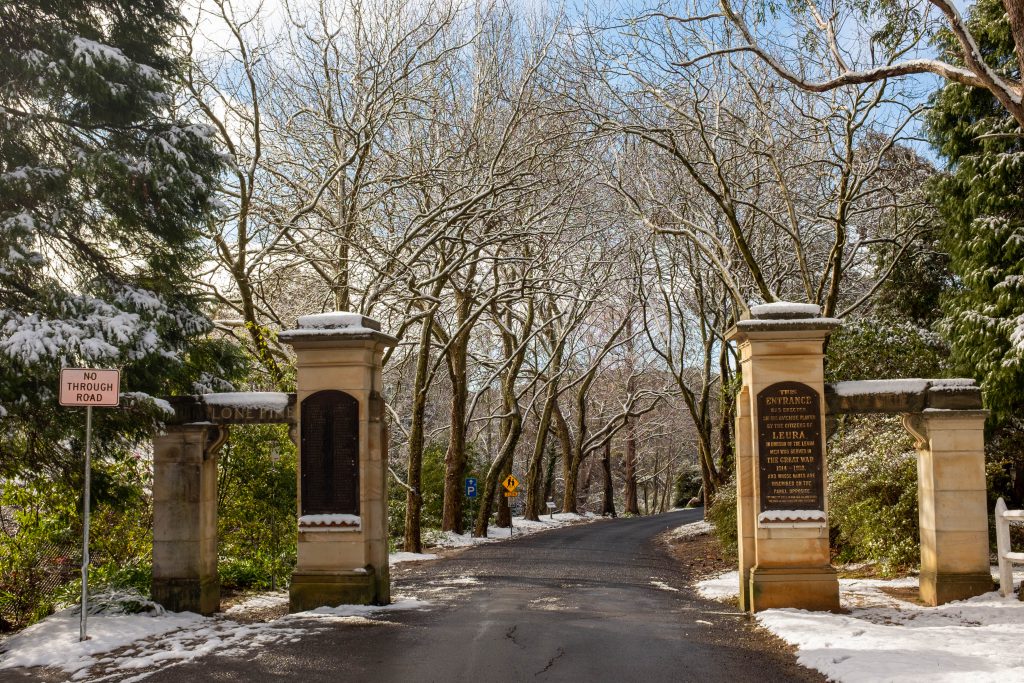 After a rest in front of the fire, we set out to visit the Leurella Toy and Railway Museum. On the way, it was interesting to note that while only a couple of hours earlier the whole area had been covered in snow, in contrast almost all the snow had now melted. The Leurella Toy and Railway Museum are housed in the 1912 Evatt family home, an impressive estate covering twelve acres of land. The extensive collection of toys houses late 19th and 20th-century treasures including multiple eras of Barbie dolls, James Bond toys, models of every description and some slightly creepy dolls. There are also model train rooms and full-sized train memorabilia in the gardens. The house and collection are both impressive, although there is a slight sadness to the place. 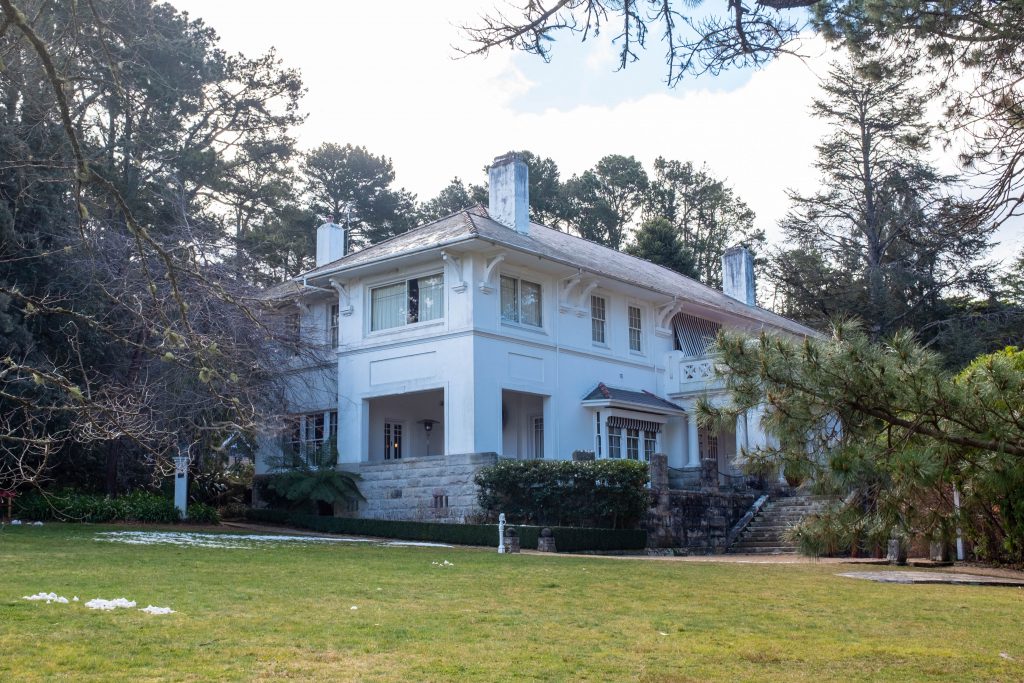 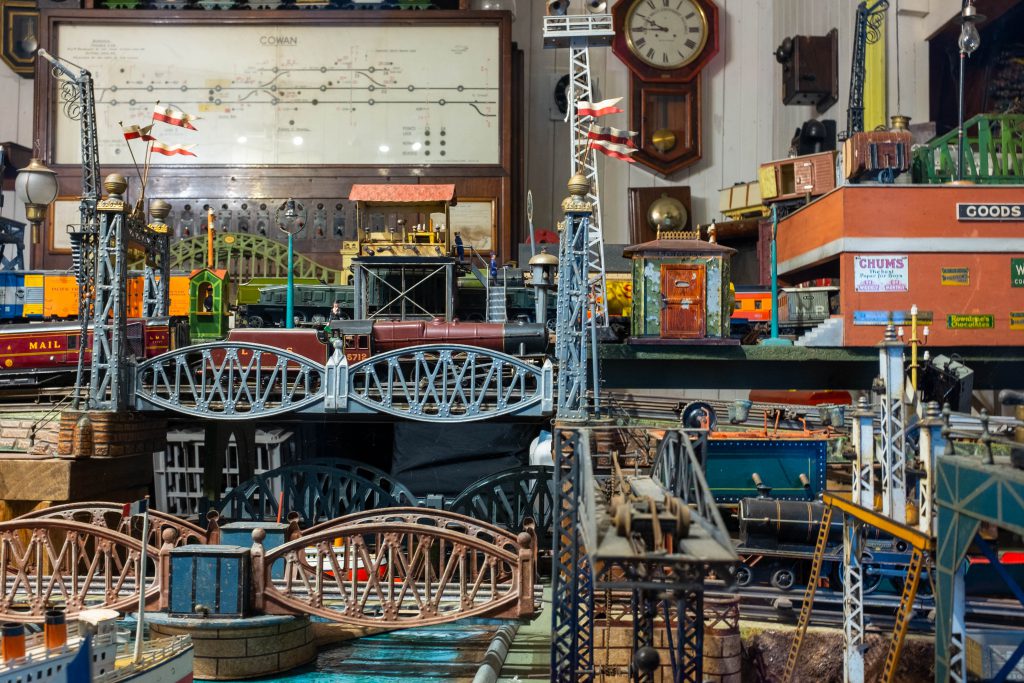 Next morning, the thermometer was hovering around zero, although there was none of the snow of the previous day. We set off before dawn for Govertts Leap Lookout to take photos and walk one of the trails. Nature put on its dawn light show with oranges, pinks and purples as the sun rose over the valley. Halfway along the trail, we had the pleasure of snow flurries, as the large snowflakes floated downwards onto our clothes. This was a lovely thing to see. Similar to when you are hiking in the rain, the forest becomes still as the snowfalls. This was a wonderful way to start the day. 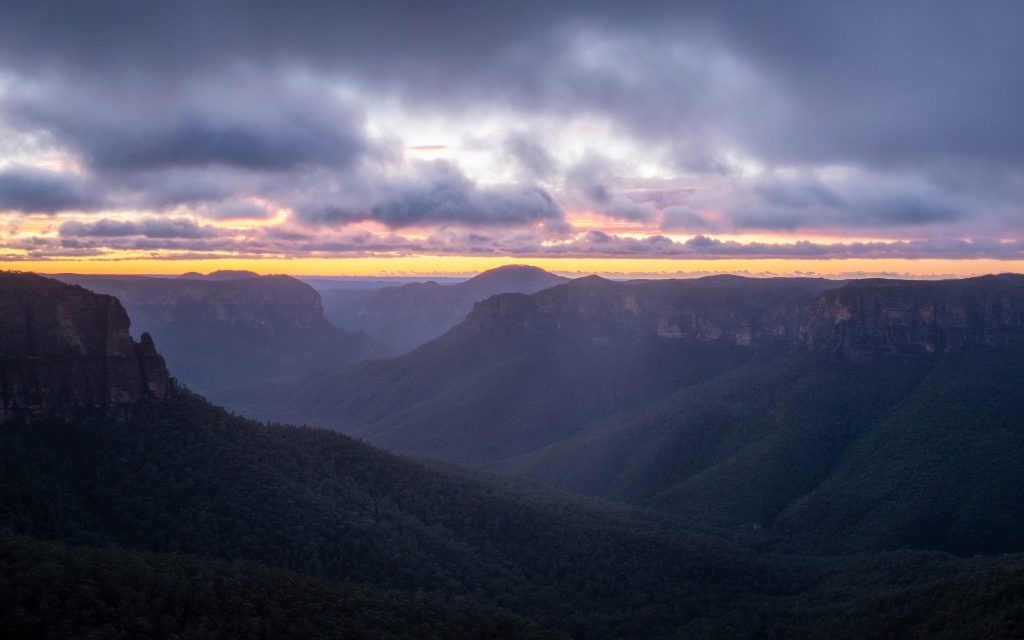 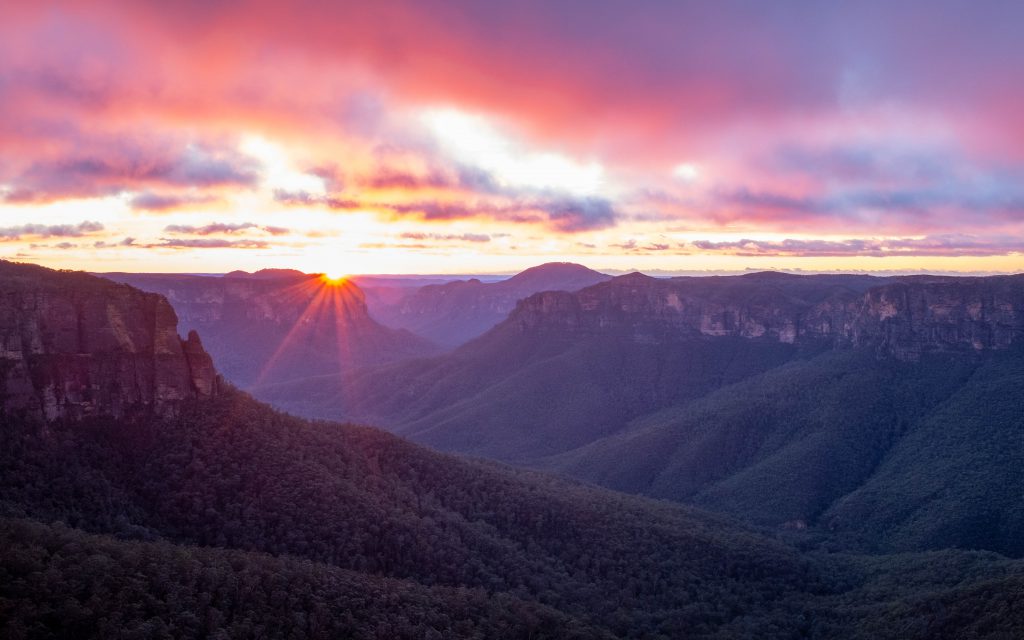 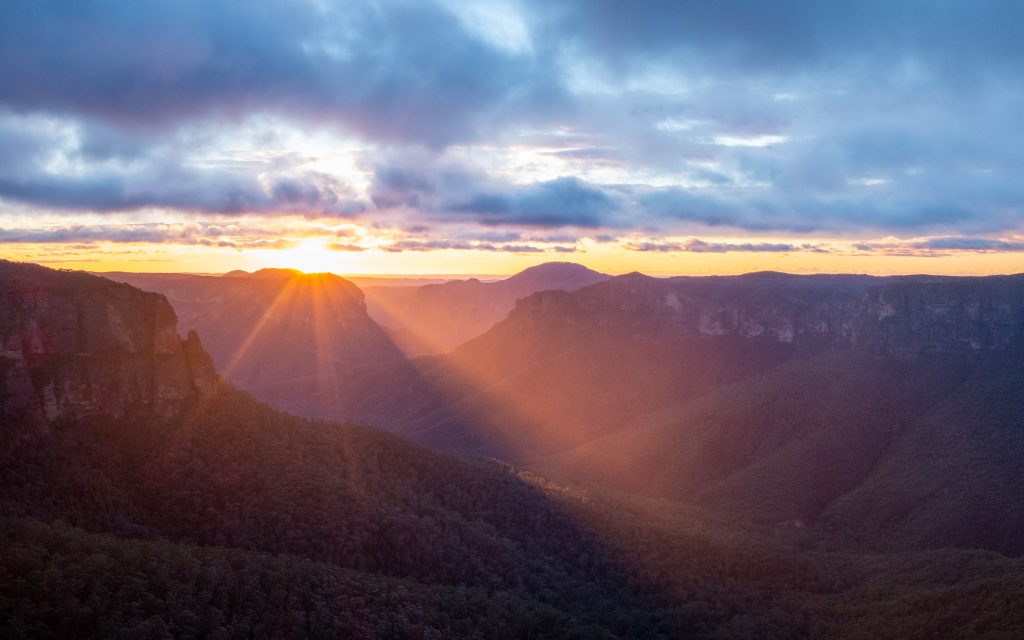 Driving to breakfast in Blackheath, the snowfall became heavier as the temperatures dropped below freezing. A careful drive down the mountain to Leura followed before we headed off to see the Norman Lindsay Gallery with its plethora of nude paintings and statues. At the Gallery, the Corvette car club was visiting, offering an equally stunning sight with a range of Stingrays on display from various eras. 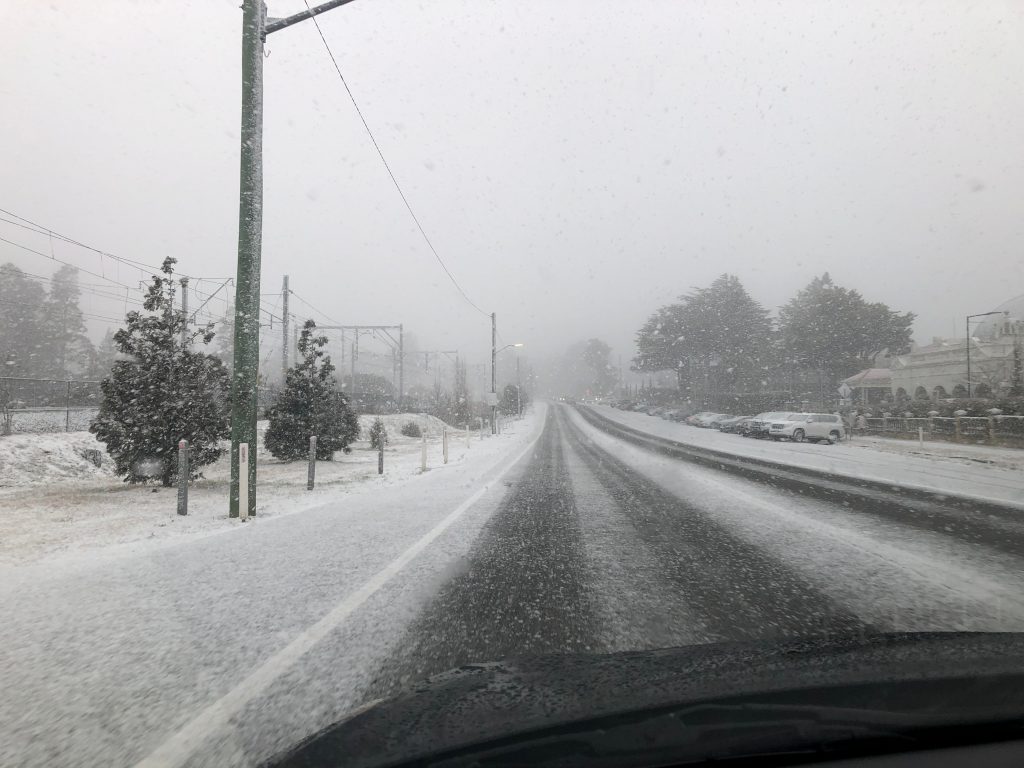 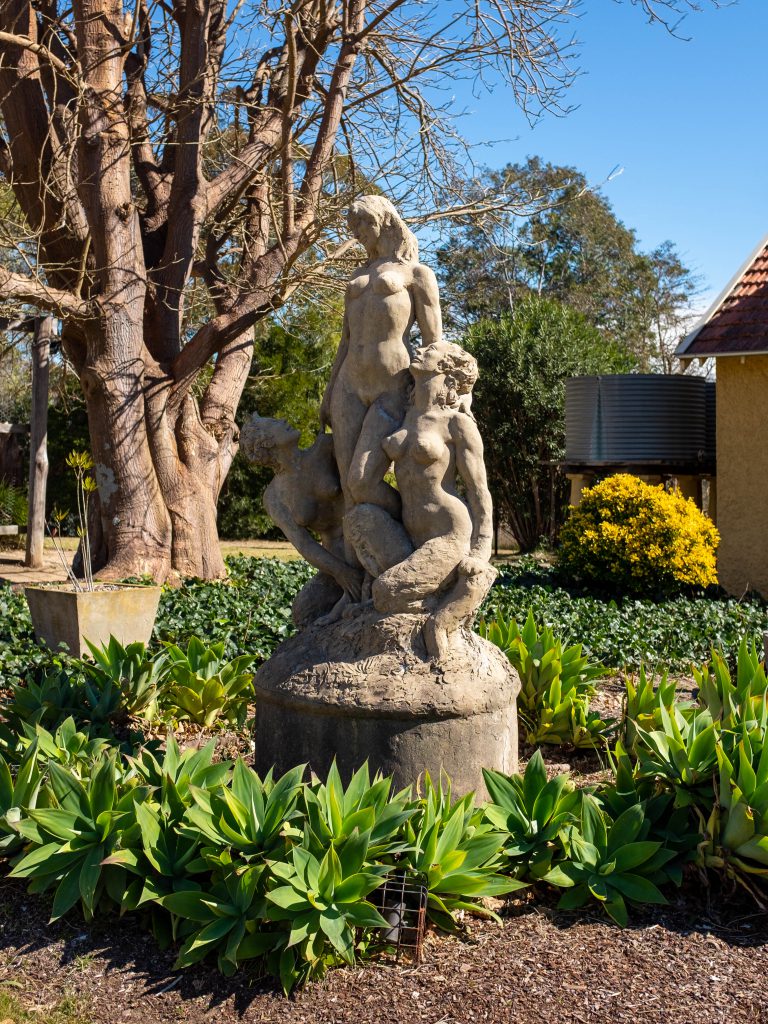 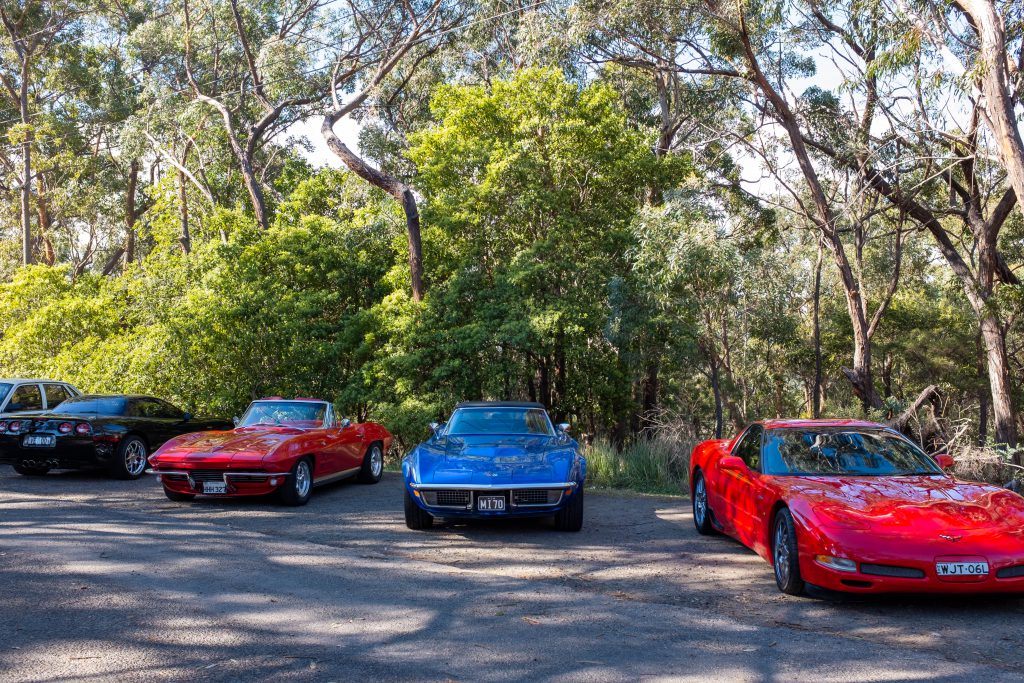 This trip was a delight, accentuated by the serendipity of being in the Blue Mountains at precisely the right time to see snow. The snow only existed for a few short hours, which we could have so easily have missed, reminding us to make the most of these fleeting and serendipitous moments.